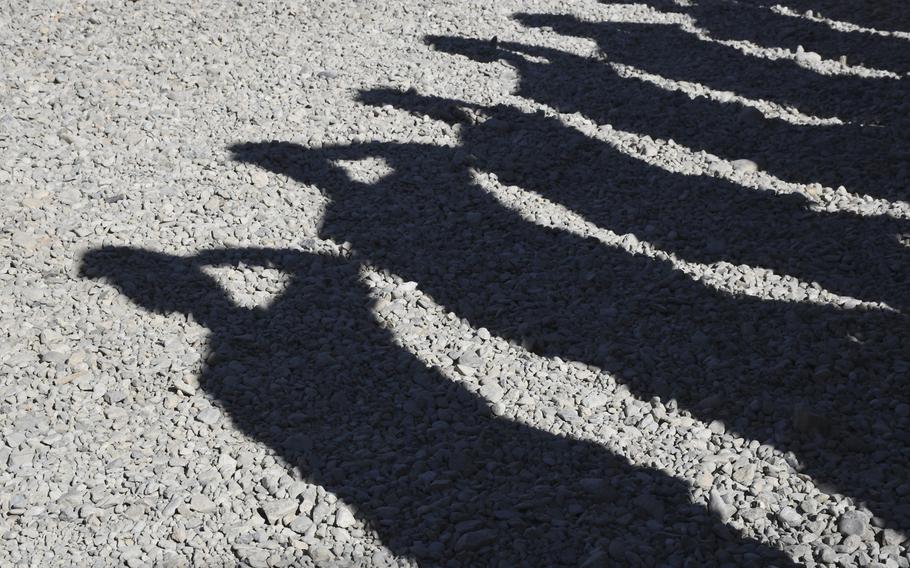 Buy Photo
The shadows of a formation of Marines saluting are seen at Camp Shorab, Afghanistan, where U.S. military advisers will consolidate after closing a base in the nearby city of Lashkar Gah, beginning March 10, 2020, as part of a withdrawal deal with the Taliban. (Chad Garland/Stars and Stripes)

KABUL, Afghanistan — U.S. troops have pulled out of a key base in Afghanistan’s southern Helmand province, the site of some of the fiercest fighting of the war, officials said Friday.

U.S. advisers withdrew from Bost Airfield outside Helmand’s capital of Lashkar Gah, as part of a deal signed with the Taliban two weeks ago, said Omar Zwak, the provincial governor’s spokesman.

About 100 troops transferred from the airfield to Camp Shorab, a larger base about 12 miles to the northwest, formerly known as Camp Leatherneck, he said.

The Americans have also begun pulling out of Tactical Base Gamberi in Laghman province, east of Kabul, a tribal leader there said.

For the past few days, tribal elder Haji Shah Mahmoud said he has seen large numbers of helicopters flying in and out of the base, which is next to his village.

“I thought there must be a huge military operation going on,” Mahmoud said. “(Afghan) soldiers told me that, actually, they are American forces leaving.”

The drawdown began Monday, the U.S. military said in a statement this week. The terms of the U.S.-Taliban deal state that American forces would pull out from five bases and reduce troop numbers from about 13,000 to 8,600 by mid-July.

Troops have also begun to withdraw from a base in the western province of Herat, an unnamed U.S. official told Agence France-Presse on Tuesday.

U.S. Forces-Afghanistan, declined to comment on specific base closings.

After previously withdrawing from Helmand province as part of a large-scale drawdown in 2014, the U.S. returned to the provincial capital the following winter with about 100 soldiers as part of an “expeditionary advising package” to help bolster security there.

But amid increasing insecurity in the province, U.S. Marines were sent back to the province to strengthen the training and advising for government forces battling the resurgent Taliban.

The province, considered the birthplace of the Taliban, has claimed the most lives of U.S. and British troops since the 2001 invasion.

If the U.S. military leaves again, some locals fear it will likely see a repeat of the 2015 Taliban offensive, they told Stars and Stripes last year.

“Security is going to get worse,” said Haji Abdul Ali Sarwari, a civil activist living in the provincial capital at the time. “We have experience.”

On Friday, provincial council leader Saiful Malook Noori welcomed the American withdrawal and said he hoped it would usher in peace with the insurgent group. Under the terms of its deal with the U.S., the Taliban agreed to break ties with international terrorist groups and broker a durable peace agreement.

“We were told by the local authorities that according to the deal with the Taliban, this base will be closed and its forces will finally leave Afghanistan,” Noori said. “If Taliban also fulfill what they agreed to, it will be good for Afghanistan.”

U.S. officials have publicly expressed doubts that the Taliban will hold up its end of the agreement. Officials have said the militants are continuing to carry out violent attacks at a level greater than agreed to under the deal, though those specific terms remain classified.