US troop numbers in Afghanistan drop to lowest level since 2001 U.S. Army helicopters train at Camp Dahlke, Afghanistan, in December 2018. U.S. and NATO forces have left the base, formerly Forward Operating Base Shank, as the drawdown of U.S. troops in the country continues. Troop levels in Afghanistan are now at a 19-year low, President Donald Trump said in a statement on Jan. 14, 2021. ( Kristoffer Sibbaluca/U.S. Army)

U.S. Army helicopters train at Camp Dahlke, Afghanistan, in December 2018. U.S. and NATO forces have left the base, formerly Forward Operating Base Shank, as the drawdown of U.S. troops in the country continues. Troop levels in Afghanistan are now at a 19-year low, President Donald Trump said in a statement on Jan. 14, 2021. ( Kristoffer Sibbaluca/U.S. Army) 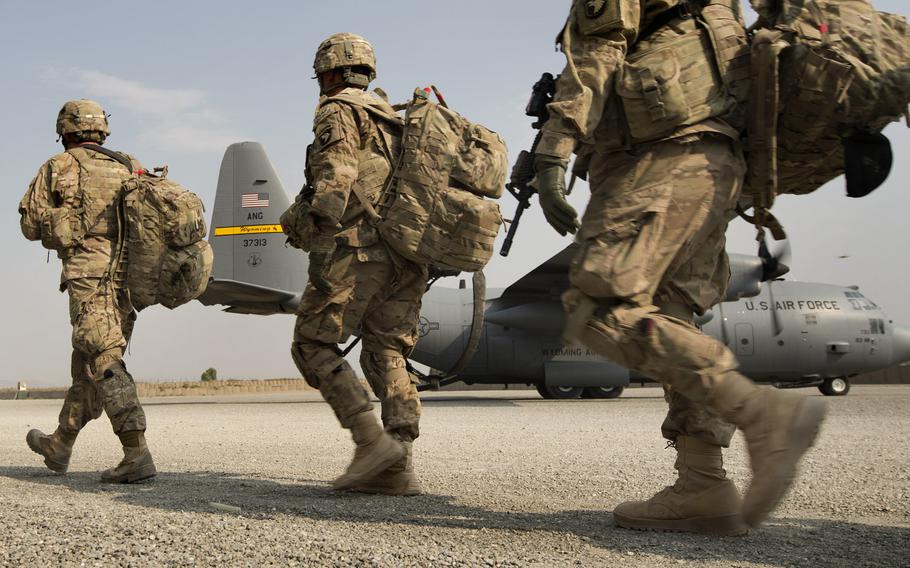 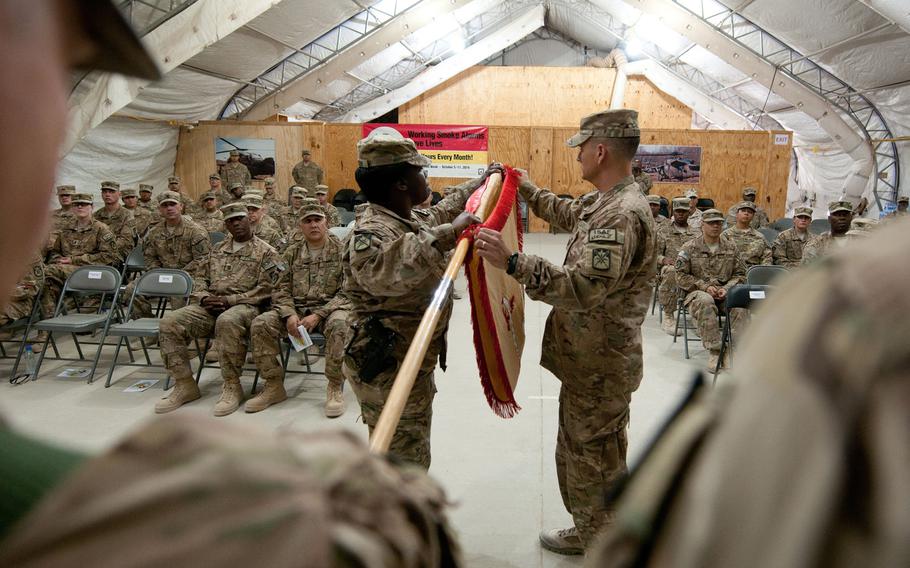 The United States has reduced troop levels in Afghanistan to 2,500, the lowest number since the war’s earliest months, despite recent passage of a federal law that sought to prevent an immediate drawdown during peace talks with the Taliban.

“The United States is closer than ever to ending nearly two decades of war and welcoming in an Afghan-owned, Afghan-led peace process to achieve a political settlement and a permanent and comprehensive ceasefire,” Acting Defense Secretary Christopher Miller said in a statement Friday.

The White House announced in November that the number of U.S. service members in Afghanistan would drop to 2,500 by Friday, and force levels have drawn down gradually since.

The 2021 National Defense Authorization Act prevents the Defense Department from using funds to reduce troops below that of force levels when the law was enacted Jan. 1 without a report to Congress assessing the effects and implications.

Under an agreement Washington signed with the Taliban last year, all international forces could withdraw from the country by the middle of this year.

The smaller number of U.S. troops — down from roughly 13,000 a year ago — will continue to support NATO’s training and advising mission, and a separate counterterrorism mission, U.S. Forces-Afghanistan said.

“This [reduced] force has the appropriate lethality and the U.S. government retains its counterterrorism capacity in Afghanistan,” Gen. Scott Miller, the top American commander in the country, said in an emailed statement Monday. “We still have the ability to provide train, advise and assist at ministerial levels and most core levels.”

But repeated criticism of the war by Trump, who campaigned on ending it, has led some analysts to question whether the revised figure was based on political motivations rather than conditions on the ground.

“I like the [higher] number much better than 2,500, but there are few iron rules in this business and it’s possible we could scrape by at 2,500,” Michael O’Hanlon, a defense analyst at the Washington-based Brookings Institution, said in an email. “I’m not sure I see the point of playing such a numbers game, though.”

More than 10 bases closed in 2020, The Washington Post reported in November. Since then, U.S. and NATO forces have also left Camp Dahlke, formerly Forward Operating Base Shank, Afghan army and USFOR-A officials said.

Advocates of a total withdrawal argue that counterterrorism operations can be conducted without basing any troops in Afghanistan, and that the residual number is meaningless.

“Just to be clear, 2,500 [troops], tactically speaking, won’t do anything. It won’t allow you to eradicate a terrorist presence, all it will do is let you periodically pick off individuals,” said Daniel L. Davis, a retired Army lieutenant colonel and senior fellow for Defense Priorities, a right-leaning Washington think tank. “It doesn’t do any good to keep one soldier there.”

President-elect Joe Biden has yet to announce a detailed plan for Afghanistan but said in interview last year with CBS News that he supported keeping “several thousand” American troops in the country to fight threats posed by al-Qaida and the local Islamic State affiliate.

The Taliban have rejected the idea of a continued U.S. presence. The group began talks with the Afghan government in September, which in addition to assurances it won’t support terrorism, are a necessary condition for the full withdrawal of international troops outlined in last year’s peace deal.

As the talks continue, so too does the violence, with the Taliban repeatedly denying calls for a cease-fire.

While the latest reduction of U.S. troops could motivate delegates to agree on difficult concessions and move the peace process forward, it could also undercut discussions by highlighting the vulnerabilities of Afghan forces in the face of a bloody insurgency that is likely to intensify, said Michael Kugelman, an expert on the region.

“In effect, the drawdown to 2,500 troops will bring to the surface the festering tensions between Kabul and the Taliban on the issue of violence, and such tensions could poison an already volatile negotiating environment,” said Kugelman, who is deputy director of the Asia Program at the Washington-based Wilson Center.

Some 8,000 troops from countries besides the U.S. continue to support NATO’s training mission. As of October, more than 17,000 foreign contractors were working in Afghanistan, of which roughly 8,000 were American, DOD data showed.

Afghan security forces, who conduct most of their operations independently, don’t appear too concerned that the latest drawdown of American troops will impact the battlefield, said Gen. Abdul Mateen Sulaimankhail, a former brigade commander in eastern Logar province.

However, he worries further reductions could be devastating.

“American air support is still very much needed, so if the U.S. at least keeps forces in the country to maintain airstrikes, we’ll be fine,” Sulaimankhail said. “If we lose that support, there will be total chaos.”

Stars and Stripes reporters J.P. Lawrence and Zubair Babakarkhail contributed to this report.