US, Russian generals met to discuss ISIS operations in Syria 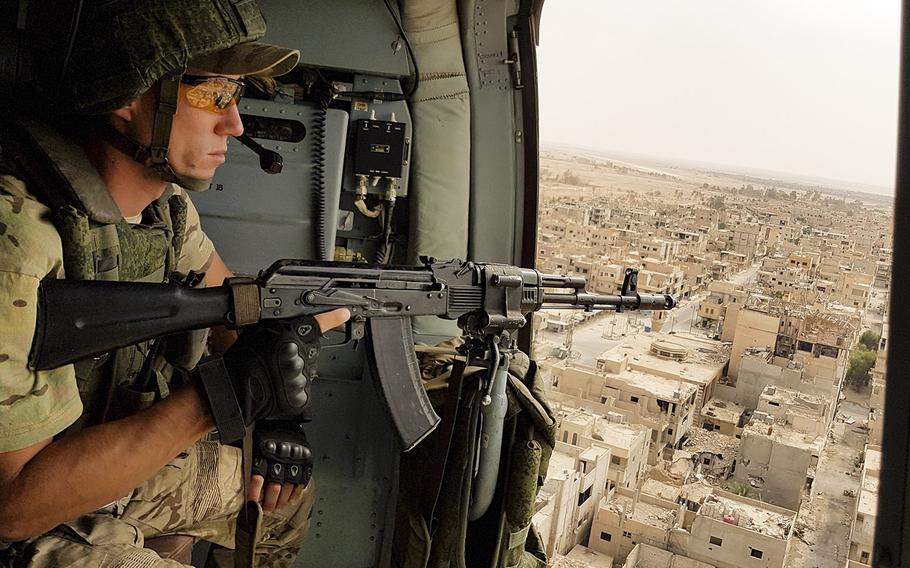 A Russian soldier guards as a military helicopter flies over Palmyra, Syria, on Friday, Sept. 15, 2017. (AP)

A Russian soldier guards as a military helicopter flies over Palmyra, Syria, on Friday, Sept. 15, 2017. (AP) 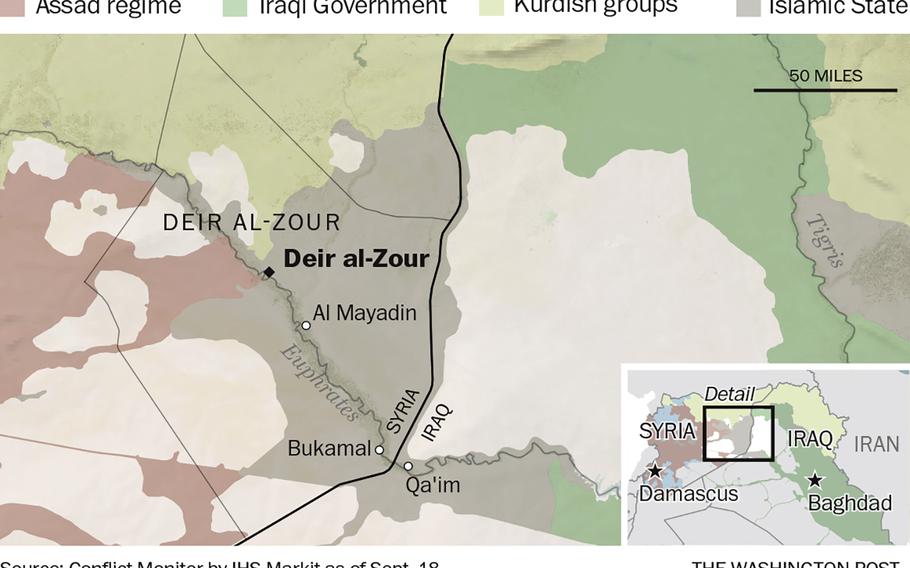 WASHINGTON – Generals with the U.S.-led coalition fighting the Islamic State met face-to-face with their Russian counterparts recently to discuss ways to keep forces they support in Syria separated on a shrinking battlefield, a U.S. military spokesman said Thursday.

The top military officers spent hours discussing locations of ISIS fighters in the Middle Euphrates River Valley, using maps and graphs to describe where each sides’ partner forces were operating and planning to go during the first-of-its-kind meeting in the Middle East, said Army Col. Ryan Dillon, a spokesman for the Operation Inherent Resolve coalition. Dillon declined to specify precisely where or on what day the meeting was held, adding another meeting like it could take place soon.

The meeting was held as Russian-backed Syrian forces assault the ISIS-held city of Deir al-Zour, about 80 miles southeast of Raqqa along the Euphrates River, and U.S.-backed Syrian Democratic Forces advance south through rural Deir al-Zour Governorate toward the city.

“Because of that proximity that is why we had this face-to-face meeting,” Dillon told reporters at the Pentagon from his post in Baghdad. “So that we don’t inadvertently fire upon one another, so we can stay focused on ISIS, and so we can continue to maintain support to our forces both from the air and to our forces on the ground.”

Both sides have pledged to keep their weapons pointed at ISIS for now, however each side has accused the other of attacking them in recent days.

The U.S. military said SDF fighters were struck and injured Sept. 16 by a Russian aircraft with American special operations advisers nearby. The Russian military said Thursday that SDF fighters and those U.S. commandos have at least twice fired rockets and mortars into Syrian positions with Russian special forces nearby. The Russians warned they would return fire if it happened again.

Dillon neither confirmed nor denied the Russian claims Thursday, but he said such claims illustrated the necessity of the continued talks.

But Dillon denied the United States and Russia were coordinating their efforts to defeat ISIS, a move that would be illegal under current law.

A measure in the annual bill that funds the Pentagon has barred the U.S. military from working hand-in-hand with the Russian military since 2014, a response to Russia’s annexation of Crimea and its continued meddling in the Ukrainian civil war.

It was not clear whether American generals were present at the recent meeting. Dillon and spokesmen at the Pentagon would only say coalition generals participated.

Despite the daily talks, Dillon said the coalition and the Russians ultimately have differing goals in Syria, where the United States is focused only on eliminating ISIS and the Russians are working to prop-up embattled regime of President Bashar Assad.

“I would not call it a chummy relationship,” Dillon said. “It is professional….It is so we know where they are and they know where we are and we can continue our efforts to defeat ISIS.”

It was also unclear where the SDF or forces backing the Syrian regime would move once Deir el-Zour is cleared of ISIS. The SDF’s primary focus for now remains in Raqqa, the former ISIS capital, where the U.S-backed fighters have liberated about 70 percent of the city, Dillon said. The group aims to continue southeast to eliminate remnants of ISIS along the Euphrates River that extend to Syria’s border with Iraq.

The SDF are expected to remain to the east of the Euphrates River, at least around Deir el-Zour, to retain a safe distance from Assad’s forces, a U.S. official said on the condition of anonymity. However, the two sides have not finalized plans for maintaining a safe distance from the other farther east in the valley if regime forces continue in that direction.

“We want to continue down into areas where ISIS is,” Dillon said Thursday. “… The progress that has been made by the Syrian Democratic Forces and the coalition speaks for itself. Just look through northern Syria and all the locations the Syrian Democratic Forces have liberated from ISIS – more than 43,000 square kilometers – and none of it, not a single inch of it has been ceded back to ISIS.”