US personnel in Bahrain prepare for Ramadan 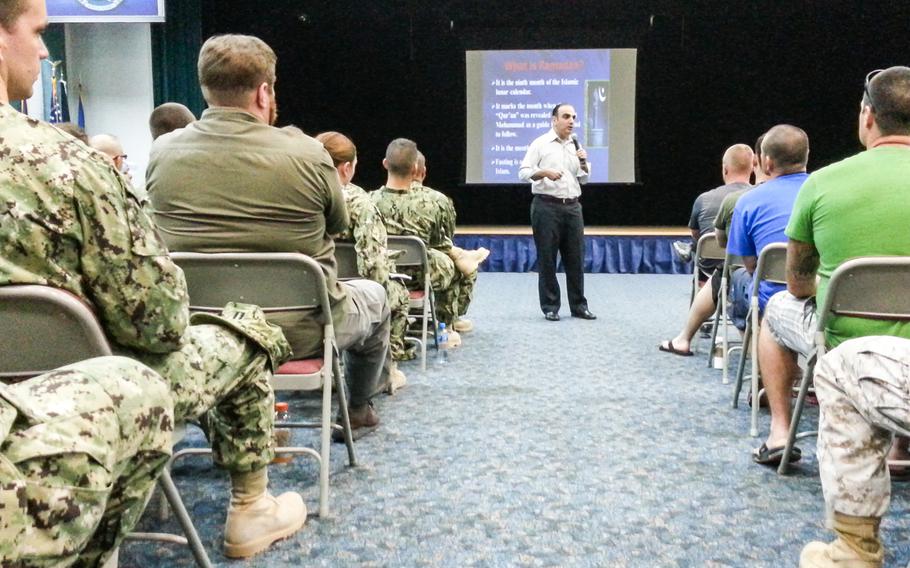 Ali Hassan, a cultural adviser at Naval Support Activity Bahrain, gives a presentation about Islam, the Islamic lunar calender, and about customs and traditions during Ramadan. About 150 personnel at the Bahrain base attended the briefing on Tuesday, June 24, 2014. (Hendrick Simoes/Stars and Stripes)

Ali Hassan, a cultural adviser at Naval Support Activity Bahrain, gives a presentation about Islam, the Islamic lunar calender, and about customs and traditions during Ramadan. About 150 personnel at the Bahrain base attended the briefing on Tuesday, June 24, 2014. (Hendrick Simoes/Stars and Stripes) 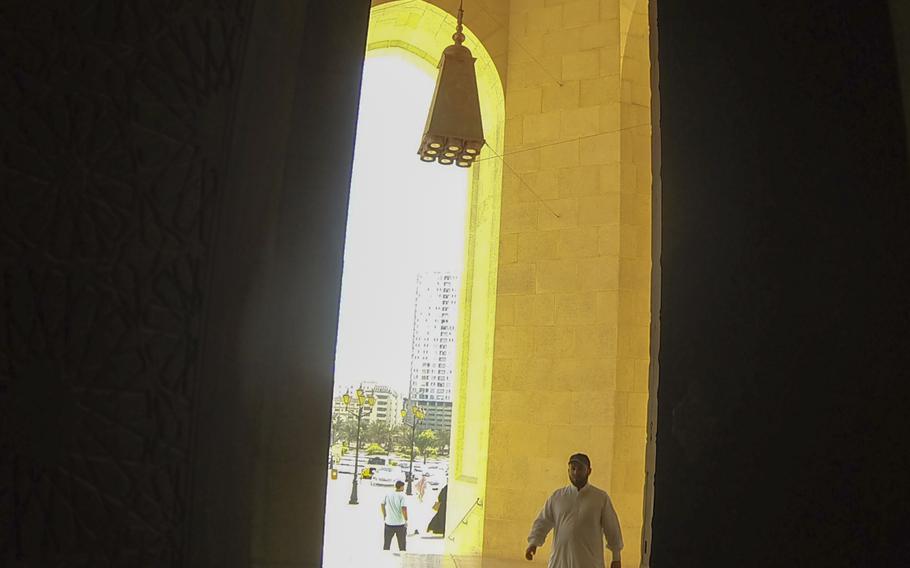 A man enters the Al Fateh Grand Mosque in Bahrain for afternoon prayer on Nov 20, 2013. (Hendrick Simoes/Stars and Stripes) 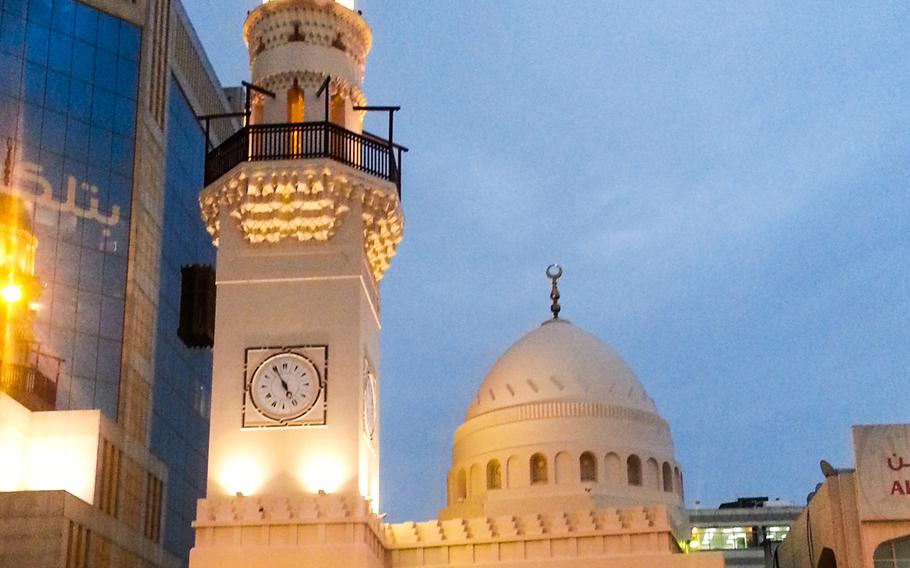 The Yateem Mosque in Central Manama, Bahrain, on Nov 20, 2013. (Hendrick Simoes/Stars and Stripes)

MANAMA, Bahrain — U.S. personnel accustomed to drinking their coffee on the drive to work will have to put that habit on hold for about a month. It’s one of a few lifestyle changes Americans will have to make during the holy month of Ramadan.

Ramadan is the ninth month of the Islamic calendar. Officials expect Ramadan to begin at sunrise on Saturday, depending on when the new moon is sighted. The holy month lasts for approximately 30 days — until about July 28. For Muslims around the world, Ramadan is a month of fasting and devotion to God. Most Muslims fast from dawn to sunset, when families gather for Iftar — the meal that breaks the fast.

For the 8,200 U.S. personnel living here, and those serving throughout the U.S. Central Command area of responsibility — including servicemembers, civilian personnel, contractors and family members — the month may require changing some daily routines.

Businesses and government offices will reduce hours and most restaurants will be closed during daylight hours.

While not required to fast during Ramadan, in Bahrain, Americans can be fined or detained by local authorities for eating, drinking or smoking in public when off-base during daylight hours.

Navy officials are requiring U.S. personnel to dress more conservatively off-base during Ramadan. Although not a requirement by Bahraini authorities, the Navy is demanding that men wear long-sleeved shirts and women wear sleeved blouses that cover their elbows. Also, men must wear long trousers, and women should wear pants or skirts that cover the knees.

Base cultural advisers have spent the last few weeks conducting Ramadan briefs to educate Americans about the holy month. Ali Hassan briefed about 150 personnel Tuesday about Islam, the lunar calendar and customs and traditions during Ramadan.

“It actually made me want to do a lot more research into the religion,” said Petty Officer 1st Class James Ramirez. He said the additional requirements during the month aren’t a big deal to him. “For such a small period of time, it’s a small sacrifice,” he said.

Other servicemembers echoed that sentiment.

Hassan encouraged personnel to experience Iftar in a Ramadan tent, many of which are set up at various locations around Bahrain during the holy month and welcome non-Muslims.

“Make it a point to visit these tents while you’re here. You don’t know if you’ll ever come back to Bahrain in the future,” Hassan said during the brief.

While the tents offer a more traditional atmosphere, many restaurants put aside their regular menus during the month and serve special Iftar dinners.

Things to Know During Ramadan

Eating, drinking, chewing and smoking in public are civil offenses in some Islamic countries. Men should wear long sleeves and pants. Women’s sleeves should extend below the elbow and pants or skirts should cover the knees. Avoid critical remarks about fasting or any religious practice. Most restaurants will be closed except those in 4- and 5-star hotels. Businesses alter and reduce hours during the day; some open at night until early morning hours. Arabs are good hosts and may offer you food or refreshments during daylight hours. Such offers should be declined. All consumption of alcohol by U.S. military personnel is prohibited at any off base public venue in the U.S. Navy 5th Fleet Area of Responsibility during Ramadan. It’s customary to say ‘Ramadan Kareem’ during Ramadan.Source: NSA Bahrain Public Affairs, and Ali Hassan, cultural adviser on NSA Bahrain