US patrols Strait of Hormuz after Iran seizes cargo ship 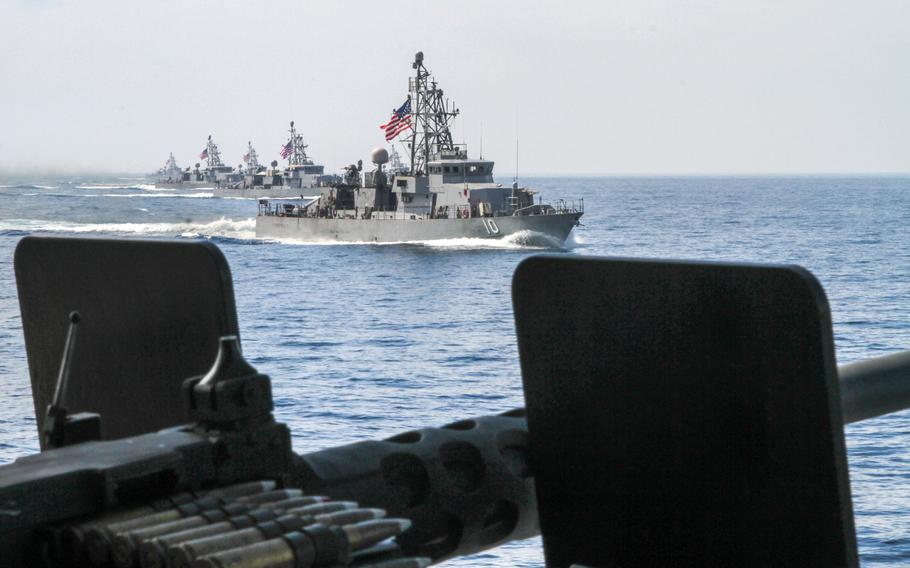 U.S. Navy coastal patrol ships travel alongside one another during a formation and maneuvers exercise in the Persian Gulf in 2014. Three of the vessels and the destroyer USS Farragut were patrolling the Strait of Hormuz on Wednesday, April 29, 2015, a day after Iranian patrol boats seized a container ship registered in the Marshall Islands. (Hendrick Simoes/Stars and Stripes)

MANAMA, Bahrain — U.S. warships and aircraft stepped up patrols Wednesday in the Strait of Hormuz after Iranian vessels seized a foreign cargo ship there in an unusual move that could raise tension between the U.S. and Iran as the two countries prepare for final talks on a nuclear deal opposed by powerful voices in the U.S. Congress.

The MV Maersk Tigris and its crew remained in Iranian custody on Wednesday, a day after the Marshall Islands-flagged vessel was boarded by Iran’s Revolutionary Guards. The U.S. Navy dispatched the destroyer USS Farragut to the area, joining three coastal patrol ships and a P-3 Orion surveillance aircraft.

“We sent ships into the area to help monitor the situation and help maintain a U.S. naval presence in the vicinity of Strait of Hormuz,” Cmdr. Kevin Stephens, a spokesman for the U.S. 5th Fleet, said Wednesday. Pentagon spokesman Col. Steve Warren said the ships would give the Navy options but declined to spell out what those might be.

Iran’s state-owned PressTV said the ship and its mostly European and Asian crew was seized because the vessel’s operator refused to pay an outstanding debt to a private Iranian company. The ship is owned by a Danish shipping conglomerate Maersk and leased to a German company.

In New York, Iranian Foreign Minister sought to downplay the incident, saying Iran was committed to freedom of movement within the Strait of Hormuz, through which about one-fifth of the world’s oil supply flows. Much of the strait is within Iranian territorial waters, but an international convention permits regular passage by merchant vessels and warships.

Despite the seizure, senior diplomats from Iran, the United States and four other major powers will resume talks Thursday on a final deal to curb Iran’s nuclear program in exchange for the lifting of crippling economic sanctions. A tentative framework agreement was reached in Switzerland on April 2 with a June 30 deadline for a final deal.

But the negotiations have drawn fire in Israel and within the U.S. Congress, where opponents have questioned whether the Obama Administration can trust the Iranians to abide by an agreement and whether the deal would do enough to ensure that Iran cannot build a nuclear weapon. Congressional skepticism has been fueled by Iran’s expanding presence in the Middle East, including its support for Shiite rebels in Yemen and Tehran’s role in the war against the Islamic State in Iraq and Syria.

With so many sensitive issues at stake, analysts were surprised that Iran would choose such an unusual step as seizing a commercial ship in the strait.

“What makes this incident stand out is it’s so rare,” said Richard Dalton, a former British ambassador to Iran and current fellow at the London think tank Chatham House. “The passage of thousands of vessels takes place in an orderly arrangement managed by Iran on one side and Oman on the other.”

Dalton said Wednesday’s incident could be a response to U.S. moves this month to dispatch the aircraft carrier USS Theodore Roosevelt and other ships to waters near Yemen after Iranian cargo ships believed to have been carrying weapons to pro-Iranian Shiite rebels sailed toward a Yemeni port. The U.S. has given support to a Saudi-led bombing campaign against the rebels, who are fighting forces loyal to the exiled, pro-American Yemeni president.

The Iranian convoy turned back even before U.S. warships reached the area, preventing a possible U.S.-Iran confrontation on the high seas.

“From the Iranian view that was a storm in a teacup that was designed to put Iran in its place and belittle it,” Dalton said. “So I suspect that the choice of this particular ship in Iranian waters in the Persian Gulf is to show that Iran can have teeth, too.”

Although an independent country, the Marshall Islands has an agreement with the United States that gives the U.S. responsibility for defending the small, Pacific island nation.

Ellie Geranmayeh, a policy fellow at the European Council on Foreign Relations, said that while there was still too little information to determine why the ship had been seized, Iran’s handling of the matter was odd.

“If it was purely a legal issue, I think the PR side of the event could’ve been dealt with much more diplomatically on the Iranian side,” Geranmayeh said in an email.

The Strait of Homuz, only 21 miles wide at its narrowest point, has long been a source of tension between Iran and the United States, which maintains substantial naval forces in the Persian Gulf to guarantee freedom of movement there.

After Iran threatened to block the waterway in 2012, the U.S. moved more minesweepers and patrol vessels to the region.

Iranian and U.S. naval ships routinely operate near the strait. Iran has two naval forces in the area — its conventional navy, which operates in open-sea operations, and the Revolutionary Guard navy, a smaller force of high-speed boats that operates mainly within the Gulf.

Military officials and analysts say the Revolutionary Guard is the more unpredictable and confrontational force. In an exercise in February, Revolutionary Guard forces used coastal and shipborne missiles to destroy a ship mocked-up as a U.S. aircraft carrier.