An MV-22 Osprey, assigned to Marine Medium Tiltrotor Squadron (VMM) 161, launches from the flight deck of the amphibious assault ship USS Peleliu while underway during Rim of the Pacific Exercise 2014. (Dustin Knight/U.S. Navy)

An MV-22 Osprey, assigned to Marine Medium Tiltrotor Squadron (VMM) 161, launches from the flight deck of the amphibious assault ship USS Peleliu while underway during Rim of the Pacific Exercise 2014. (Dustin Knight/U.S. Navy) 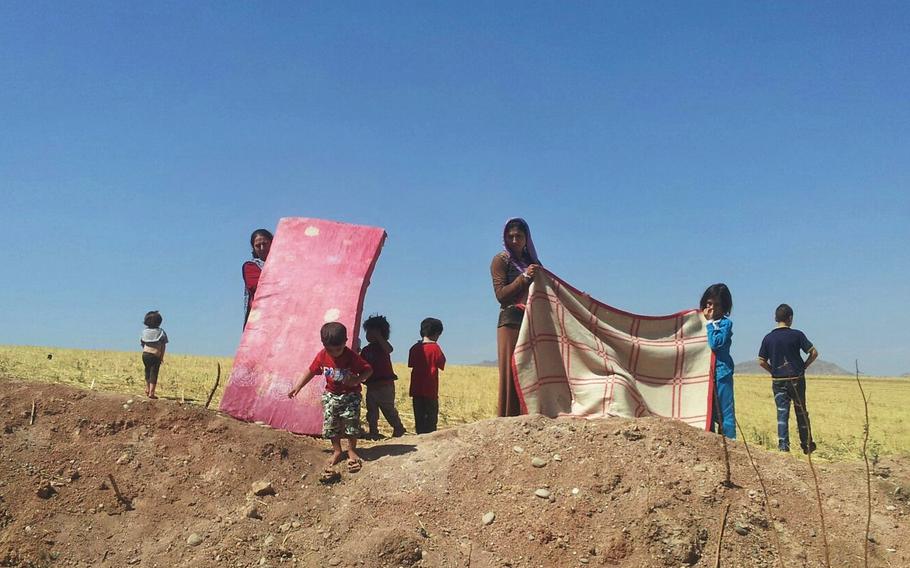 In this photo provided by Mikey Hassan, members of his extended family stop along the side of the road as they flee militants of the Islamic State group, who took over the city of Sinjar, Iraq. The family, who is Yazidi, fled the city into the Sinjar mountains and then managed to escape to the Kurdish province of Dohuk after two days by shooting their way past the militants. (Courtesy of Mikey Hassan)

WASHINGTON — The Pentagon has positioned MV-22 Osprey troop transports in northern Iraq amid speculation that American forces could be used to help evacuate people threatened by Islamic militants.

The Ospreys were used Tuesday to move 129 additional U.S. military personnel to the city of Irbil and they remain in the area, Pentagon spokesman Col. Steve Warren told reporters on Wednesday.

“They’ll stay there until they’re no longer required,” Warren said.

Warren did not say how many Ospreys are there, but a defense official told Stars and Stripes that it’s “a small number.”

The new troop contingent in northern Iraq, which includes Marines and Army Special Forces, has been told to “assess the scope of the humanitarian mission and develop additional humanitarian assistance options beyond the current airdrop effort in support of displaced Iraqi civilians trapped on Sinjar Mountain by the Islamic State of Iraq and the Levant,” according to a Defense Department statement.

“They will work closely with representatives from the U.S. Department of State and USAID to coordinate plans with international partners and nongovernment organizations committed to helping the Yazidi people,” DOD said.

The latest influx of troops brings the total number of U.S. servicemembers in northern Iraq to around 200.

On Tuesday, Secretary of Defense Chuck Hagel said they’re not there to conduct “a combat-boots-on-the-ground operation.”

However, President Barack Obama has suggested that the international community should try to set up a safe passage corridor to help the Yazidis escape from ISIL, a militant group which refers to itself as the Islamic State.

The IS has threatened to kill the Yazidis, members of a minority religious sect, if they don’t convert to Islam. Some have been able to escape from Mount Sinjar in recent days as U.S. airstrikes have targeted the militants, but thousands more may still be trapped there.

The Osprey would be ideal for such a mission. The aircraft can take off and land vertically like a helicopter but fly fast like plane. It has been used extensively to insert special operations forces into hostile areas and also to conduct rescue operations.

According to Warren, the Islamic State does not possess anti-aircraft weapons that could shoot down high-flying jets, but they do have the ability to hit rotary-wing aircraft like the Osprey.

Warren declined to say whether the Obama administration is thinking about green-lighting such an operation.

“I’m not going to talk specifically about what we’re planning for the future, or what’s under consideration,” he said in response to a reporter’s question.

Warren would not provide information about where the Ospreys had been stationed before they were sent to northern Iraq, other than to say that they came from the U.S. Central Command area of operations. The Pentagon had earlier announced that the USS Bataan amphibious transport, now in the Persian Gulf, was carrying MV-22s and a large number of Marines.

In addition to the Ospreys, there are helicopters near Irbil as well, according to Warren. Warren did not provide information about the types or numbers of those assets.

Warren said the U.S. is using a secure airfield near Irbil that is being guarded by Kurdish forces.

The timing of a rescue, if it were to occur, is unclear. Defense officials have suggested that more information is needed before such an effort could take place.

“We’ll have to wait and see and get a better sense on the ground before we can offer some options to the president,” Lt. Gen. William Mayville Jr., director of operations for the Joint Staff, told reporters Monday.

Warren said there is no time line for the special operators to complete their assessments of the humanitarian situation and potential options to deal with it, but “time is of the essence.”

In the meantime, U.S. military planes continue to drop relief supplies to the Yazidis and bomb Islamic State forces.

“Our aircraft remain positioned to strike any terrorist forces around the mountain who threaten the safety of these families,” Obama said Monday at Martha’s Vineyard, Mass., where he and his family are vacationing this week.