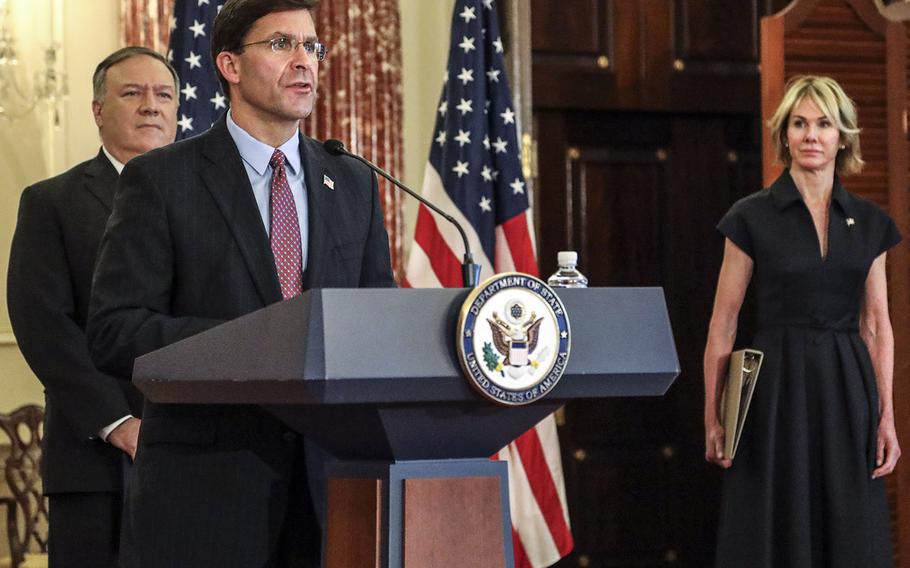 Buy Photo
Defense Secretary Mark Esper speaks Monday during a news briefing at the State Department on new Iranian sanctions. Behind him are Secretary of State Mike Pompeo and Ambassador to the United Nations Kelly Craft. (Caitlin Kenney/Stars and Stripes)

WASHINGTON— U.S. officials on Monday announced a series of sanctions against Iran, including its missile programs, in an attempt to force the nation to renegotiate a new deal that would ban it from attaining nuclear weapons.

“Our actions today are a warning that should be heard worldwide. No matter who you are, if you violate the U.N. arms embargo on Iran, you risk sanctions,” Secretary of State Mike Pompeo said during a news conference at the State Department.

Sanctions also will be imposed against other people and organizations providing Iran financial and logistical support that allows the country to purchase and export weapons, said the senior U.S. officials, including Defense Secretary Mark Esper.

The announcement comes days after U.N. sanctions on Iran were put back in place for violating terms of the 2015 nuclear deal.

President Donald Trump also signed an executive order Monday to enforce the U.N. arms embargo and hold those who go against the sanctions accountable, Pompeo said. The transfer of arms and military equipment to and from Iran is “a continuing threat to regional and international security,” the order states.

U.S. troops stationed in the region are ready to respond to Iranian aggression, Esper said, and the Defense Department is doing what is necessary to protect forces in the region without going into specifics. Esper said he has spoken with Gen. Mark Milley, the chairman of the Joint Chiefs of Staff, within the past 24 hours, and Milley has also spoken to commanders in the region.

There have been attacks on US troops in the region by Iran this year, including the ballistic missile attack in January on American service members in Iraq that injured more than 100.

“We feel very confident with regard to our readiness and preparedness to deal with anything that might happen in the region. Again, the important thing is that Iran complies with international rules and norms and expectations we have set forth for them and become a normal country,” Esper said.

The additional sanctions have been imposed on the Iranian ministry of defense and armed forces logistics, as well as the disputed president of Venezuela, Nicolás Maduro, for working with Iranian officials for two years to flout the U.N. arms embargo, Pompeo said.

The United States will keep the sanctions until Iran agrees to a “real deal,” he said

The 2015 Joint Comprehensive Plan of Action, otherwise known as the Iran Deal, was an agreement between the United States, Iran and several European countries to lift economic sanctions on Iran if it stopped much of its nuclear program and allowed inspectors into the country, according to the Council on Foreign Relations, a think tank.

In May 2018, Trump withdrew from the deal and re-imposed U.S. nuclear sanctions, saying at the time that the deal was poorly negotiated and could not meet the steps necessary to halt the nuclear program. Iran then began to slowly exceed the limits agreed to for enriched uranium and heavy water, The Washington Post reported, and last month, the United States notified the U.N. Security Council that Iran was in violation of the agreement, starting the 30-day process to “snapback” the previous U.N. sanctions, though the U.S. was no longer part of the deal.

The rollback of U.N. sanctions on Iran happened Saturday night, according to a State Department statement. It also said “a range of additional measures” would be established to strengthen the implementation of the sanctions and “hold violators accountable.”

O’Brien said that instead of keeping sanctions on Iran to get a better deal, the U.S. in 2015 took the pressure of the country, allowing Iran to receive more funds, which were used for “terrorist proxy wars throughout the Middle East.”

The previous re-imposed sanctions have “squeezed” Iran’s funding and the ones announced Monday will further curtail the country’s funding, O’Brien said.

“What we want is a great deal with Iran. And what the president has said is if Iran is willing to foreswear regional terrorism and proxy wars, and is willing to end its pursuit of a nuclear bomb, Iran can be a tremendously prosperous state,” O’Brien said.

“This administration will use every tool at our disposal to stop Iran's nuclear ballistic missile and conventional weapons pursuits, which it uses directly to threaten, and terrorize the rest of the world,” Mnuchin said.