US forces leave Kandahar Airfield as drawdown continues in Afghanistan 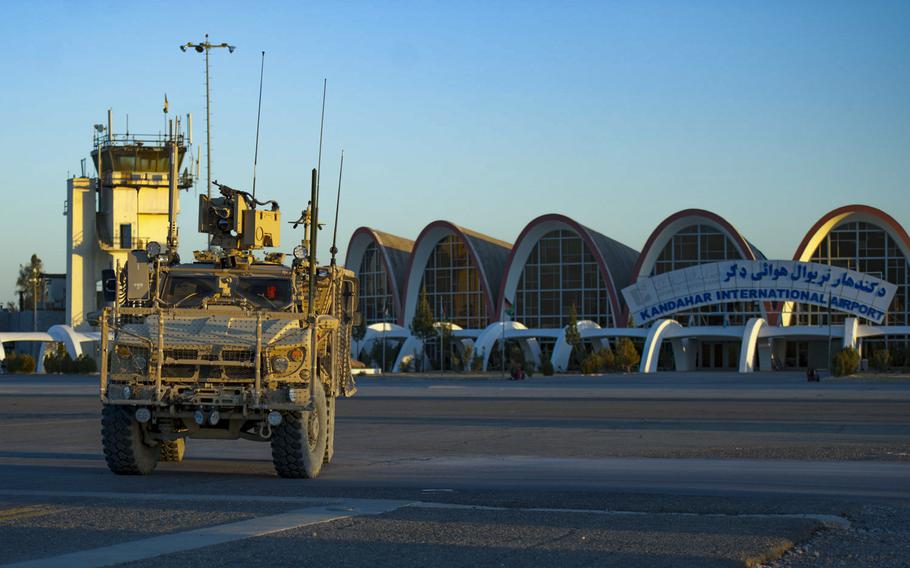 KABUL, Afghanistan — U.S. forces have left Kandahar Airfield, a southern Afghanistan base that was once one of the largest NATO and coalition installations in the country, Afghan and U.S. officials said.

The airfield has been transferred to the Afghan security forces, a U.S. defense official said on condition of anonymity because they were not authorized to speak on the matter.

Coalition personnel may remain in Kandahar for "a day or two" to address security concerns, said the official, who declined to say exactly when the base was handed over.

The Afghan Defense Ministry said earlier this week that the handover wouldn’t occur until sometime after the Eid al-Fitr holiday, which ends Saturday.

“The handover of Kandahar Airfield was coordinated, both with senior leaders in (the Afghan government) and with our Afghan partners in the 205th Corps,” said Sonny Leggett, a spokesman for the American-led and NATO coalition in Afghanistan, on Thursday.

U.S. forces did not hold a handover ceremony at the base, which housed an estimated 30,000 troops and contractors at the height of the war.

A spokesman for Afghanistan’s 205th Atal Military Corps said the departure of U.S. forces from the base came as a surprise and without coordination. The move left Afghan officials uncertain whether the U.S. left Tuesday night or Wednesday morning.

“The Americans have vacated their bases and they have left,” Alvi said.

An Afghan security official at the Kandahar airport confirmed that U.S. troops left this week without a ceremony.

“They left in the night” and there are no more U.S. forces in Kandahar, “not at this moment,” said Gen. Faqir Qowahi, commander of the military side of the Kandahar Airport.

Security has diminished in the province around the base since last year’s U.S.-Taliban deal and subsequent drawdown of troops. Fighting over the winter led to attacks on the city’s outskirts and militants fired on Kandahar Airfield this spring, in an attack that U.S. forces said caused no injuries or damage to equipment.

Stars and Stripes reporters Zubair Babakarkhail and Caitlin Doornbos contributed to this report.