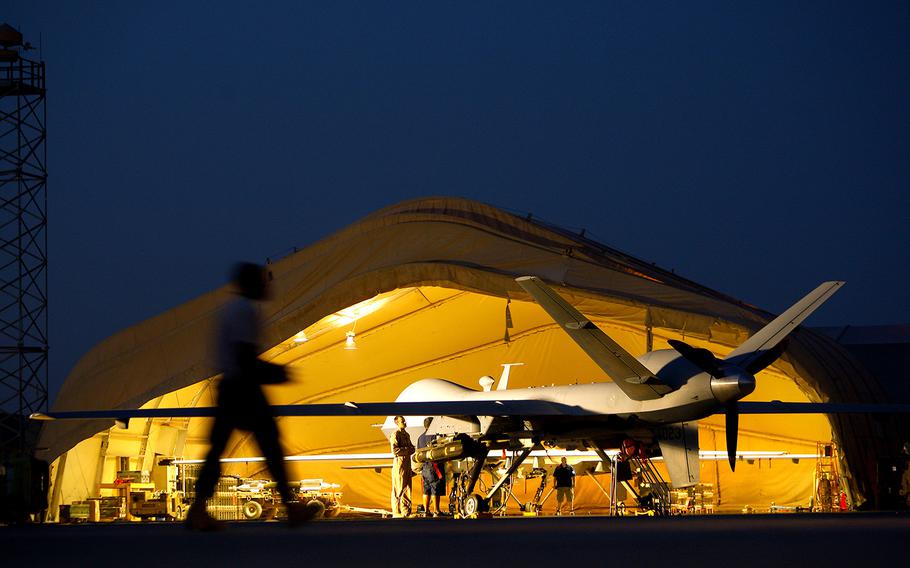 A Reaper drone prepares for a mission in the skies over Afghanistan. (Rick Loomis/Los Angeles Times/MCT)

KABUL, Afghanistan — Senior leaders of Islamic State’s Afghan faction were killed in a U.S. drone strike in the eastern part of the country this week, Afghan officials said Thursday.

Shahidullah Shahid, a senior commander, along with Gul Zaman, the second-in-command for Islamic State in the Khorasan, were traveling Tuesday in Nangarhar province’s Achin district — about 120 miles east of Kabul — when their convoy was hit, provincial police spokesman Hazrat Hussain Mashraqiwal said.

Shahid quickly became the main spokesman for Islamic State in Afghanistan after becoming one of the first Taliban leaders to pledge loyalty to the Iraq- and Syria-based terror group. He had been a member of the Pakistani Taliban, but was expelled from the group last fall after pledging allegiance to Islamic State.

The American drone strike was one of two carried out earlier this week in Achin and neighboring Mena districts specifically targeting Islamic State members, he said.

NATO spokesman Col. Brian Tribus said U.S. forces participated in a “precision strike” on Tuesday in Achin, but would not confirm whether an American drone carried out the attack that killed Shahin and Zaman.

The Taliban have warned Islamic State to stay out of Afghanistan. In a letter to Islamic State chieftain Abu Bakr al-Baghdadi posted on their website last month, the Taliban threatened to react harshly if anyone tried to undermine their achievements during the 14-year war here.