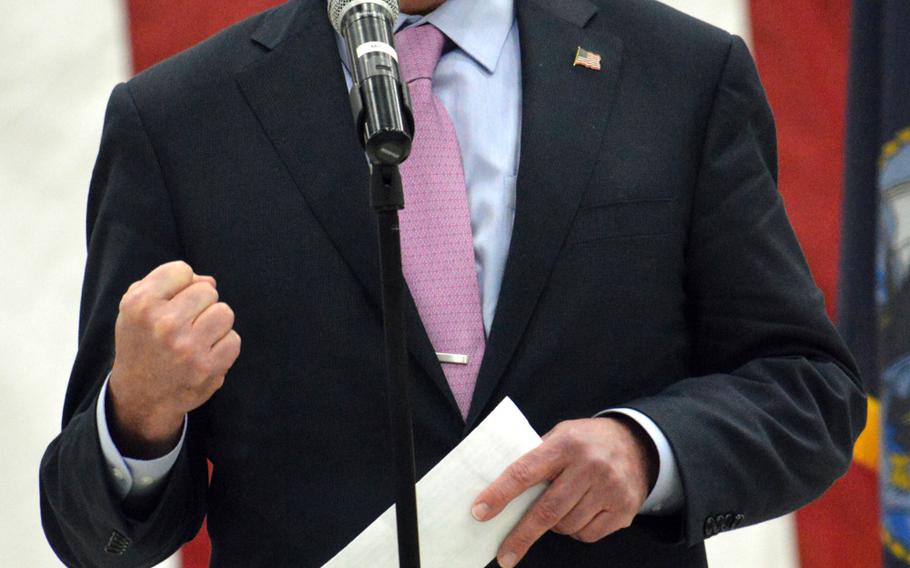 President Barack Obama ordered the mission into the eastern Syrian city of al-Amr, where the target was a senior leader known as Abu Sayyaf and his wife Umm Sayyaf.

“Abu Sayyaf was killed during the course of the operation when he engaged U.S. forces,” Defense Secretary Ashton Carter said in a statement Saturday. Sayyaf was involved in the Islamic State group's military operations and helped direct the terrorist organization's illicit oil, gas, and financial operations as well, Carter said.

Army Delta Force troops traveling in from Iraq aboard V-22 Osprey and Black Hawk helicopters, engaged in a “fairly intense” firefight that included hand-to-hand combat, a defense official told The Associated Press. About a dozen militants were killed in the raid. No civilians were killed, though women and children were present during the fight, the AP reported.

Sayyaf’s wife, who was taken into custody, also was believed to be an active member of the Islamic State, also known as ISIS or ISIL, and played an important role in the group's terrorist activities, Carter said. She also may have been complicit in the apparent enslavement of a young Yezidi who was rescued by U.S. forces during the raid.

No U.S. forces were killed or injured during the operation, Carter stated.

“The operation represents another significant blow to ISIL, and it is a reminder that the United States will never waver in denying safe haven to terrorists who threaten our citizens, and those of our friends and allies,” Carter stated.

Obama’s decision to launch the strike came with a unanimous recommendation of his national security team. It remains unclear who will take custody of Sayyaf’s wife.

“We are working to determine an ultimate disposition for the detainee that best supports the national security of the United States and of our allies and partners, consistent with domestic and international law,” National Security Council spokeswoman Bernadette Meehan stated in a release.

As for the rescued Yezidi woman, “We intend to reunite her with her family as soon as feasible,” Meehan said.

Friday’s ground operation marks a shift in U.S. efforts to take out senior Islamic State leaders. So far, those efforts have centered on air strikes, which U.S. officials say have taken a heavy toll on the group’s leadership.

Earlier this year, U.S. Secretary of State John Kerry declared that the United States had taken out as many as half of the Islamic State's leaders. The group’s leader, Abu Bakr al-Baghdadi, was believed to have been critically injured during one of those strikes. Rumors began to swirl that Baghdadi was either dead or incapacitated, but this week an audio recorded message emerged, seeming to indicate that he is still could be in leadership.

On Wednesday, Iraqi officials claimed that another top leader, al Baghdadi’s deputy Abu al-Afri, was killed during an airstrike in Tal Afar, Iraq, though the U.S. has yet to confirm if that is true.

Still, the militant group has proven resilient. For the U.S., raids into Syria are both rare and risky. Last year, U.S. special operators attempted at least one rescue inside Syria as part of an effort to save a group of Western hostages, including American journalist James Foley, who was killed by the Islamic State in August 2014.

Friday’s operation comes at a time when the Islamic State group continues to achieve battlefield gains inside neighboring Iraq, despite a U.S.-led airstrike campaign in support of Iraqi ground forces.

In recent days, Iraqi officials reported that Islamic State fighters have taken over the main government compound in Ramadi, the capital of Anbar province. Militants also control part of the Beiji oil field and surrounding areas, key not only for its oil but also for a road that leads to Mosul, a city of 2 million people that the Islamic State still controls.

Nonetheless, U.S. officials argue that operations against the militants are taking a toll on the group’s fighting capabilities.

“The coalition continues to strike Daesh terrorist targets in and around Ramadi, Iraq” Brig. Gen. Thomas Weidley, CJTF-OIR chief of staff, said in a statement Saturday, using an Arabic acronym for the group. “Our ISF (Iraqi security forces) partners are fighting to retain this terrain, and we are resolved to support them with intelligence, planning assistance and airstrikes in this important effort.”