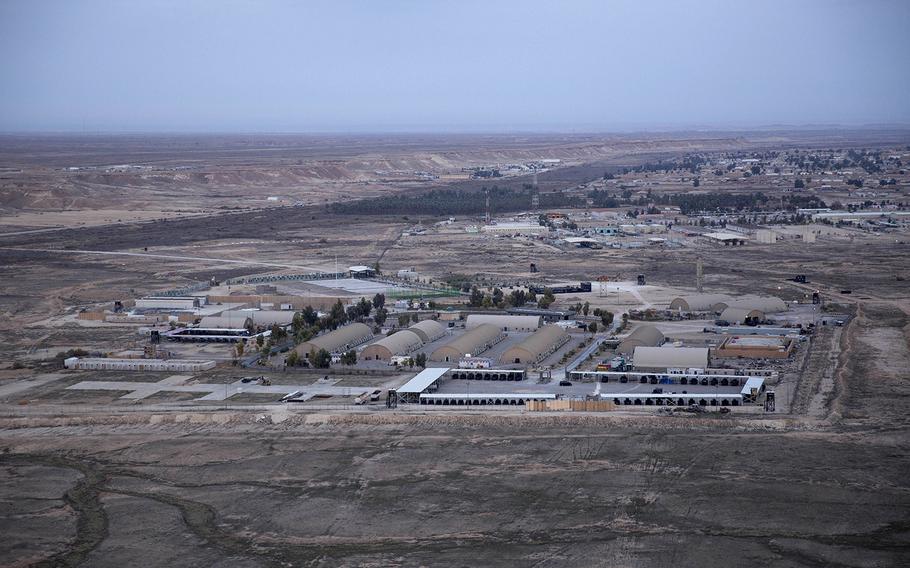 An American contractor died Wednesday after a barrage of at least 10 rockets rained down on an air base housing U.S. and coalition forces in western Iraq, the Pentagon said.

The contractor “suffered a cardiac episode while sheltering and sadly passed away shortly after” the attack, Defense Department spokesman John Kirby said in a statement. There were no immediate reports of injuries to U.S. service members, he said.

Iraqi security forces and coalition officials were on the scene investigating, a military official told Stars and Stripes. The launch pad used to fire the missiles was found about 5 miles from the base, The Associated Press reported, citing an unnamed official.

Images shared on social media showed a burned-out truck with a raised flatbed that had concealed rocket tubes. It’s typical of launchers used in previous attacks, which are often triggered by electrical timers.

No one has claimed responsibility for the attack, “and we do not have a complete picture of the extent of the damage,” Kirby said, adding that counter-rocket air defense systems “engaged in defense of our forces.”

The attack occurred at the same base where Iran a year ago launched a missile attack that military officials said left more than 110 personnel with traumatic brain injuries, and drew Washington and Tehran closer to a larger conflict at the time.

The latest attack also came two days before Pope Francis was scheduled to visit Iraq in a trip that will include Baghdad, southern Iraq and the northern city of Irbil.

It follows a U.S. airstrike on a compound in Syria last week, which President Joe Biden ordered in response to a series of rocket attacks on American and coalition troops in Iraq that Washington has blamed on Shiite militias.

Two F-15E Strike Eagle jets destroyed several buildings at a complex along the Iraq-Syria border that the U.S. believes Iran-backed paramilitary groups were using for operations in the region. At least one militia member was killed in the strike and two others were injured, Kirby told reporters Monday.

It was conducted the week after rockets fell on an airfield in the Kurdish region’s capital of Irbil that killed a contractor from the Philippines and wounded several others, including a U.S. service member and four American contractors.

The airstrike was a “proportionate military response,” the Pentagon spokesman said last week. It was meant to send a clear message that Biden would act to defend U.S. and allied troops, he said.

Rocket attacks on U.S. military and diplomatic facilities in Iraq and Afghanistan have been common over the past two decades. In Iraq, they have been used by Iranian proxies to try to press Washington to withdraw its forces from the country, where they are helping battle the Islamic State group. The U.S. decreased its troop presence in Iraq from about 5,000 last year to 2,500 by mid-January.

Militant groups have also vowed revenge for the U.S. drone strike at Baghdad airport in January 2020 that killed Maj. Gen. Qassem Soleimani, the head of Iran’s elite Quds Force and the founder of an Iraqi militia.

After a lull, the frequency of attacks in Iraq picked up when the Trump administration imposed sanctions to pressure Tehran into renegotiating an Obama-era nuclear agreement that the U.S. withdrew from nearly three years ago.

A deadly rocket attack on a base housing U.S. troops in late December 2019 kicked off a series of escalations that culminated with Trump ordering the drone strike that killed Soleimani. Tehran launched over a dozen ballistic missiles in retaliation on Jan. 8, 2020, mostly targeting al Asad.

The Biden administration has sought to return to the nuclear deal and had agreed to an informal meeting with Iranian officials, proposed by the European signatories to the agreement. Tehran rejected the offer Sunday, after last week’s airstrike.