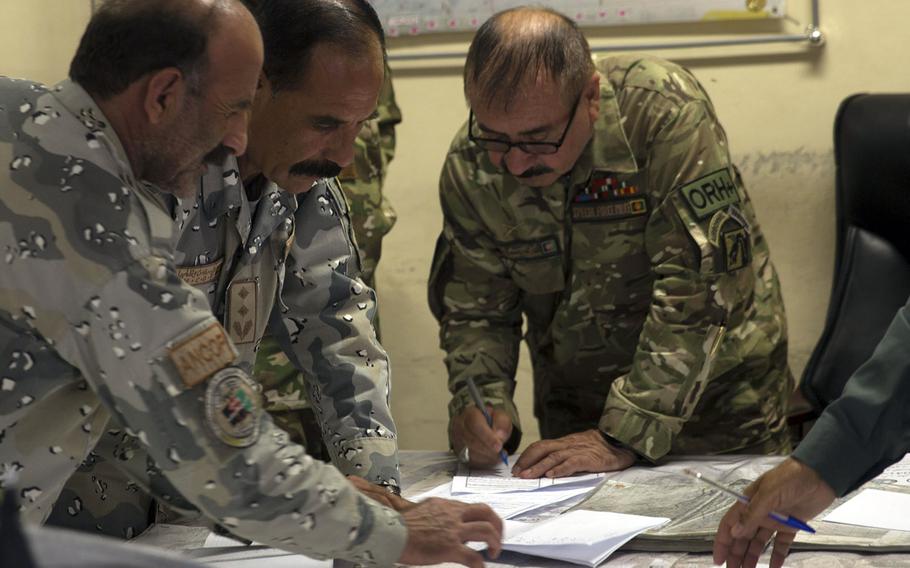 WASHINGTON – Afghan security forces backed by U.S. air power and Marine Corps advisers retook a key district from the Taliban in Afghanistan's restive Helmand province on Monday after a battle to push the insurgents away from the province’s capital, U.S. and Afghan officials said.

Afghan government forces raised the national flag over the central building complex in Nawa district on Monday following a two-day offensive to reclaim the district just south of Lashkar Gah, the Helmand capital, said Navy Capt. Jeff Davis, a Pentagon spokesman. He said the district, among the larger towns in central Helmand, was critical to securing Lashkar Gah, a prized target for the Taliban.

The Taliban had held Nawa for about nine months, according to Long Wars Journal, which monitors the Global War on Terror. Because of its location along a major north-south thoroughfare into Lashkar Gah, the Taliban used Nawa to stage regular attacks on the city.

Davis said the Afghan forces will now establish security checkpoints throughout the district in an attempt to keep the Taliban away from Lashkar Gah.

Some of the most brutal fighting of the nearly 16-year war in Afghanistan has happened in Helmand province. In recent years, the Taliban has been resurgent throughout the rural regions of the province, which it values largely for its vast opium production, the group’s primary source of money. The Islamist group controls six of Helmand’s 14 districts and has at least a small presence in six others, according to Long Wars Journal.

Hundreds of American troops have died fighting in Helmand since the post 9/11 invasion in late 2001. An American soldier, Pfc. Hansen B. Kirkpatrick, was killed earlier this month in an indirect fire attack while advising Afghan forces in an operation in Nawa.

The successful mission shows the improvement of the Afghan forces, according to the Marine officials advising them. For years, government forces in Helmand have struggled to secure the province amid numerous cases of corrupt leadership and high rates of desertion, according to U.S. officials, including Army Gen. John Nicholson, the top American commander in Afghanistan.

About 300 Marines were deployed to Helmand in April to train, assist and advise struggling security forces in the province, an area where as many as 20,000 Marines operated before the United States declared its combat mission completed in 2014.

Marine Col. Matthew Reid, the deputy commander of Task Force Southwest, the Marine advisers in Helmand, said Monday that the Afghan Border Patrol officers and National Police forces who carried out the operation showed “significant gains in leadership and maneuver.”

The operation is planned to continue pushing south to move the Taliban farther from Lashkar Gah, Afghan officials said.

The Afghans credited the U.S. air support with boosting their morale as they fought for the district.

“It’s something that they never had in the past fighting with the enemies," Afghan police Lt. Col. Mohammad Omar said in a statement.

Nonetheless, about 50 Afghan troops were killed in the two-day battle, according to Afghan officials. It was not clear Monday how many Taliban were killed.

There were no reports of U.S. casualties in Helmand operations this week.

The operation came as the United States continues to weigh sending as many as 5,000 more troops to Afghanistan. There are about 8,400 American troops now serving there. Defense Secretary Jim Mattis told reporters at the Pentagon on Friday that the final version of its new Afghan plan was still being worked out, but he said he expected to announce it this month.