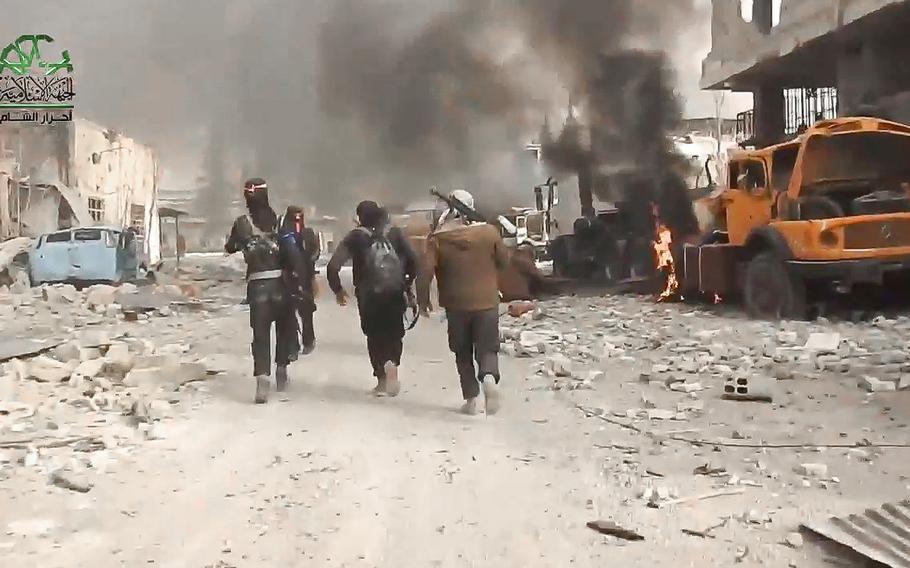 A screen grab from a video posted on Tuesday March 21, 2017, shows fighters from the Ahrar al-Sham militant group running past a buring truck during a battle against the Syrian government forces, in an eastern neighborhood of Damascus, Syria. (Ahrar al-Sham, Syrian militant group/AP)

A screen grab from a video posted on Tuesday March 21, 2017, shows fighters from the Ahrar al-Sham militant group running past a buring truck during a battle against the Syrian government forces, in an eastern neighborhood of Damascus, Syria. (Ahrar al-Sham, Syrian militant group/AP) 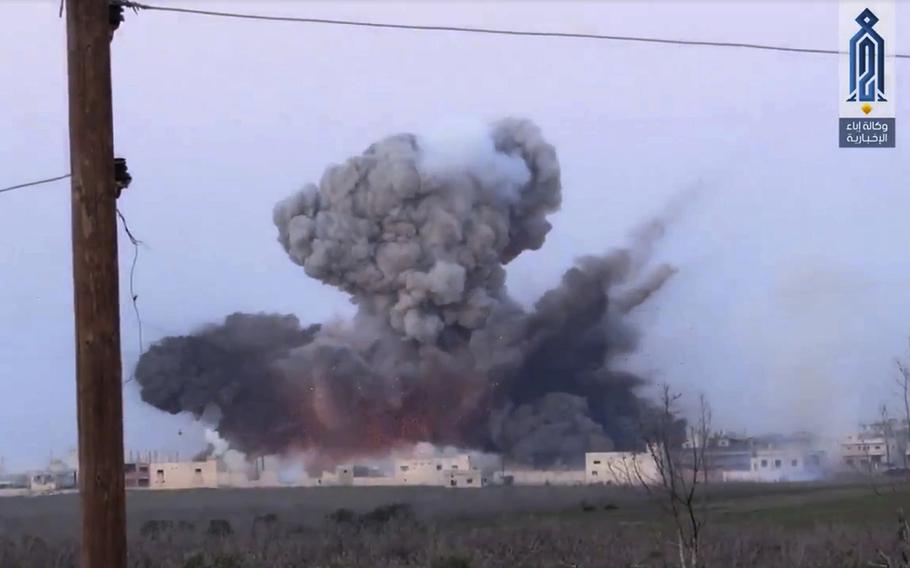 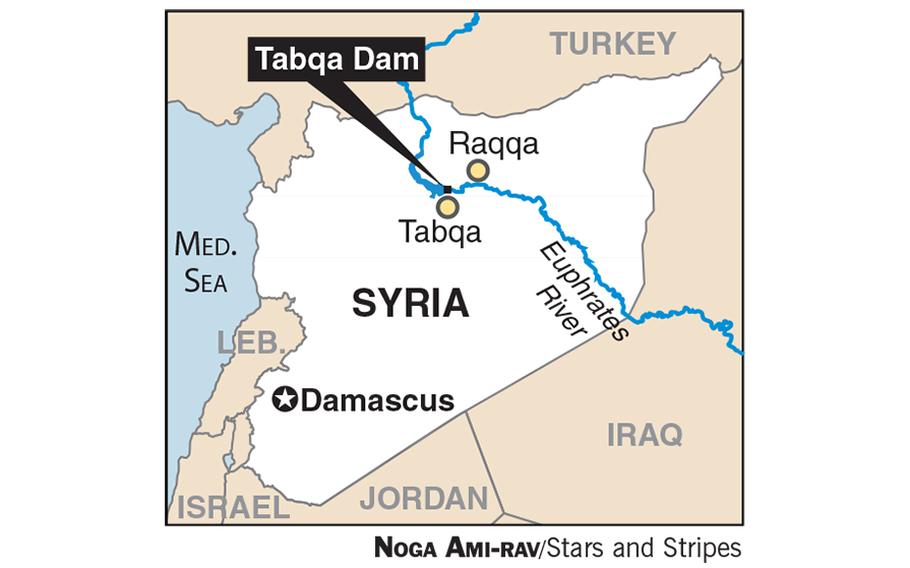 WASHINGTON – The U.S. military airlifted hundreds of Syrian fighters into a key area west of Raqqa held by Islamic State group to launch an assault on a strategically vital town and nearby dam, the Pentagon said Wednesday.

The Syrian Arab Coalition fighters aim to seize the town of Tabqa and its dam on the Euphrates River, which would cut the final supply and communications lines that the Islamic State group has from the western region of the country into its de facto capital of Raqqa, said Eric Pahon, a Pentagon spokesman. Tabqa is about 25 miles west of Raqqa along the Euphrates River.

A spokesman for the Operation Inherent Resolve coalition said the overnight troop insertion Wednesday caught Islamic State fighters in the area off guard and the U.S.-backed rebels had already captured several villages in the countryside near Tabqa. The operation to liberate the city, the dam and a military airfield nearby is expected to last several weeks, said Army Col. Joseph E. Scrocca, a Kuwait-based coalition spokesman.

“The fight is raging on and … we are pretty confident the [Syrian Arab Coalition] is going to get this accomplished,” he said.

U.S. special operation advisers accompanied the militia fighters on the aircraft as they were inserted behind enemy lines, but Scrocca would not say whether any American personnel are operating on the ground in the area. The Syrian Democratic Forces announced on social media that Marines were participating in the assault.

“The role of coalition force has not changed,” Scrocca said, adding they are operating “off the front lines” of the battle.

“They are there to support and advise local forces,” he said. “They are not engaged in direct combat.”

The latest operation is a continuation of shaping the battlefield in preparation of the assault on Raqqa. It is unclear when that assault will begin or precisely what forces will attack the city. The Operation Inherent Resolve coalition has long backed the Syrian Democratic Forces, which consists of the Syrian Arab Coalition and the Syrian Kurdish YPG militia. But Turkey, a NATO ally, has objected to the inclusion of YPG forces in the operation and wants its own forces and Syrian rebel groups that it supports to participate in the offensive.

Pentagon officials have said those negotiations are ongoing.

The insertion of Syrian Arab Coalition troops into Tabqa is the first air assault that the United States has conducted with partner forces in Syria, Scrocca said. Syrian Democratic Forces leadership planned the operation with help from American advisers.

The assault represents an uptick in the operations around Raqqa. The U.S.-backed forces have seized some 1,500 square miles of territory around the Islamic State group capital since November without prolonged heavy fighting. But the terrorists are likely to staunchly defend the area around Tabqa to retain access to the outside world.

“This is a huge, high-priority operation that is essentially going to cut off the terrorists,” Pahon said. The Islamic State group’s “caliphate is crumbling at this point.”

Since November, the coalition has conducted about 300 airstrikes around Tabqa, which have killed some 1,000 Islamic State fighters and destroyed more than 50 tactical vehicles, Pahon said.

Pahon said the coalition is paying careful attention to its airstrikes to maintain the structural integrity of Tabqa dam. The hydropower dam is the largest in Syria and provides electricity for much of the country.

The area around the dam has been controlled by the Islamic State group since 2013. The militants have long hosted foreign fighter training camps there. It also contains two prisons for high-value captives and recently has been a location where the group has planned terrorist attacks on the west, Pahon said.

The Islamic State group likely has about 4,000 fighters in and around Raqqa, a U.S. defense official told reporters recently. But the coalition in recent months has observed the group’s senior leadership fleeing the area for “safer zones” further south along the Euphrates River, the official said, speaking on the condition of anonymity.

While the fall of Raqqa – like the fall of Mosul in Iraq – would be a major victory over the Islamic State group, the official said it is not expected to be the final fight against the group, which does control additional territory along the Euphrates in eastern Syria and into Iraq.