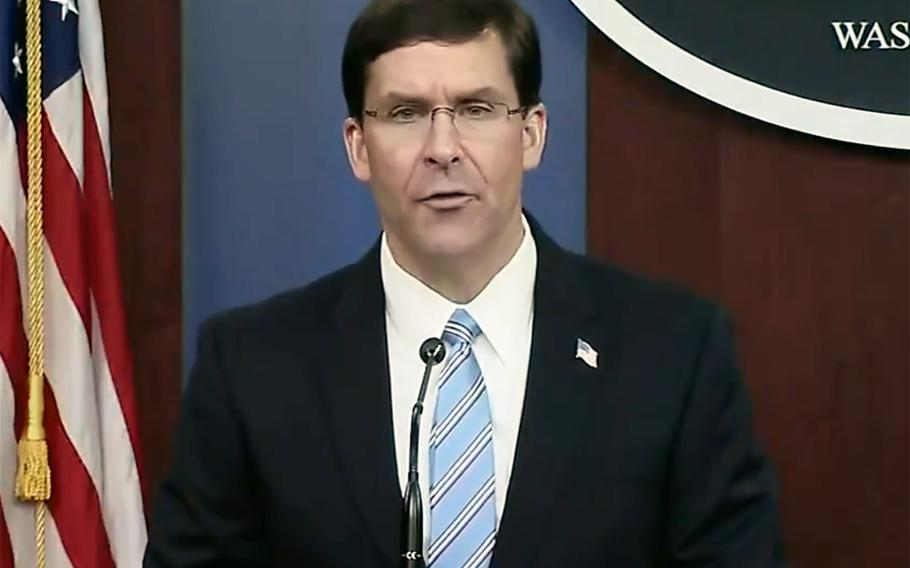 In a screen capture from a Department of Defense video, Defense Secretary Mark Esper speaks at the Pentagon on October 28, 2019. (DOD)

The adult males were transported to a “secure location” after their capture, said Army Gen. Mark Milley, the chairman of the Joint Chiefs of Staff. The fighters and other information collected Saturday during the Delta Force raid on the compound could provide the United States invaluable insight into future ISIS plans. News reports, including from the Washington Post citing unnamed U.S. officials, indicated former ISIS members provided information about al-Baghdadi’s location since ISIS lost the last bits of territory that the group controlled in eastern Syria.

Defense Secretary Mark Esper said al-Baghdadi’s death would not mean an end to ISIS, an organization still intent on reconstituting its so-called caliphate, which at its height in 2014 stretched across eastern Syria and northern Iraq in an area about the size of the United Kingdom. But the operation presented a warning to terrorists who continued to threaten the United States, he said.

“Al-Baghdadi’s death will not rid the world of terrorism or end the ongoing conflict in Syria, but it will certainly send a message to those who would question America’s resolve and provide a warning to terrorists who think they can hide,” said Esper, who briefed reporters alongside Milley at the Pentagon, a day after President Donald Trump announced al-Baghdadi was killed. “The United States, more than any other nation in the world, possesses the power and the will to hunt to the ends of the earth, those who wish to bring harm upon the American people.”

Esper credited Trump with ordering the operation some seven months after the United States announced the Syrian Democratic Forces had liberated the last of ISIS-controlled territory in Syria. The raid sent a roughly 100-soldier Delta unit on eight helicopters through hostile territory into the facility about 4 miles south of Turkey’s border in the Idlib province in Syria. The area is hundreds of miles from the lands that al-Baghdadi once controlled and has been largely dominated in recent years by anti-Syrian regime forces, including al-Qaida aligned groups, which opposed ISIS.

Trump on Sunday said al-Baghdadi had attempted to flee the compound after the U.S. commandos attack, and he was chased into a dead-end tunnel by a military dog before setting off an explosive vest, killing himself, three children and wounding the canine. Milley and Esper confirmed many of those details on Monday, but they declined to characterize al-Baghdadi as “screaming, crying and whimpering” like “a coward” in his final moments, as Trump said repeatedly during a Sunday news conference to announce the terrorist leader’s death.

They also declined to provide the name of military dog that chased down al-Baghdadi, because the canine remained in the Middle East on duty attached to a classified unit. When asked for its name, Milley said he would not release it "to protect [the dog's] identity." Later Monday, Trump tweeted a photograph of the canine, a Belgian Malinois, but he did not reveal its name.

Milley and Esper were photographed alongside Trump and other top administration and military officials watching the raid from the White House Situation Room. Milley said Trump might have learned such details by talking with service members present on the raid, but the general said he had not yet talked to those troops.

Al-Baghdadi’s remains were removed from the compound after his death and were transported to a secure location where his identity was verified through DNA forensics, Milley said. His body was then disposed of “appropriately,” the general said, declining to confirm al-Baghdadi was buried at sea as U.S. special operations forces had done after killing a previous most-wanted terrorist, al-Qaida leader Osama bin Laden.

Milley did confirm the Pentagon on Monday was reviewing video and photographic evidence captured during the raid and could release imagery in the coming days. Trump, too, hinted Monday that he hoped to release some video from the mission.

Even after al-Baghdadi’s demise, American forces, which Trump ordered in recent weeks to withdraw from Syria, will remain in the country, including some of them aimed at ensuring ISIS cannot return to power. The United States will not return forces to areas of northeastern Syria along Turkey’s border where it evacuated special operators ahead of a Turkish invasion aimed at Kurdish troops who led the anti-ISIS fight. But Esper said some troops, including ones who operate from armored vehicles, had moved into areas farther south to protect U.S.-held oil fields, which ISIS once used to finance its worldwide terrorist operations.

That move is designed to deny ISIS access to those oil fields, but it also blocks Russian or Syrian regime forces from gaining control of them, Esper said, adding more U.S. forces could be moved into that area around Deir al-Zour.

Esper said those oil fields could be used by the Syrian Democratic Forces to help finance their operations, including maintaining prisons holding thousands of ISIS fighters. He added the mission of American troops there would not be indefinite.

“At the end of the day my expectation is that we will have fewer [troops in Syria] than we had before,” he said. “And they will be going home.”