Troop levels are down, but US says over 18,000 contractors remain in Afghanistan 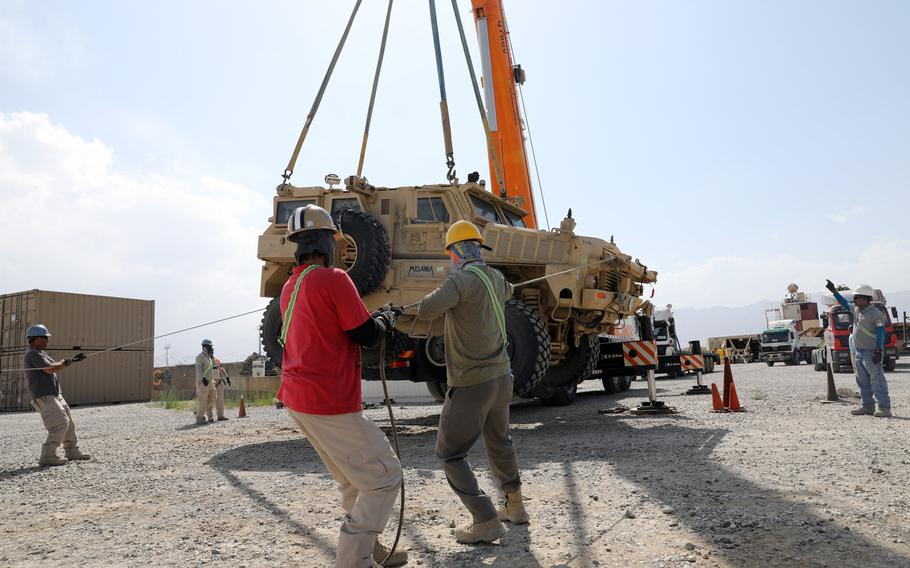 Civilian contractors prepare to load a Mine Resistant Ambush Protected vehicle on to a flatbed trailer at Bagram Airfield, Afghanistan, July 12, 2020. The U.S. has more than 18,000 contractors in Afghanistan and about 2,500 troops, an Army report said this week. (Corey Vandiver/U.S. Army)

More than 18,000 contractors remain in Afghanistan, a Defense Department report released this week said, after the Pentagon announced Friday it had reduced its troop total in the country to 2,500.

The contractor population decreased by about 4,300 from last October, down about 20%. The drawdown of U.S. troops over the last year “drove reductions in requirements for contracted support,” the report said.

About one service member deployed for each contractor a decade ago, at the height of the U.S. troop presence in Afghanistan.

The ratio grew as limits on troop levels led to a reliance on contractor and temporary duty personnel, a Congressional Research Service paper in 2019 found.

Concerns about DOD contractor use go back more than a decade. In 2008, Congress established the bipartisan Commission on Wartime Contracting in Iraq and Afghanistan to look into the issue.

The commission found in 2011 that the two wars led to an “unhealthy over-reliance” on contractors, which often overwhelmed the U.S. government’s ability to effectively oversee or manage them, it said.

About 4,700 of the contractors are Afghans hired locally, but nearly three-quarters come from outside the country, including about a third who are U.S. citizens, the data in this week’s report show. Many of the rest are from developing countries such as Uganda and Nepal.

Slightly less than half work in logistics, maintenance or base support, with 16% working as security contractors, the report said. Only 1,575, mostly Americans and other foreigners, are armed security personnel.

Due to coronavirus-related travel restrictions, some foreign contractors were stuck in Afghanistan for months without pay after their jobs were cut, workers told Stars and Stripes in July and August.

The backlog of contractors awaiting repatriation was resolved in December after meetings with the State Department, the Pentagon said in the report.

“There are currently no repatriation challenges requiring (State Department) support,” the report stated.