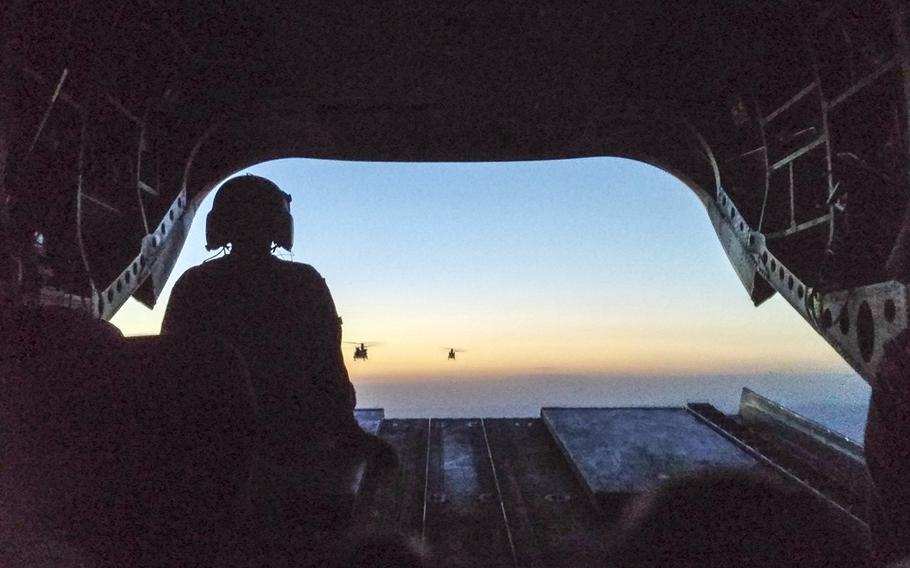 Members of Operational Detachment-Alpha 0224 are transported via Chinook Helicopters to conduct various missions across Afghanistan in 2016. The United Nations has expressed grave concern over escalating violence in Afghanistan’s southern Helmand province, where it says airstrikes by international forces likely killed more than a dozen civilians, mostly women and children. (U.S. Army)

Members of Operational Detachment-Alpha 0224 are transported via Chinook Helicopters to conduct various missions across Afghanistan in 2016. The United Nations has expressed grave concern over escalating violence in Afghanistan’s southern Helmand province, where it says airstrikes by international forces likely killed more than a dozen civilians, mostly women and children. (U.S. Army) 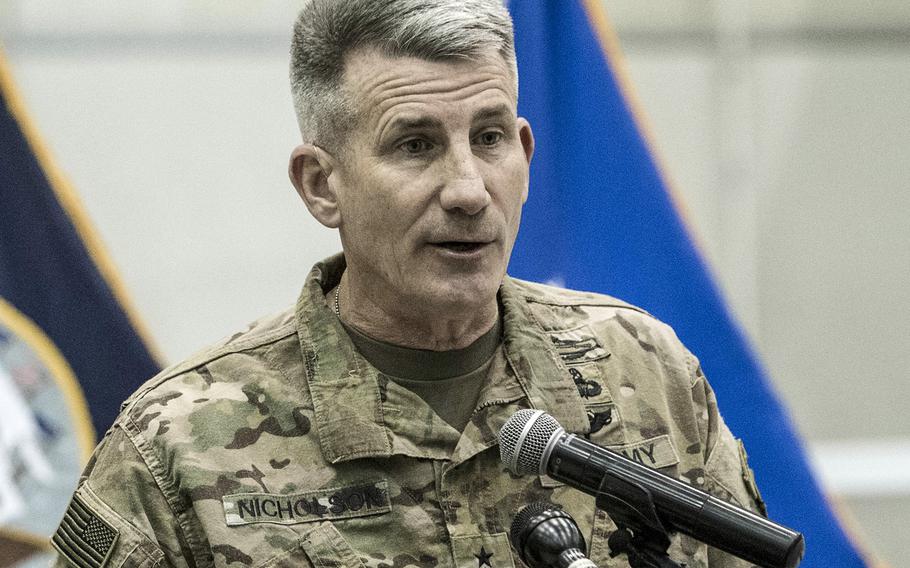 Army Gen. John Nicholson, commander of Resolute Support and U.S. Forces Afghanistan, answers questions after arriving at the Resolute Support Headquarters in Kabul, Afghanistan, on Dec. 9, 2016. Nicholson, was in Washington, D.C. on Thursday, Feb. 9, 2017, testifing before the Senate Armed Services Committee where he said more troops are needed for the fight in Afghanistan. (Brigitte N. Brantley/U.S. Air Force) 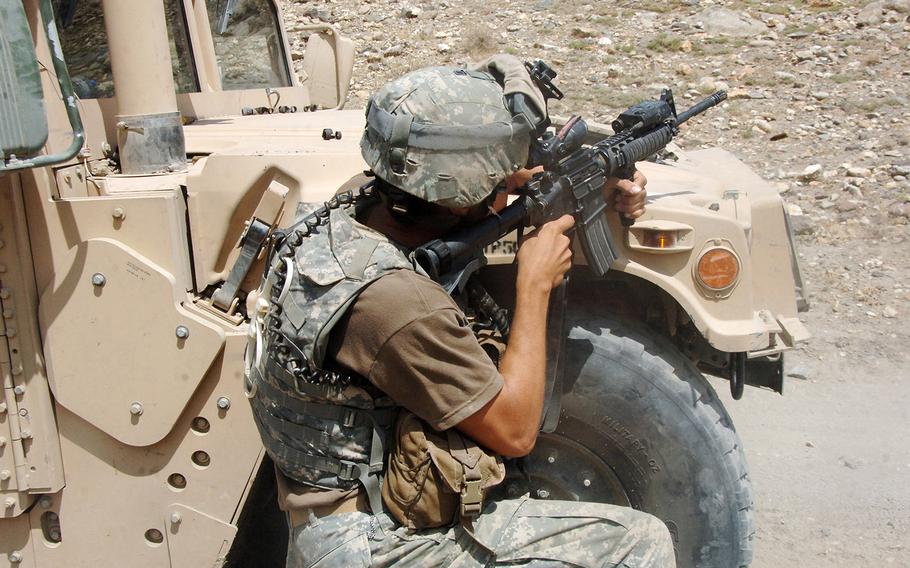 WASHINGTON — The top U.S. military commander in Afghanistan told lawmakers Thursday that he needs several thousand additional troops to break “a stalemate” in the 15-year-old war against the Taliban and other terrorist organizations including al-Qaida and the Islamic State group.

Army Gen. John Nicholson told the Senate Armed Services Committee that more troops could come from the United States or other NATO nations and would be tasked with training Afghanistan’s military and police forces to provide better offensive capabilities in the fight that the Afghans have led since the beginning of 2015. The general also warned lawmakers of growing influence from Russia and Iran in the country.

The general did not specify how many additional troops he needs. He told Sen. Lindsey Graham, R-S.C., he did not need 50,000 NATO troops in the country, but he did not rule out the potential for up to 30,000.

“Sir, that’s a conversation I’d need to have with my chain of command,” Nicholson told Graham during the Senate hearing.

There are about 8,400 American troops in Afghanistan now supporting the NATO and counterterrorism missions. Thirty-eight additional NATO countries provide about 6,300 troops to the mission, according to NATO.

Sen. John McCain, R-Ariz., the committee’s chairman, criticized the troop-limit for Afghanistan that was imposed last year by President Barack Obama as a political move, but he also blasted President Donald Trump for failing to publicly discuss his position on the war, which received little attention throughout the presidential campaign.

“The new administration has an opportunity to turn the page and finally give our commanders the resources and authorities they need to seize the initiative and force the enemy to react, instead of the other way around,” McCain said. He added later, “We are not winning, and … we need a strategy to succeed.”

Adding more NATO trainers would be the first step in a new strategy, Nicholson said. In recent years, the Afghan security forces have primarily focused on retaining the land that it controls, but a boost in NATO training capacity could surge the Afghans ability to take the offensive.

The Afghan government controls about 57 percent of the country’s populated districts, about 15 percent fewer than it controlled in November 2015, according to the most recent report by the Special Investigator General for Afghanistan Reconstruction released Jan. 30.

Nonetheless, Nicholson said he is confident in the Afghan forces’ abilities. The Afghan special operations forces are “the best in the region,” he said. He also touted the nation’s fledgling air force, which while overworked has made “amazing progress for such a young capability.”

Nicholson also said his chain of command, including U.S. Central Command chief Army Gen. Joseph Votel and Defense Secretary Jim Mattis, is discussing how to add trainers who would embed with Afghan forces closer to the fighting than NATO is operating now. NATO trainers work primarily at the “corps level,” advising the nation’s most senior military commanders. But Nicholson would like to move them as low as the “brigade level,” where they could aid units directly involved in combat.

The United States and Germany have temporarily pushed trainers below the corps level to provide units fighting on the front-lines across Afghanistan direct advise when necessary. For example, he said, advisers were deployed to Kunduz last year to help the Afghan forces repel a Taliban offensive on that city in the nation’s northern region.

“It is strictly a question of manning at this point,” he said.

Nicholson also warned senators on Thursday that the United States and Afghanistan have seen increased activity from Russia and Iran within the country in recent months, including cooperation between the two nations and the Taliban.

Iran has primarily worked in western Afghanistan to recruit Shiite Muslims from that nation to fight against the Islamic State group in Syria, Nicholson said. But Russia has negotiated directly with the Taliban, citing concerns about that terrorist organization in Afghanistan’s eastern region.

“When we look at Russian and Iranian actions in Afghanistan, I believe that they are in part there to undermine the United States and NATO and prevent our strong partnership that we have with the Afghans in the region,” Nicholson said.

Russia has claimed the Taliban is the only group fighting against the Islamic State group in Afghanistan, and it has hosted Taliban leaders in meetings about the country’s future without inviting the Afghan government or the United States to participate.

Those actions could give the Taliban “legitimacy” in the world’s eyes, Nicholson said, adding it is the U.S. military and the Afghan security forces who have successfully pushed the Islamic State group into a small part in Nangarhar province.

The terrorist group once controlled about 11 districts, but after three U.S.-Afghan counterterrorism operations in 2016, it only controls three or four, Nicholson said.

“The Taliban is not achieving the key effects of reducing [the Islamic State group],” he said. “That is coming from the United States and the Afghan counterterrorism effort … but they are still there and they have shown an ability to conduct suicide attacks inside Kabul and elsewhere around the country.”