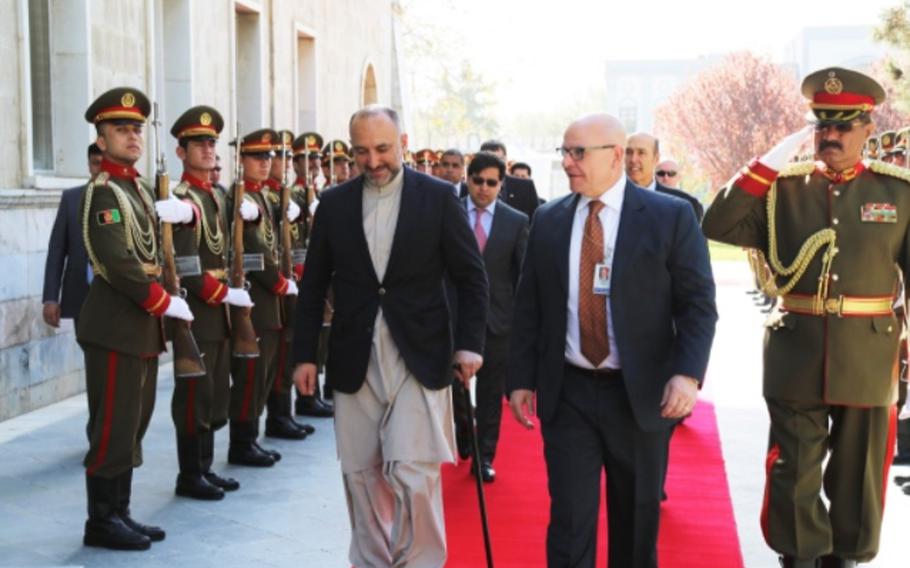 KABUL, Afghanistan – Lt. Gen H.R. McMaster, U.S. National Security Adviser, held talks with American and Afghan leaders in Kabul on Sunday as a part of an assessment to determine U.S. future strategy in the country.

The president’s national security team and the Pentagon are preparing recommendations about how to help Afghan forces fight the Taliban and other militants, as well as what adjustments should be made to U.S. counter-terrorism operations against the 20 U.S.-designated terrorist organizations that have set up shop inside Afghanistan.

Washington has not publicized a date for when the recommendations will be made.

One issue to decide is whether the White House will send more troops to the conflict, now in its 16th year. After a high of about 130,000 troops, NATO has drawn down to about 12,000 troops, among them 8,400 Americans. President Barack Obama wanted to have U.S. troops out of the country by the end of 2016, but that plan had to pared back after the Taliban proved stronger than expected.

In February, the top U.S. commander in Afghanistan, Gen. John Nicholson, told Congress he needed several more thousand troops, mostly to advise Afghan security forces who have been in charge of the fight for the last four years.

Since the majority of NATO troops left the country two years ago, Afghan forces have lost control of 40 percent of the country. NATO trainers had been pulled back to the ministerial and corps (division) level after 2014, but Nicholson would like to return advisers to the brigade, and possibly battalion, level, where day-to-day operational decisions are made.

McMaster did not comment on his meetings in Kabul, but a statement from the office of Afghan President Ashraf Ghani emphasized the need to fight corruption within the country’s security forces.

“The Afghan government is committed to fighting corruption in Afghanistan,” the statement said. “We’ve taken practical steps, and we’ve made progress.”

Anti-corruption reforms were a central part of NATO’s work with Afghan security forces over the winter, when battlefield fighting usually subsides. Some Afghan commanders’ practice of inflating the number of their forces, to siphon off the salaries of “ghost soldiers,” hobbled military operations last year when local units turned out to have fewer numbers than planners expected.

Similarly, other commanders’ practice of selling off supplies, such as fuel and ammunition, undermined the morale of front-line soldiers, who often abandoned their posts and ceded territory to the Taliban.

Meanwhile, also on Sunday, Afghanistan’s Ministry of Defense announced it had kicked off the summer fighting season. A six-month operation dubbed “Khaled” has begun, said Gen. Murad Ali Murad, the ministry’s deputy chief of staff. Initial phases will concentrate on eight provinces, including Helmand, Kunduz, Uruzgan, and Farah, where some of the fiercest fighting has taken place over the last year.