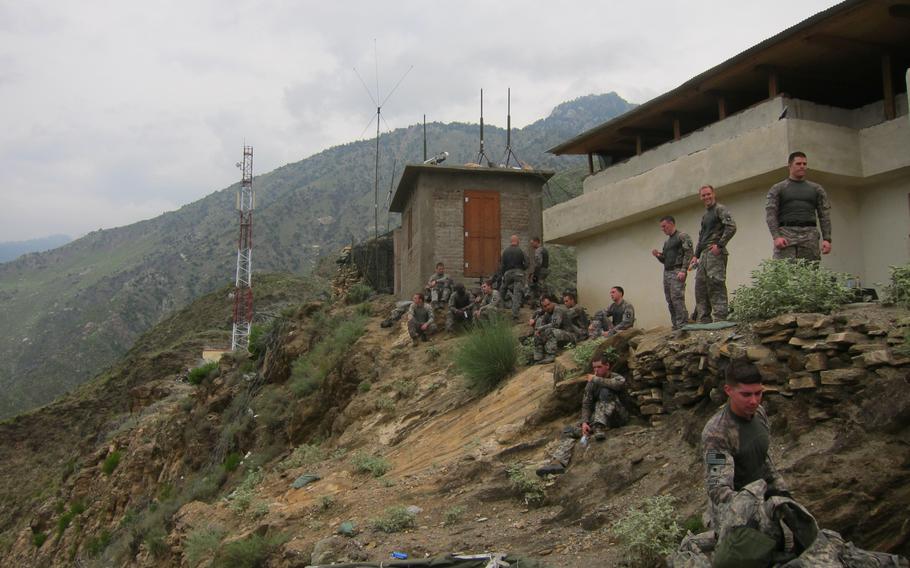 U.S. soldiers watch from an observation post in the Pech Valley in Afghanistan in 2010. (Wesley Morgan)

U.S. soldiers watch from an observation post in the Pech Valley in Afghanistan in 2010. (Wesley Morgan) 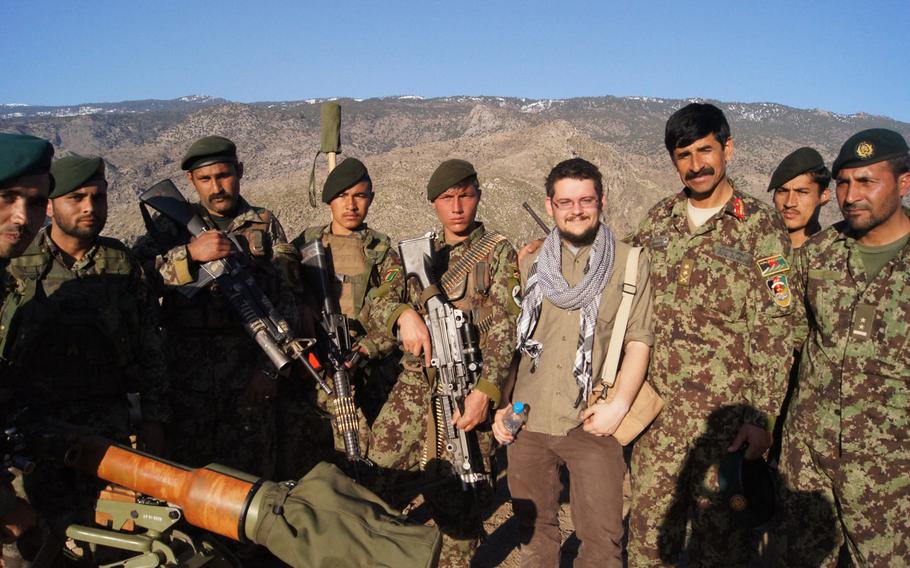 Wesley Morgan, author of the ''The Hardest Place: The American Military Adrift in Afghanistan's Pech Valley,'' stands with Afghan soldiers in the Pech Valley in 2013. (Wesley Morgan) A soldier from the 101st Airborne Division patrols the Pech Valley in northeastern Afghanistan in 2010. The book ''The Hardest Place: The American Military Adrift in Afghanistan’s Pech Valley'' explores how the valley eventually became Taliban territory. (Wesley Morgan)

America’s deadliest infantry battle of the Afghan War began in the early hours of July 13, 2008. Taliban fighters unleashed a torrent of machine gun fire and rocket-propelled grenades at a newly built American base in the town of Want in northeastern Afghanistan.

The base, located in area that had turned against the Americans, was nearly overrun. Just under 50 U.S. troops fought waves of enemies, mere feet away from them.

The battle ended with nine Americans dead and 27 wounded. The U.S. withdrew from Want, sometimes written as Wanat, shortly after.

The soldiers displayed courage under fire, but why had they been in such a desperate situation in the first place? That question lies at the heart of “The Hardest Place: The American Military Adrift in Afghanistan’s Pech Valley,” a new book by military affairs reporter Wesley Morgan on the failed U.S. counterinsurgency campaign in rugged northeastern Afghanistan.

The book focuses on the Pech River Valley, and its tributaries, the Korengal and the Waygal. Known for some of the fiercest fighting of the war, the region was the setting of the documentaries “Restrepo” and “Korengal” by filmmaker Sebastian Junger.

Morgan’s book is a compendium of failures by U.S. military officers in the Pech, leading to broken soldiers, dead civilians and a valley lost to the Taliban. He interviewed hundreds of U.S. troops and local Afghans to go beyond not just the “who” and “how” of each battle, but the often-hazy question of “why?”

For example, why had intelligence of a large, imminent attack been ignored before the Want battle? Why hadn’t there been a drone overhead? Whose fault was it that those nine soldiers died?

A military investigation after the battle recommended two U.S. officers be criminally charged for “insufficient oversight,” Morgan writes, but the decision was overturned later.

This lack of accountability repeats throughout the book, in which the U.S. seems ever eager to highlight the heroism of its fighters, while ignoring the mistakes of the officers who put them in harm’s way.

“When soldiers on the ground are put into positions where they commit acts of desperate heroism, something has gone wrong,” Morgan wrote.

Today, the Taliban controls much of the Pech. But when U.S. forces entered the valley almost two decades ago in search of al-Qaida operatives, locals welcomed them. When one of the Green Berets shot and killed a villager, the others understood that it was an accident and accepted their apologies.

But as U.S. troops stayed in the Pech, their mission expanded from killing al-Qaida to finding anyone connected to them, to killing Taliban, to building roads, to allying with corrupt politicians and unwittingly taking sides in local timber rivalries.

Seemingly every village had stories about how the Americans killed someone dear to them. U.S. troops apologized each time. Eventually the apologies fell on deaf ears.

The book is infuriating in its repetitiveness. This is not the fault of the author, but of the U.S. military officers who kept repeating their predecessors’ mistakes, and who come off as allergic to learning.

An example of this amnesia occurred after the infamous Operation Red Wings, where three Navy SEALs died, and one would almost be captured. In the movie “Lone Survivor,” based on a book by one of the SEALs, Marcus Luttrell, four operators infiltrate an isolated Afghan valley in search of a close associate of Osama Bin Laden, leading to an intense firefight with more than 100 fighters.

Morgan adds additional context to Luttrell’s narrative, which has been criticized for its inaccuracies.

The SEALs had most likely been discovered immediately, as they were placed in the backyard of the enemy by a helicopter that villagers said they could hear from miles away.

The lightly armed SEALs were killed by fighters numbering closer to the few dozen Luttrell described in his mission debriefing, not the 140 he had in his book, Morgan wrote.

Morgan adds that fight that most likely did not last as long as Luttrell described, based on how few shell casings Rangers at the scene found.

Other units who were supposed to rescue the SEALs were delayed. Another team of Navy SEALs rushed to the scene without coordinating with a different rescue force, and without waiting for attack helicopters to clear the landing site. Their helicopter would be shot down by an RPG, leading to the deaths of all 16 aboard.

The target, who escaped, was not connected to Bin Laden, but a local thug whose reach barely extended outside his home province.

The operation’s failure was the result of poor planning, overconfidence and leaders unwilling to communicate, Morgan contends.

“But there was no reckoning with what had gone wrong during Red Wings,” he wrote.

One SEAL who visited the battle site after Red Wings said, “There’s a deep pain among the survivors, when you take a version of their story and just tell the parts that allow it to be a legendary epic about flawless heroism,” the SEAL said, “when you uphold only the hero image, you deny those same heroes the ability to commit mistakes ... [creating] a distorted reality.”

Morgan’s book does not shy away from these mistakes. It's a sober telling that might help future military leaders who wish to avoid the kinds of failures that lost the Pech Valley.