Taliban says it will not send female delegates to peace talks 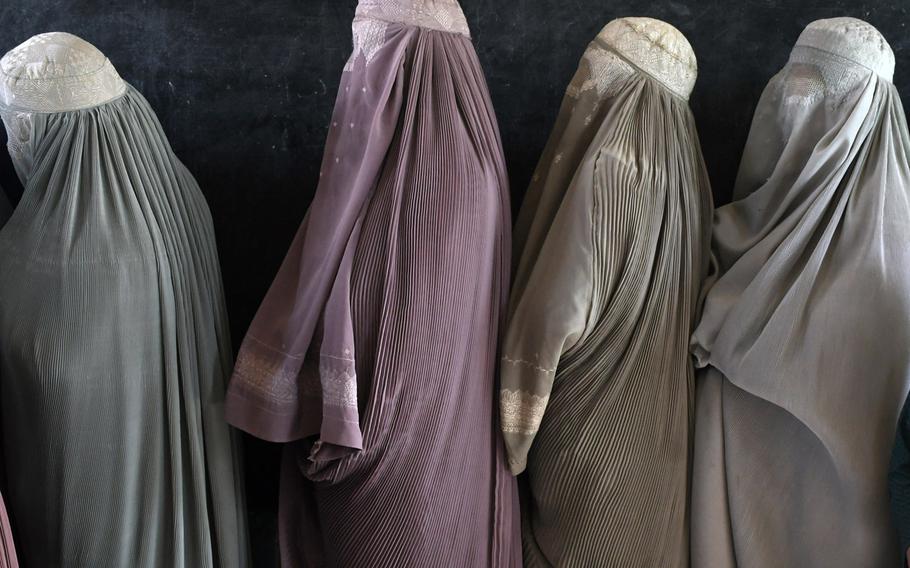 Buy Photo
Women wait in line to vote at a polling center in Kandahar, Afghanistan in 2018. The Taliban have refuted a report that women will be included in their delegation attending peace negotiations in Qatar later this week. (Phillip Walter Wellman/Stars and Stripes)

KABUL, Afghanistan — Women will not be part of the Taliban’s peace negotiating team, though they are expected to take part in meetings in Qatar this week as part of an effort aimed at ending the 17-year war.

Three days of talks beginning Friday, which are separate from U.S.-Taliban discussions, will include Afghan lawmakers and government officials acting as private citizens, among others, Afghan officials said. But the Taliban have so far refused formal talks with the Kabul government.

Earlier reports had quoted Taliban chief spokesman Zabihullah Mujahid as saying the insurgents would send women among their delegation, but Mujahid now says he was misquoted.

“I said there will be a number of women participating in the upcoming intra-Afghan conference, as was the case in Moscow,” Mujahid said in a statement, referring to previous unofficial meetings in Russia in February that included some Afghan women, but no representatives of the Kabul government or the U.S.

In Moscow, Fawzia Koofi, a former member of the Afghan parliament, had encouraged the Taliban to bring women — including the widows and mothers of killed insurgents — to future talks, she said.

She was “happily surprised,” she said, by a report on Monday in which the Reuters news agency quoted Mujahid as saying women “who have been supporters and part of the [Taliban] struggle” would be present at this week’s talks, she said.

Women were denied basic human rights such as education during the Taliban’s rule of Afghanistan in the late 1990s, but since a U.S.-led invasion toppled the regime in 2001, their rights have advanced, particularly in urban areas.

The insurgents insist their views on women have softened. But women still won’t be included as a part of any formal negotiation team, Mujahid said after the Reuters report was published.

“We said nothing about including women in the negotiation team in talks with the U.S. and there is no need for that,” he said in a statement on Tuesday.

The ranks of the militant group’s fighters and leaders do not include women. Previous meetings with the Taliban in Norway and Qatar followed a similar format, with the Taliban agreeing to discuss matters with women but not bringing any themselves.

The formal talks, led on the U.S. side by special peace envoy Zalmay Khalilzad, are aimed at securing an agreement that would allow a U.S. troop pullout while preventing al-Qaida and other terrorist groups from launching attacks from Afghan soil. Khalilzad has also pressed for a cease-fire and the involvement of the Kabul government in future discussions. The Taliban, however, view the Afghan government as Washington’s “puppet” regime.

Some Afghans and other observers of the peace process, however, are worried that women’s rights could be eroded by any agreement that gives the Taliban some form of political power.

The Taliban need to do more to convince Afghans that those rights will be preserved, Koofi said.

“Even though they’re not doing this now, I still think they need to put some trust-building measures in place and take some steps to ensure things for women don’t get worse in Afghanistan,” Koofi said. “It’s still too early to be optimistic. We still need them to build trust.”