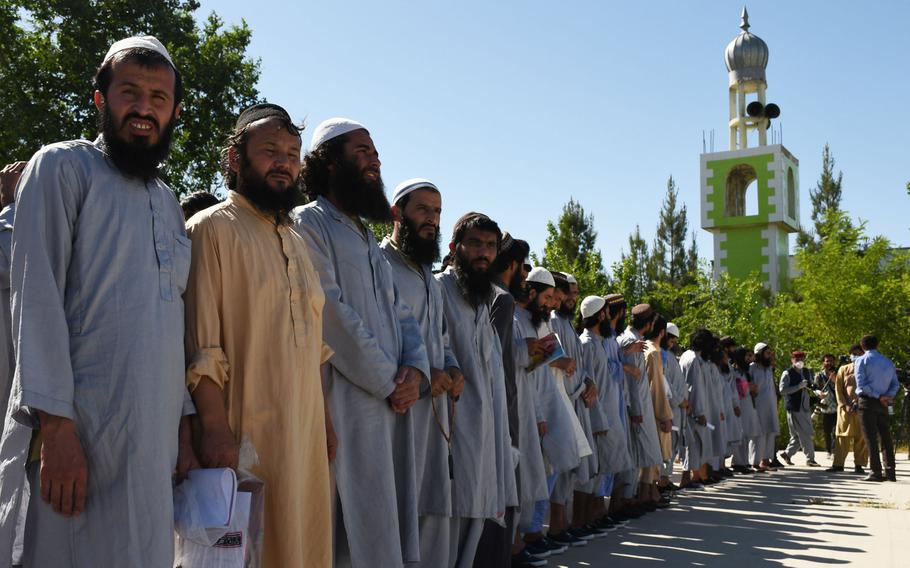 Taliban prisoners line up at Bagram prison before being released on May 26, 2020. Hundreds of Taliban prisoners released under the U.S.-Taliban peace deal have been rearrested after rejoining the insurgency, Afghanistan's national security advisor said. (Phillip Walter Wellman/Stars and Stripes)

Taliban prisoners line up at Bagram prison before being released on May 26, 2020. Hundreds of Taliban prisoners released under the U.S.-Taliban peace deal have been rearrested after rejoining the insurgency, Afghanistan's national security advisor said. (Phillip Walter Wellman/Stars and Stripes) 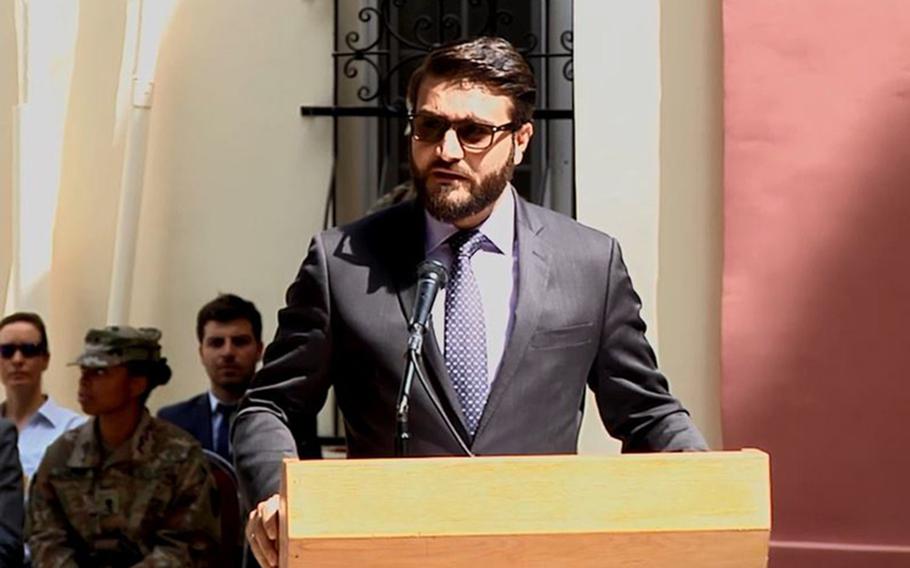 In this screenshot, Afghanistan National Security Adviser Hamdullah Mohib speaks at a NATO Resolute Support change of command ceremony in Kabul, Afghanistan in September 2018. Hundreds of Taliban prisoners released under the U.S.-Taliban peace deal have been rearrested after rejoining the insurgency, Mohib said. (John Roberts/NATO)

“We have recaptured 600 of the freed individuals because they were fighting alongside the Taliban even though they promised they would not fight again,” Mohib said.

Over 5,000 Taliban prisoners were released last year in exchange for 1,000 Afghan security force personnel captured by the guerrillas. The prisoner exchange, which was a part of the U.S.-Taliban deal struck last February, was a precursor for the ongoing peace talks between the insurgents and the Afghan government.

The Kabul government — which did not participate in talks leading up to the agreement — was initially hesitant to free the prisoners, but eventually bowed to pressure from Washington. Many in Afghanistan criticized the move, saying it could worsen the security situation.

Mohib, who attended a security meeting, did not specify how many former prisoners besides those rearrested are believed to have rejoined the insurgency. All of the released prisoners signed a pledge that they would no longer fight.

Taliban officials insist none of the former detainees have returned to combat and rejected the claim that 600 had been recaptured. Only about 40 of the men are back in government custody and most of those were seized during raids on their homes and are innocent, spokesman Zabiullah Mujahid told Stars and Stripes on Monday.

The insurgents have continued to conduct attacks across Afghanistan despite the agreement with the U.S., the start of peace talks with the government in September and repeated calls for a cease-fire from Washington and Kabul.

The relentless violence has led to doubts voiced by U.S. and Afghan government officials that the guerrillas aren’t serious about peace. All signs suggested the group is preparing to intensify attacks in the spring, when the traditional fighting season starts and just weeks before all international forces may pull out of the country, Mohib said.

Under the U.S.-Taliban deal, foreign forces could withdraw from Afghanistan by May if the Taliban live up to vague counterterrorism promises.

“The Taliban does not want peace. Our intelligence … shows that the Taliban is preparing to fight. They think that they will win militarily,” Mohib said. “The obligation is on us to become fully prepared.”

The Biden administration announced Friday that it planned to review the deal and determine whether the Taliban are living up to their promises.

There are currently 2,500 American troops in the country, the lowest figure since the first months of the war nearly two decades ago, and down from roughly 13,000 this time last year.