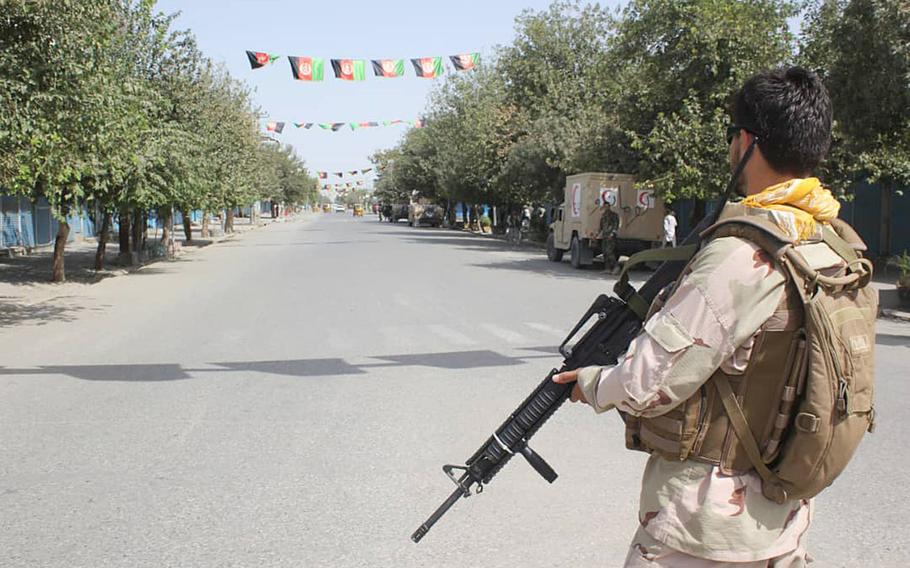 KABUL, Afghanistan — The Taliban launched a major attack on the city of Kunduz on Saturday as negotiators from the group continued talks with American officials aimed at ending the U.S.’s longest war.

Fighting broke out in the early morning hours and continued throughout the day, with most of the fighters eventually taking shelter in civilian areas such as homes and at least one health clinic, said Defense Ministry deputy spokesman Fawad Aman.

“At one place, the enemy is using a maternity clinic as their bunker and are keeping civilians as hostages,” Aman said, adding that the number of hostages in the clinic was unknown.

Afghan special forces were sent from Kabul to support local forces in the northern city and several airstrikes were conducted, Aman said.

An unnamed official told the New York Times that U.S. forces provided “some support,” without elaborating.

The top U.S. commander in Afghanistan, Gen. Scott Miller, traveled to Kunduz after the fighting broke out to meet with local security officials, the U.S. military in Afghanistan said, without providing further details. The military refused to say whether U.S. forces were involved in operations to counter the Taliban’s assault.

At least 10 people were killed by an explosion in the early evening that targeted Kunduz police chief Manzoor Stanekzai while he was speaking to a group of reporters, the Interior Ministry said in a statement. Stanekzai was one of several people wounded by the blast.

Those deaths added to at least nine that were announced by Acting Defense Minister Assadullah Khalid earlier in the day. Three dozen Taliban fighters also died in the fighting. At least three civilians also were killed and more than 40 others were injured, Reuters reported, quoting the head of the city’s health department.

Envoy Zalmay Khalilzad, who has been leading the U.S. in talks with the Taliban, tweeted, “I raised the Kunduz attack in talks today, telling the Taliban that violence like this must stop. In addition, General Miller visited Kunduz today and is focused on assisting Afghan forces defend the city.”

Saturday’s attack came after comments by American and Taliban negotiators suggested they were close to finalizing a deal that would allow U.S. forces to withdrawal from Afghanistan. In exchange, the Taliban would reportedly agree to prevent terrorists from using the country to attack the U.S. or its allies.

Specifics about the U.S.’s pullout might be stalling the agreement, which was widely expected to be announced by Sept. 1.

On Thursday, President Donald Trump told Fox News radio that the U.S. was planning to cut troop numbers from around 14,000 to 8,600 initially, and then “make a determination from there as to what happens.”

Taliban spokesman Suhail Shaheen replied to the comments in an interview with the BBC, saying the group would accept nothing less than a full withdrawal of foreign forces, a demand the group has repeatedly voiced.

The Taliban could see the Kunduz attack as a way of gaining leverage in talks with the U.S.

In a recent interview with CBS news, Shaheen said the killing of two American Green Berets by Taliban fighters earlier this month “should have a positive impact” on the negotiations, as they highlight the bloody nature of the war for all sides.

Afghan presidential spokesman Sediq Seddiqi told reporters on Saturday that the Taliban’s assault on Kunduz was “completely against the peace talks.”

The Taliban seized Kunduz for about two weeks in 2015 before U.S. and Afghan forces pushed the fighters out. A year later, the group again fought its way to the city center but was quickly driven out.

In the 2015 clashes, U.S. forces bombed a hospital run by Doctors Without Borders, killing more than 40 civilians and wounding dozens more. President Barack Obama later apologized and offered condolence payments to the families of those killed.