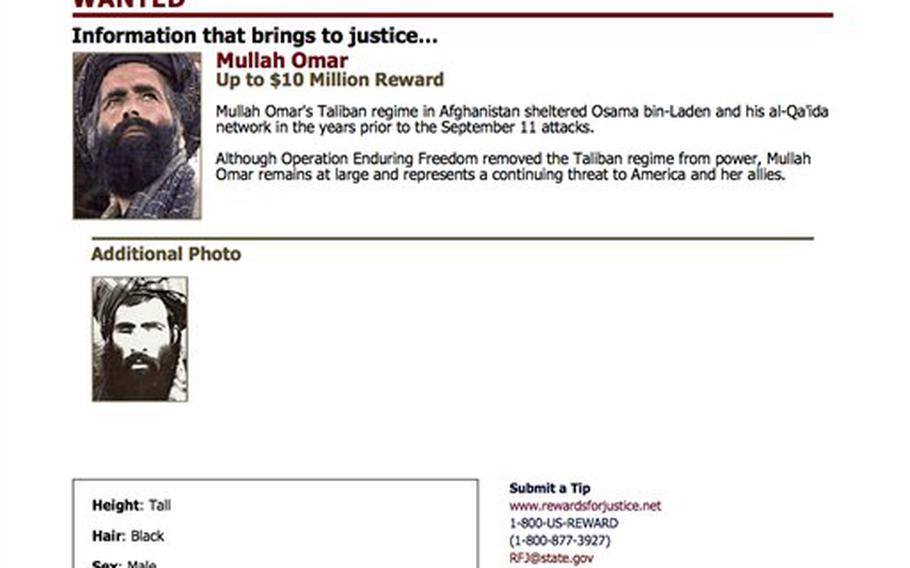 In this undated image released by the FBI, Mullah Omar is seen in a wanted poster. (FBI)

KABUL, Afghanistan — The Taliban confirmed on Thursday that their founder and leader Mullah Mohammad Omar had died, as Pakistan canceled a new round of peace talks between the Afghan government and the insurgents due to “uncertainty” caused by the death.

Also on Thursday, a Taliban commander said the group’s ruling body had already elected Mullah Akhtar Mansoor to replace Mullah Omar, who was reported to have died in Pakistan in 2013. Mansoor, who served as Mullah Omar’s deputy, was governor of Kandahar province and a Cabinet minister before the 2001 U.S.-led invasion that ousted the Taliban regime.

The next round of negotiations between the insurgents and the Afghan government was scheduled to be held Friday in Murree, a hill resort near the Pakistani capital of Islamabad that hosted the first formal talks between the warring sides on July 7.

The cancellation cast doubt on the future of the nascent peace process, which a statement attributed to Mullah Omar had indirectly endorsed after the initial meeting.

“In view of the reports regarding the death of Mullah Omar and the resulting uncertainty, and at the request of the Afghan Taliban leadership, the second round of the Afghan peace talks, which was scheduled to be held in Pakistan on 31 July 2015, is being postponed,” the Pakistani government said in a statement. It expressed hope that the Taliban leadership would remain engaged in efforts to negotiate a peaceful end to the 14-year war.

The Taliban initially denied that Mullah Omar, who hasn’t been seen in public since U.S.-backed coalition forces defeated the Taliban in the aftermath of the 9/11 attacks, was dead.

But on Thursday, a Taliban commander in southern Afghanistan, said the movement’s leadership, the Shura, had already appointed Mullah Omar’s deputy to replace him.

“It is a big loss, (Mullah Omar) was the spiritual leader for (Taliban),” said the commander, who spoke on condition of anonymity. “But we are not going to stop; we will follow his path while we are alive.”

Afghan President Ashraf Ghani has made the peace process and an end to the war with the Taliban a top priority since he assumed office in late September.

The first round of talks this month was preceded by a series of unofficial meetings involving Afghan government and civil society figures and representatives of the guerrilla movement that were held in Doha, Qatar; Oslo, Norway; and Urumqi, China.

In addition to the Pakistani hosts, diplomats from the U.S. and China attended the first round as observers. They were also scheduled to participate in the talks on Friday, Pakistani officials said.

Despite the negotiations, fighting between the Taliban and government troops has escalated significantly since the start of the fighting season in April. The guerrillas have managed to overrun a handful of district centers but have been chased out of most of these by government reinforcements.

“We have occupied it,” Taliban spokesman Qari Yusuf Ahmadi said in a telephone interview. He said the attackers killed 39 members of the security forces during the 24-hour assault. The Taliban often exaggerate casualty figures.

The region surrounding Now Zad, located about 280 miles southwest of Kabul, has been a hotbed of Taliban activity throughout the war. Helmand was a focus of President Barack Obama’s troop surge in 2009 and 2010.