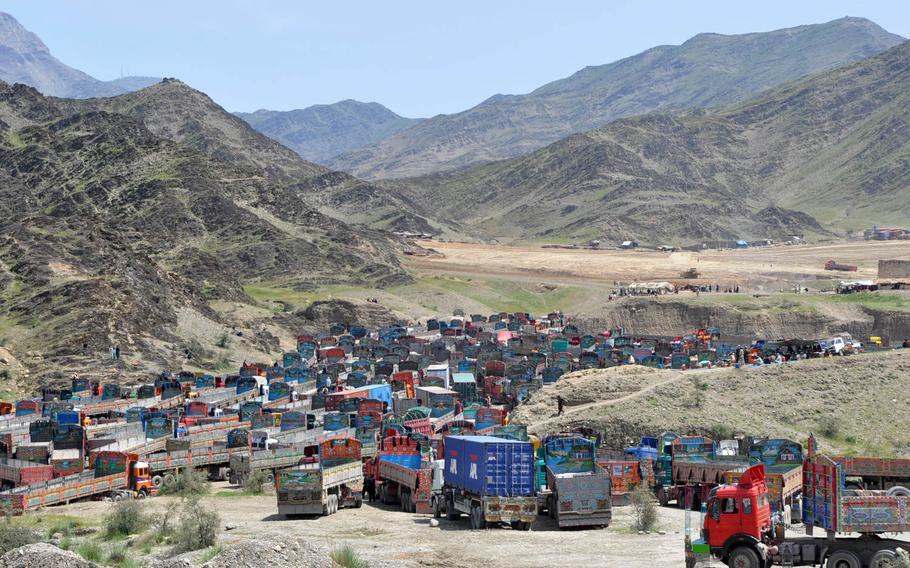 Hundreds of trucks wait to enter Pakistan at the the border crossing at Torkham Gate in Afghanistan in this 2013 file photo. (Josh Smith/Stars and Stripes)

KABUL — Three suicide bombers touched off a battle on the Afghanistan-Pakistan border Thursday that destroyed dozens of trucks carrying NATO military gear out of the country, Afghan officials said.

Insurgents attacked a parking lot at a busy border crossing in Nangarhar province just before 5 a.m., placing magnetic bombs on trucks carrying military vehicles out of the country, according to Ahmad Zia Abdulzai, spokesman for the Nangarhar provincial government. The attack sparked an hours-long gun battle, leaving all three attackers dead and three truck drivers injured.

The Taliban, who often exaggerate the effect of their operations, claimed responsibility for Thursday’s attack, saying they destroyed nearly 50 trucks and more than 90 military vehicles.

Afghan trucking officials have complained that the roads have gotten more dangerous for their drivers in the past year, as the NATO-led International Security Assistance Force (ISAF) pulls troops and materiel from the country ahead of the Dec. 31 deadline for all foreign combat troops to leave Afghanistan.

The attack comes at a time of uncertainty for Afghanistan.