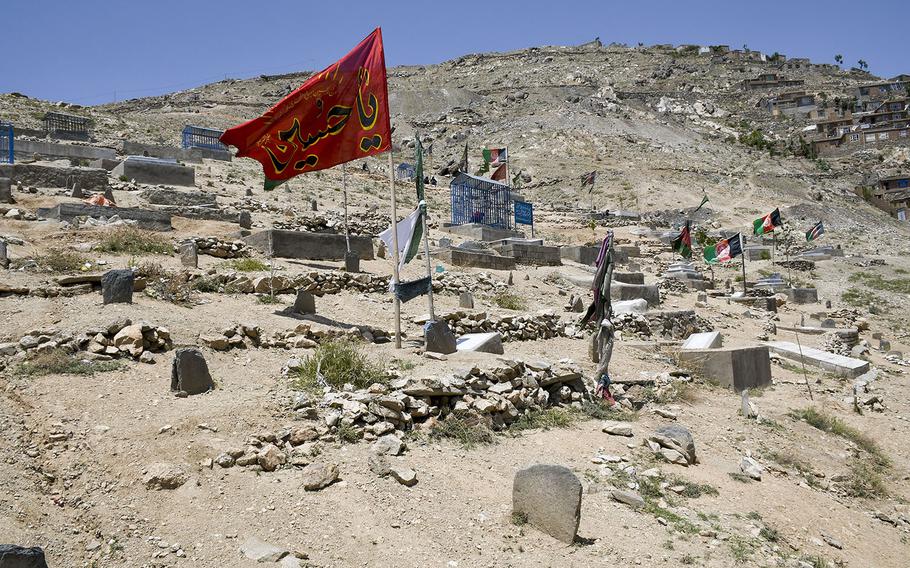 Buy Photo
Flags fly over a cemetery in the Dasht-e-Barchi neighborhood, a majority Shiite district in the west part of Kabul, Afghanistan, where numerous funerals took place after an attack Saturday, May 8, 2021 on a school there. (J.P. Lawrence/Stars and Stripes)

KABUL, Afghanistan — The Afghan government and the Taliban each announced three-day cease-fires Monday to mark this week’s Muslim holiday of Eid al-Fitr, following weeks of heavy bloodshed across Afghanistan.

The holiday marks the end of the fasting month of Ramadan and is expected to begin Wednesday or Thursday when the next new moon is observed.

“All Mujahideen of the Islamic Emirate are instructed to halt all offensive operations against the enemy countrywide from the first till the third day of Eid,” the Taliban said in a statement. “But if the enemy conducts any assault or attack against you during these days, stand ready to robustly protect and defend yourselves and your territory.”

Hours later, Afghan President Ashraf Ghani announced all government forces would lay down their arms over Eid, but instead of welcoming the Taliban’s announcement, he chided the group for recent violence.

The attacks “only cause more disgust and hatred of the Afghan people” toward the Taliban, Ghani said in a statement.

News of the cease-fires came after at least 85 people were killed Saturday in an attack outside a girls’ school in Kabul’s Dasht-e-Barchi neighborhood, the deadliest attack in more than a year, the Afghan Interior Ministry said Monday.

The government blamed the Taliban for the violence, but the group denied any involvement. The local Islamic State affiliate claimed past attacks in the neighborhood, which is largely populated by ethnic Shiite Hazaras.

Clashes between Afghan forces and Taliban fighters have also intensified in the past week around Lashkar Gah, the capital of southern Helmand province, one of several flashpoints testing Afghan troops as international forces withdraw their remaining troops from the country.

The government’s reconciliation council chairman said the Taliban declaration falls short of what is needed.

“Temporary ceasefires on such occasions provides short-term opportunities for our people but are not seen as a durable solution for our country,” Abdullah Abdullah said Monday on Twitter.“ In our view, the solution to today’s crisis in the country lies in engaging in accelerated talks, and announcing a permanent ceasefire and end the war.”

Government and Taliban cease-fires to mark the same holiday were successful in 2018, when insurgents entered cities and posed for selfies with residents. It was the first time during the nearly two-decade war that both sides laid down their arms, proving that Taliban leaders were capable of stopping their followers from fighting at the time.

Since then, the government has repeatedly called on the group to observe a permanent cease-fire. Kabul has said a cease-fire would help facilitate peace talks that began in Qatar in September but have so far yielded no substantial results.

Despite the slow progress of the peace process, U.S.-led international forces officially began fully withdrawing from Afghanistan on May 1. The final 2,500-3,500 U.S. soldiers and roughly 7,000 NATO partner forces will leave by Sept. 11, President Joe Biden and allied leaders have said.

The Taliban will celebrate Eid with Afghanistan “on the verge of attaining complete freedom and independence,” Taliban leader Mawlawi Hibatullah Akhundzada said in a separate statement Sunday.

“We assure the entire nation that following the end of occupation, we shall have an Afghan-inclusive Islamic system,” Akhundzada said.