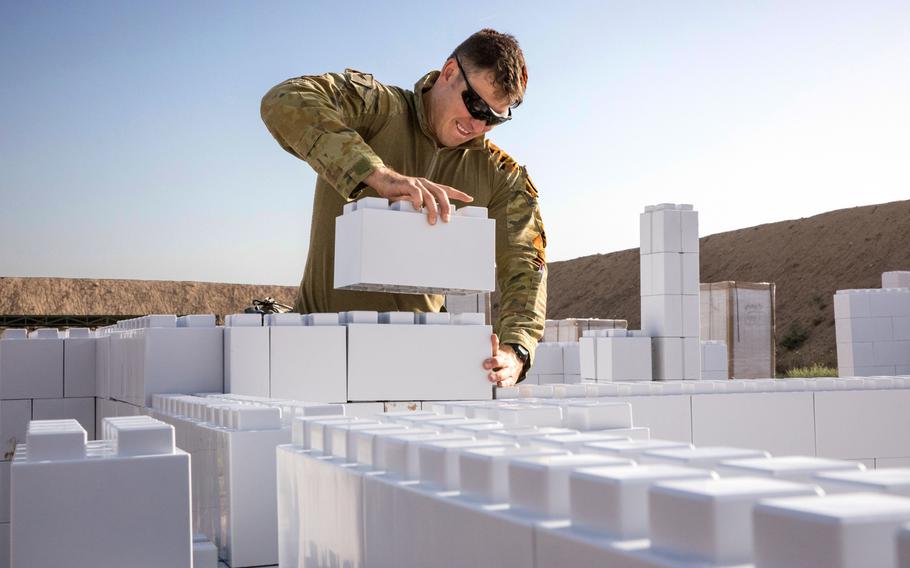 An Australian soldier works on installing a new modular urban training facility on Camp Taji, Iraq, June 2, 2019. The facility, made of hardened plastic bricks, are expected to last longer and allow for greater variety of training options than the wooden facades they are replacing. ()

An Australian soldier works on installing a new modular urban training facility on Camp Taji, Iraq, June 2, 2019. The facility, made of hardened plastic bricks, are expected to last longer and allow for greater variety of training options than the wooden facades they are replacing. () 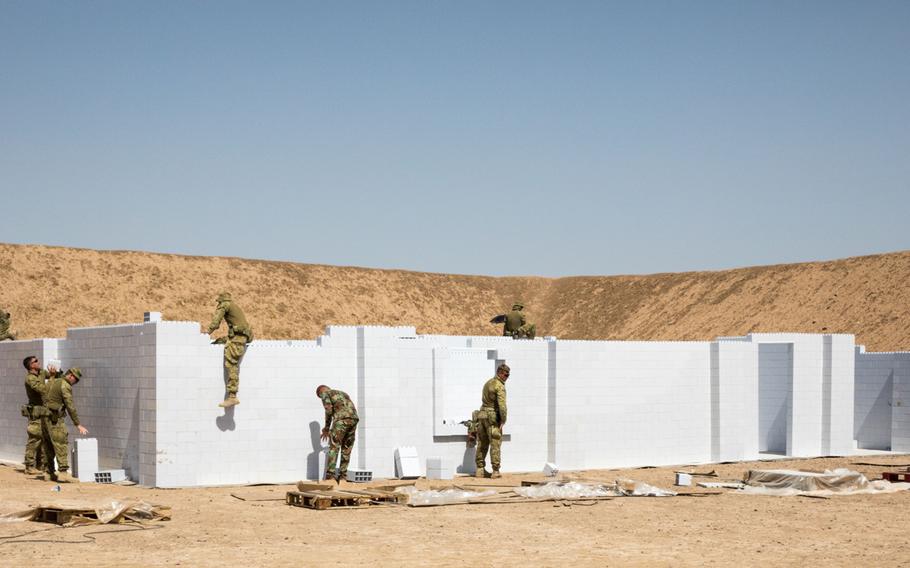 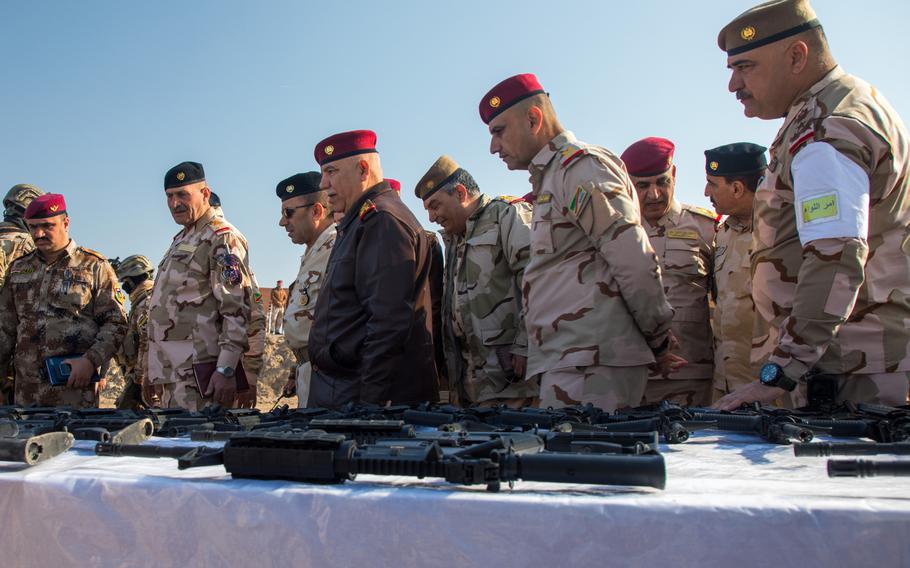 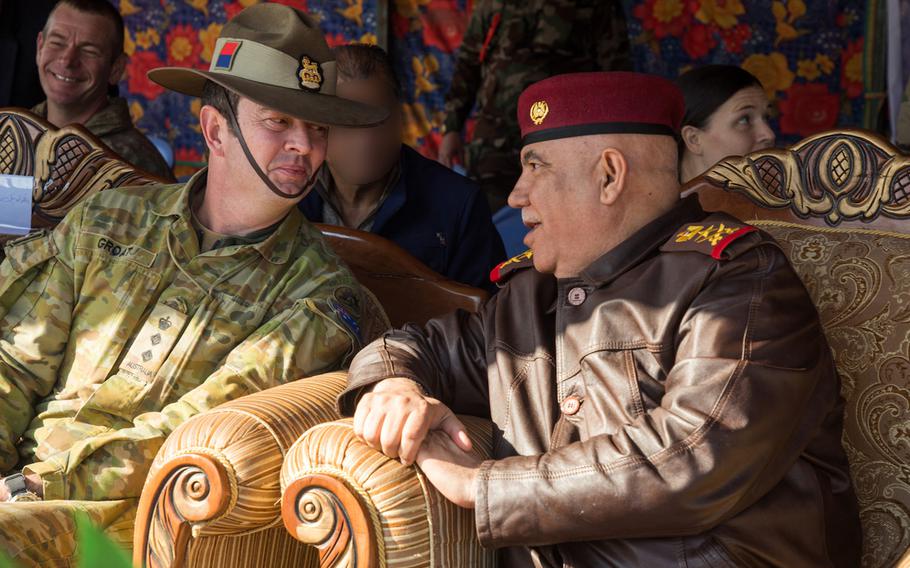 It resembles a giant Lego playset, but Iraq’s new urban training range has a much more serious purpose as a durable facility to aid U.S.-backed forces battling the remnants of the Islamic State group.

The range, located at the 2nd Noncommissioned Officer School of Infantry, or SINCO II, about 25 miles north of Baghdad at the Taji Military Complex, has the capacity to train up to a battalion of Iraqi troops at a time in urban operations, the Australian and New Zealand-led Task Group Taji said in a statement Thursday.

The Iraqis are expected to begin operating the infantry school with minimal support from the coalition by the end of the year, Australian army Lt. Col. Matthew Smith said in a phone interview Wednesday.

The coalition has gradually turned over responsibilities to the Iraqis, who now conduct about 80% of the instruction.

Swapping out the facility’s old wooden structures with white plastic bricks, known as EverBlocks, was part of the task group’s effort to build up SINCO II as a sustainable training program.

“It will have a lasting effect on the Iraqi Army due to a shelf life of up to 10 years. Wooden facades last only a few months,” Australian army Capt. Jeremy Duff said.

The news comes as New Zealand prepares to draw down its contingent of 95 troops in Iraq before fully withdrawing by June 2020.

The U.S. began reducing troop numbers in Iraq early last year after Baghdad declared victory over the group in late 2017. This spring, the U.S. began pulling out of Syria after ISIS was routed from its last sliver of territory there in March.

The Australian and New Zealand troop contribution to the ISIS fight began in 2015 and was initially expected to last just two years. Four years on, a traditional haka dance welcoming the ninth rotation of New Zealand troops to Taji last month may have been one of the last. The Australians also were invited to take part in the dance.

“It demonstrates the pride [New Zealand’s troops] have in their contribution,” Smith said of the dance. The Australian officer said he had “the greatest sense of pride” to have led a unit of troops from that country after hearing stories from his father and grandfather about the Australian and New Zealand Army Corps, or ANZAC, an integrated force originally formed during World War I.

Some in Australia have speculated that its share of the Taji Task Group, about 300 troops, may soon be drawn down as well. Australian defense officials did not respond to an inquiry on the matter Thursday by press time.

With Australian and Kiwi support, SINCO II, which the group established as the Baghdad Fighting School early in the campaign against ISIS, has trained more than 40,000 Iraqi infantry troops, Smith said.

By the end of the year, it will have trained more than 50,000 troops, as Iraqi forces continue to battle remaining ISIS fighters in the country.

SINCO II is focused on training Iraqi brigades of about 2,000 soldiers each in core infantry skills such as marksmanship, urban operations, combined arms operations, weapons handling and the law of armed conflict.

Coalition troops still provide instruction in some specialist weapons and techniques such as sniper training, advanced combat first aid, casualty evacuation and countering explosives, Smith said. They are also conducting “train the trainer” courses to ensure the school will be self-sustaining.

“It was good to see the SINCO II instructors come in and give us a hand so we can help them,” New Zealand army Capt. Jonty Hooson said.