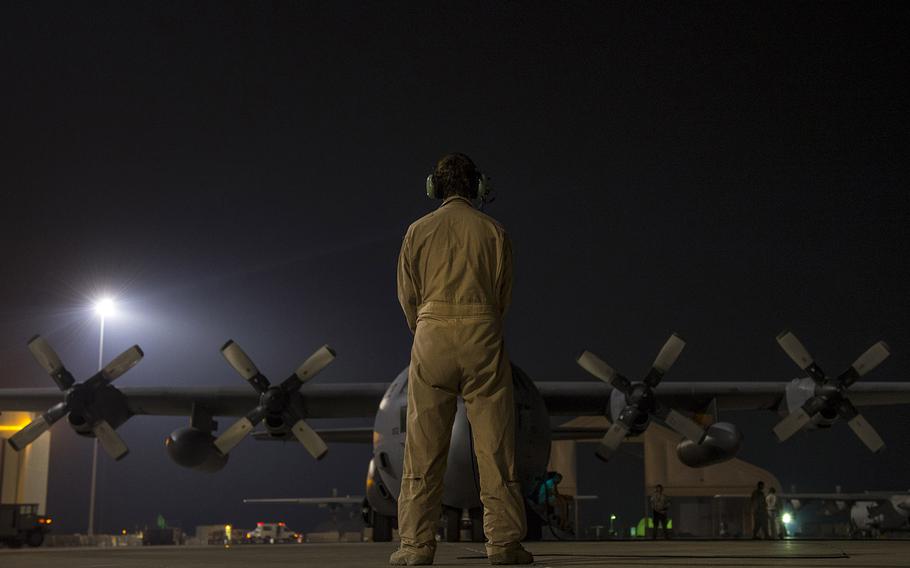 Master Sgt. Pennie J. Brawley assists pilots during a pre-flight inspection prior to a humanitarian airdrop over Iraq on Aug. 13, 2014, at a base in the U.S. Central Command area of responsibility. (Vernon Young Jr./U.S. Air Force)

Master Sgt. Pennie J. Brawley assists pilots during a pre-flight inspection prior to a humanitarian airdrop over Iraq on Aug. 13, 2014, at a base in the U.S. Central Command area of responsibility. (Vernon Young Jr./U.S. Air Force) 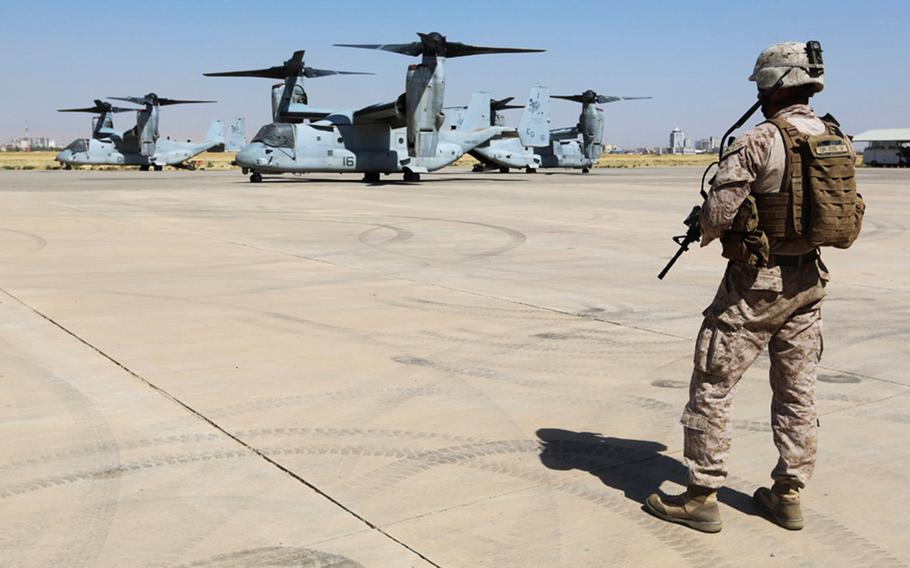 WASHINGTON — The State Department has asked the Pentagon to send additional troops to Iraq to be stationed “in and around Baghdad” to protect diplomatic installations.

One official, who spoke to reporters on condition of anonymity, said that the number of personnel requested is fewer than 300.

“Military planners are considering it” but no decisions have been made, the official said.

The official could not provide a time line for when the Pentagon would decide.

Another official told Stars and Stripes that the additional troops, if deployed, would go to the capital to provide extra security for the U.S. embassy and other facilities.

In recent months, U.S. officials have feared that the embassy, one of the largest in the world, could potentially come under threat from Islamic State militants.

There are currently about 850 American troops in Iraq, including 100 or so that are part of the long-standing Office of Security Cooperation.

In June, the Defense Department sent about 450 servicemembers to protect U.S. diplomatic facilities in Baghdad as well as the Baghdad International Airport, which could be used to evacuate American citizens from Iraq if necessary.

The June deployment was precipitated by sweeping advances across Iraq by the Islamic State. Iraqi security forces, buttressed by Shia militia, have so far been able to prevent significant numbers of militants from reaching the capital.

The official who spoke to reporters is not aware of any specific intelligence about imminent threats that might have prompted the State Department request.

American fighters, attack aircraft and drones conducted 14 strikes Wednesday and another six on Thursday against insurgent Humvees, improvised explosive device emplacements, mortars, and trucks in the area, according to U.S. Central Command.

Since Aug. 8, when the Pentagon began bombing militant targets at the request of the Iraqi government, the U.S. military has carried out 90 strikes across the country. The majority of those have been occurred in recent days as the U.S. began providing air support to Iraqi military and Kurdish pesh merga forces operating on the ground against militants near the Mosul Dam, according to CENTCOM.

Iraqi forces are now in control of the dam, according to DOD.

The latest rounds of airstrikes and the weighing of whether to send more troops to Iraq comes soon after the Islamic State released a video Tuesday showing the execution of American James Foley, a freelance journalist who previously worked for Stars and Stripes.

Foley went missing in 2012 while covering the civil war in Syria.

U.S. officials have confirmed the authenticity of the video.

The militants said the killing was in retaliation for recent U.S. military moves against them, and they threatened to kill another American reporter who they have captured if the American military effort continues.

On Wednesday, President Barack Obama condemned the killing of Foley and suggested that the campaign against the Islamic State will not cease.

“The United States of America will continue to do what we must do to protect our people. We will be vigilant and we will be relentless. When people harm Americans anywhere, we do what’s necessary to see that justice is done and we act against [the Islamic State],” he said at Martha’s Vineyard, Mass., where he and his family are vacationing.

The official who spoke to reporters said Foley’s execution has not affected the scope of the American military campaign.

“There has been no change to the U.S. military mission in Iraq,” according to the official.