Sifting through snapshots from the early years of the Iraq War, 15 years after it began Soldiers approach Saddam Hussein's famed Hands of Victory monument in Baghdad in April 2003. The monument has two sets of crossed swords marking the entrance and exit to a massive military parade ground. The arches were built to celebrate "victory" over Iran. According to Globalsecurity.org, the metal used to make the swords came from melted down Iraqi weapons from the Iran-Iraq war. Helmets thrown at the base of each sword are Iranian, collected on battlefields; and the hands are replicas of Hussein's. (Joseph Giordono/Stars and Stripes)

Soldiers approach Saddam Hussein's famed Hands of Victory monument in Baghdad in April 2003. The monument has two sets of crossed swords marking the entrance and exit to a massive military parade ground. The arches were built to celebrate "victory" over Iran. According to Globalsecurity.org, the metal used to make the swords came from melted down Iraqi weapons from the Iran-Iraq war. Helmets thrown at the base of each sword are Iranian, collected on battlefields; and the hands are replicas of Hussein's. (Joseph Giordono/Stars and Stripes) 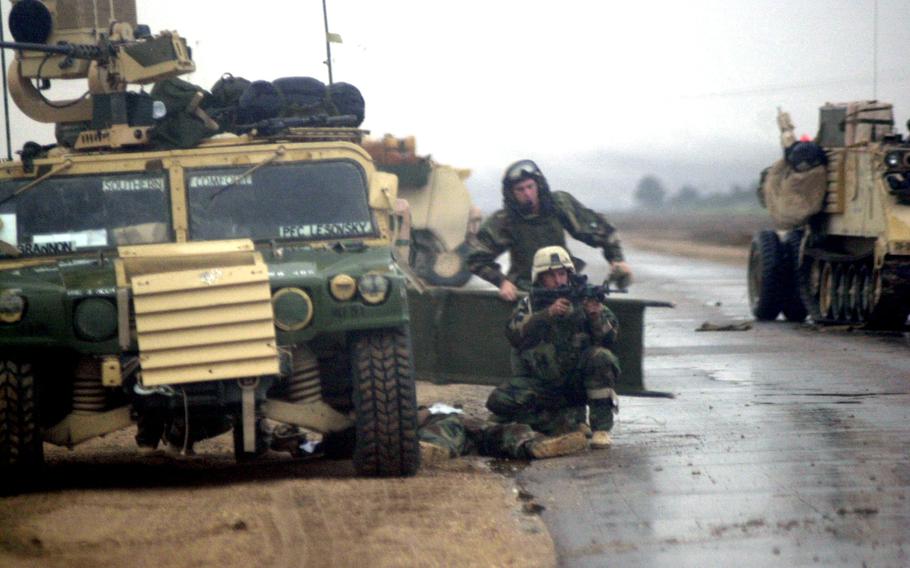 Capt. Scott Brannon, of the 1st Battalion, 15th Infantry Regiment, provides cover fire while medics rush to aid Spc. Shawn Williams, who was shot through the abdomen during an assault on a southern Iraq airfield in March 2003. (Joseph Giordono/Stars and Stripes) U.S. Marines line up behind a road barrier as they secure a key bridge along a main supply route during the march to Baghdad, Iraq in March 2003. (Mark Oliva/Stars and Stripes) 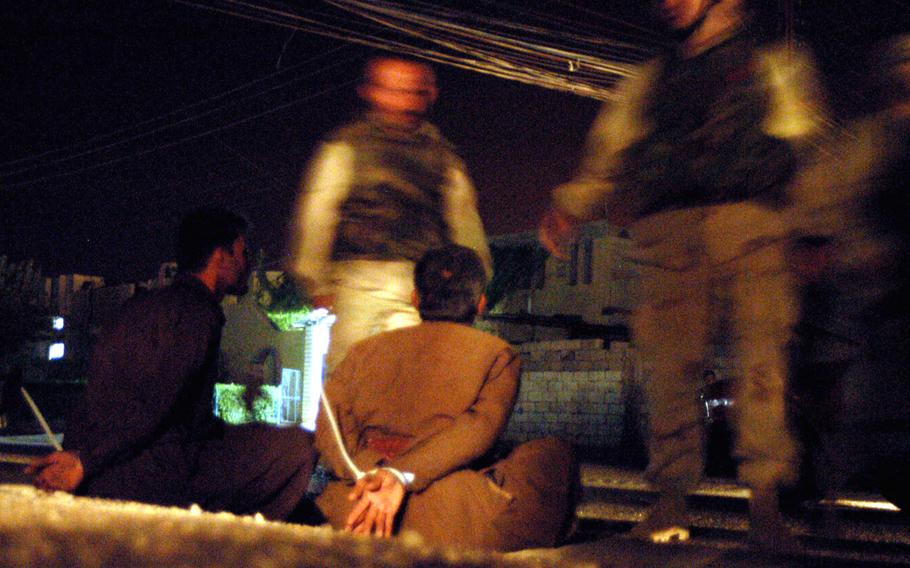 Two men arrested at a checkpoint are questioned after a 173rd Airborne Brigade soldier was wounded by celebratory gunfire in Kirkuk, Iraq, in May 2003. (Michael Abrams/Stars and Stripes) An Iraqi child sleeps while Spc. Jesse LeBlanc of the Black Sheep searches for weapons in a house near Taji, Iraq, in December 2004. (Joseph Giordono/Stars and Stripes) 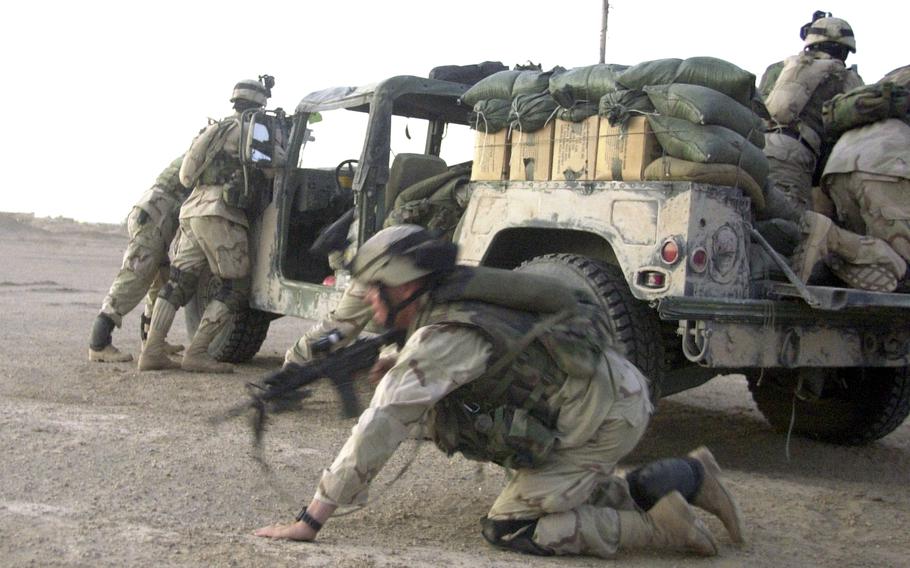 Soldiers near Fallujah scramble into position as rounds come in just minutes after Company B troops left Forward Operating Base Mercury in September 2003. The shooters melted into the night before soldiers could return fire or capture them. (Terry Boyd/Stars and Stripes) Soldiers from Company A, 1st Battalion, 69th Infantry Regiment, conduct a room-to-room search during a patrol of farmhouses near Taji, Iraq, in December 2004. (Joseph Giordono/Stars and Stripes) A Humvee gunner is outlined by the headlights of trailing vehicles as a convoy rolls through Baghdad at 3 a.m., on its way to a raid south of the city in October 2003. Soldiers often work around the clock in what they call the Three-Block War. (Terry Boyd/Stars and Stripes) Medics wheel an injured soldier, just unloaded from a Black Hawk medevac helicopter, into the 212th Mobile Army Surgical Hospital during a sandstorm in central Iraq in April 2003. (Steve Liewer/Stars and Stripes) 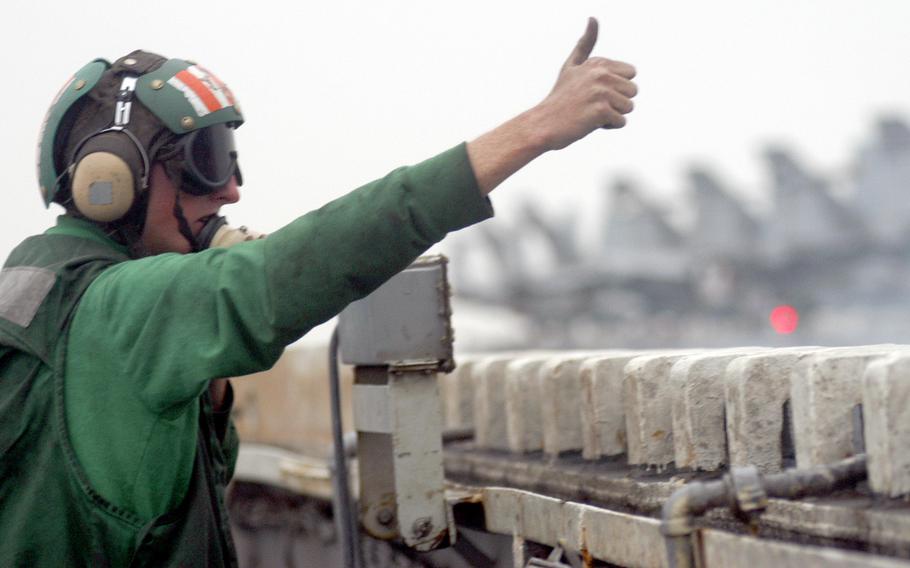 Petty Officer 2nd Class Eric Klostermann, an aviation boatswain's equipment mate, gives the thumbs-up for an aircraft to launch off the USS Kitty Hawk in March 2003. (Kendra Helmer/Stars and Stripes) 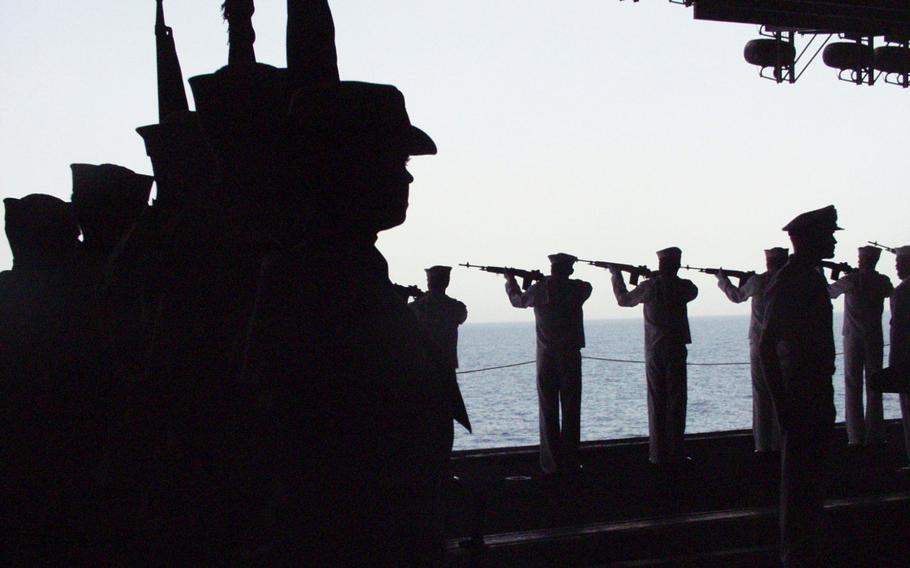 Members of an honor guard, left, stand as sailors fire a 21-gun salute during an April 2003 memorial service aboard the USS Kitty Hawk for Lt. Nathan “O.J.” White, a Carrier Air Wing 5 member killed in combat. (Kendra Helmer/Stars and Stripes) Fifteen sets of helmets, rifles, dog tags and boots are placed in front of a U.S. and Army flag as a memorial to 15 soldiers killed when a Chinook helicopter was shot down Nov. 2, 2003. Hundreds of soldiers and civilians attended the memorial service at al-Asad airbase in Iraq. A 16th soldier died later from his injuries. (Jason Chudy/Stars and Stripes) 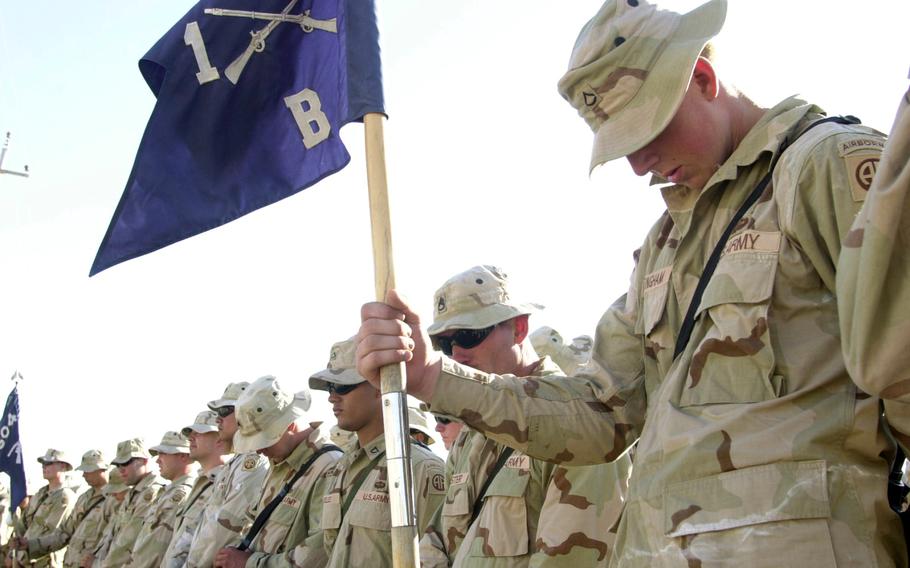 Spc. Nick Moore gives an emotional eulogy in September 2003 for his friend, Spc. Trevor Blumberg, who died during an attack outside Fallujah. (Terry Boyd/Stars and Stripes) 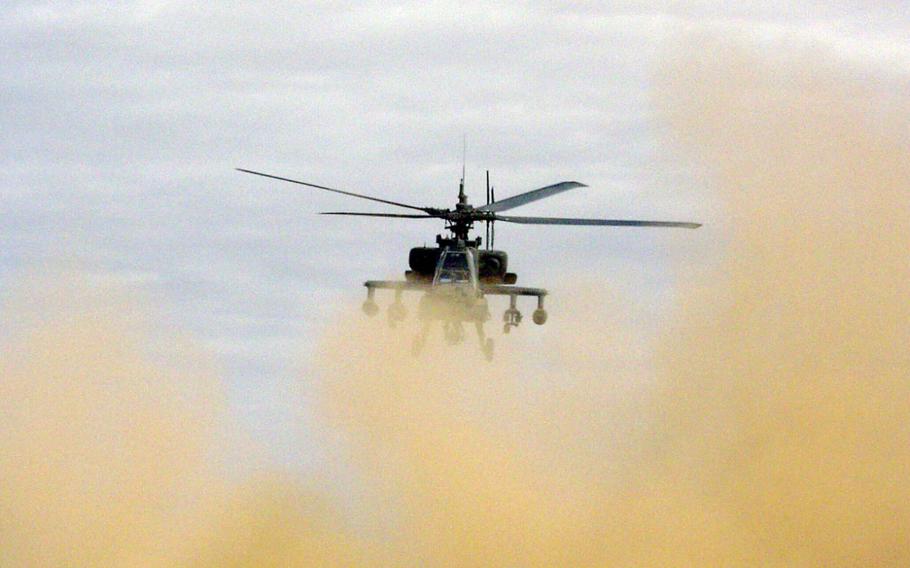 Chief Warrant Officer 3 Tim McCray and Chief Warrant Officer 2 Aaron Mitchell lift their AH-64A Apache off the ground en route to a mission against the former stronghold of the Iraqi Republican Guard's Medina Division, south of Baghdad in April 2003. The pilots are members of the 2nd Squadron, 6th Cavalry Regiment's Troop C. (Steve Liewer/Stars and Stripes) American soldiers and Iraqi police and security forces cordon off the scene of a car bombing near the Baghdad Hotel in October 2003. According to the 1st Armored Division's 1st Brigade commander, Col. Peter Mansoor, a car ran through a checkpoint at the hotel and came under fire. Shortly thereafter, it exploded, killing six Iraqis and wounded at least 10 others, who were taken to local hospitals. One American soldier was slightly wounded and treated at the scene. Small units of soldiers share guard responsibilities at the Baghdad and two other nearby hotels with Iraqi police and protective forces. (Jason Chudy/Stars and Stripes) Smoke billows from the battlefield as American armor vehicles search for targets in Iraq in March, 2003. (Joseph Giordono/Stars and Stripes) 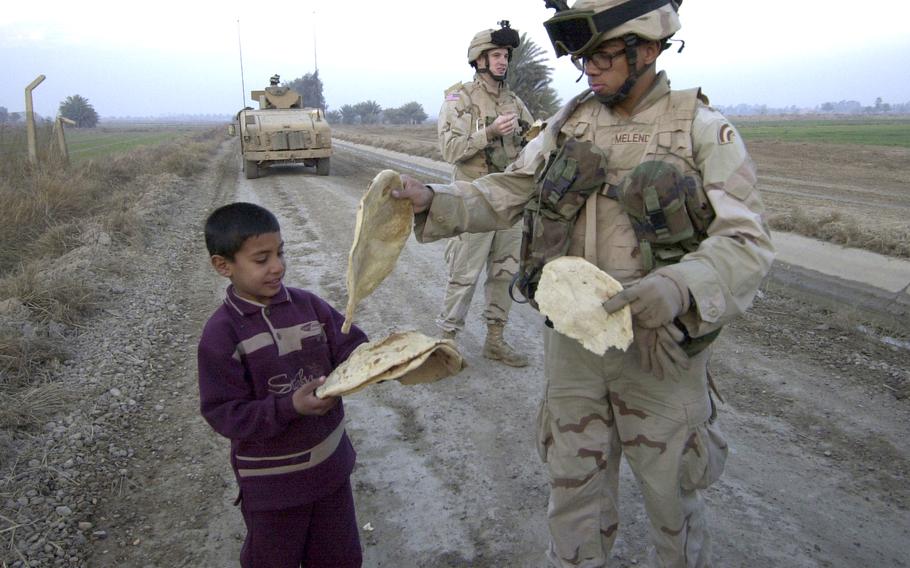 A set of BDUs hang from a second-floor balcony at Saddam Hussein’s abandoned Al Faw Palace on Camp Victory near Baghdad International Airport, Iraq, in October 2003. (Jason Chudy/Stars and Stripes) 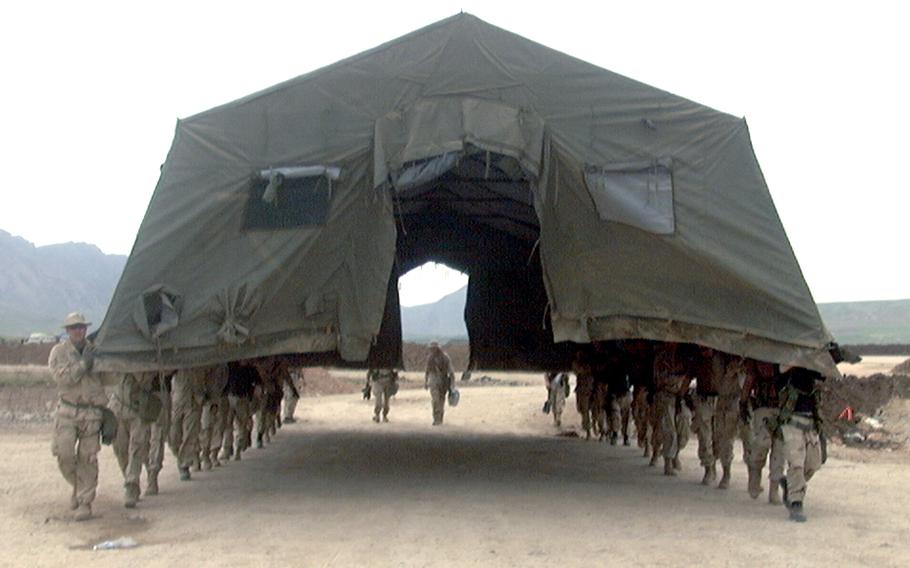 Moving day for the 86th Contingency Response Group: With the Army moving south, the Air Force expeditionary unit seizes some valuable real estate after spending nearly three weeks parked on the edge of the concrete ramp at Bashur Airfield in Iraq in 2003. (Kevin Dougherty/Stars and Stripes)

Early on the morning of March 20, 2003, U.S. jets struck in the Baghdad suburb of Dora in a “decapitation strike” aimed at killing Iraqi President Saddam Hussein. Saddam escaped, and within hours U.S. soldiers and Marines, along with British and other allies, rolled across the border into Iraq.

So began one of America’s most divisive wars, which cost more than 4,400 American lives and left more than 31,000 Americans injured. Troops found no huge stocks of weapons of mass destruction, which was the catalyst for the war. Saddam’s dictatorship was toppled and the Iraqi strongman was himself hanged.

But the years following the invasion have been among the bloodiest and most chaotic in Iraq’s modern history. The war morphed into a civil conflict among the country’s ethnic and religious communities and most recently into bloody fighting with the terror group the Islamic State, which overran a third of the country before it was routed from strongholds in the north and west.

Politically, a weak democratic system established with U.S. patronage has been under siege due to factional conflict and interference from neighboring countries, most notably Iran.