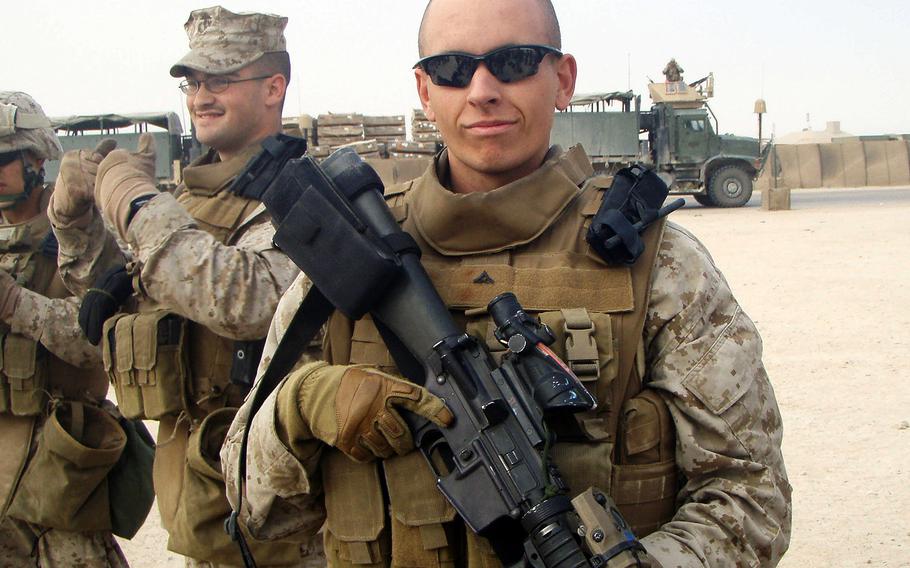 Lance Cpl. Jordan Haerter was posthumously awarded the Navy Cross along with Cpl. Jonathan Yale for their bravery on April 22, 2008 in Ramadi, Iraq. Haerter and Yale stood their ground and stopped a truck carrying 2,000 pounds of explosives. The two Marines died in the blast, but it's estimated that their actions saved the lives of 50 Marines and more Iraqis. (U.S. Marine Corps)

Lance Cpl. Jordan Haerter was posthumously awarded the Navy Cross along with Cpl. Jonathan Yale for their bravery on April 22, 2008 in Ramadi, Iraq. Haerter and Yale stood their ground and stopped a truck carrying 2,000 pounds of explosives. The two Marines died in the blast, but it's estimated that their actions saved the lives of 50 Marines and more Iraqis. (U.S. Marine Corps) 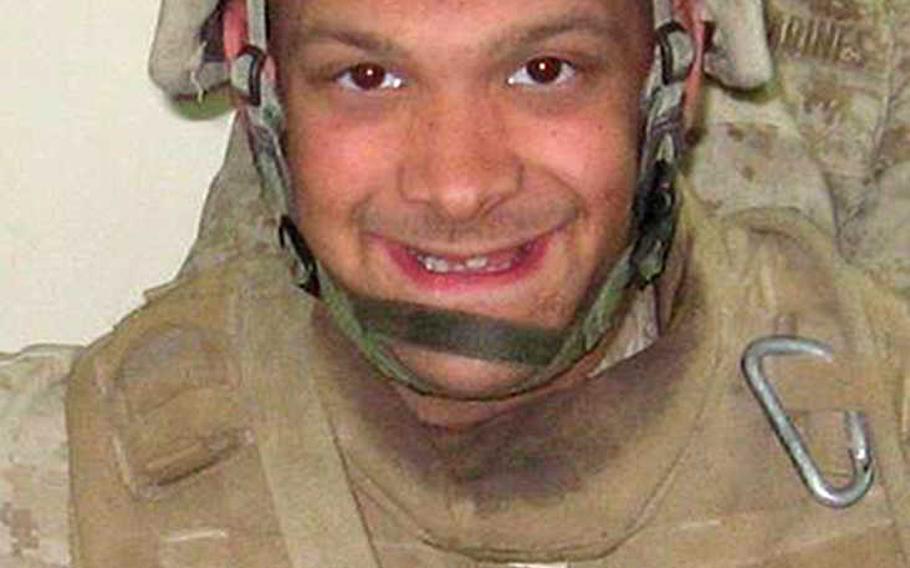 Cpl. Jonathan Yale was posthumously awarded the Navy Cross along with Lance Cpl. Jordan Haerter for their bravery on April 22, 2008 in Ramadi, Iraq. Haerter and Yale stood their ground and stopped a truck carrying 2,000 pounds of explosive. The two Marines died in the blast, but it's estimated that their actions saved the lives of 50 Marines and more Iraqis. ( U.S. Marine Corps) 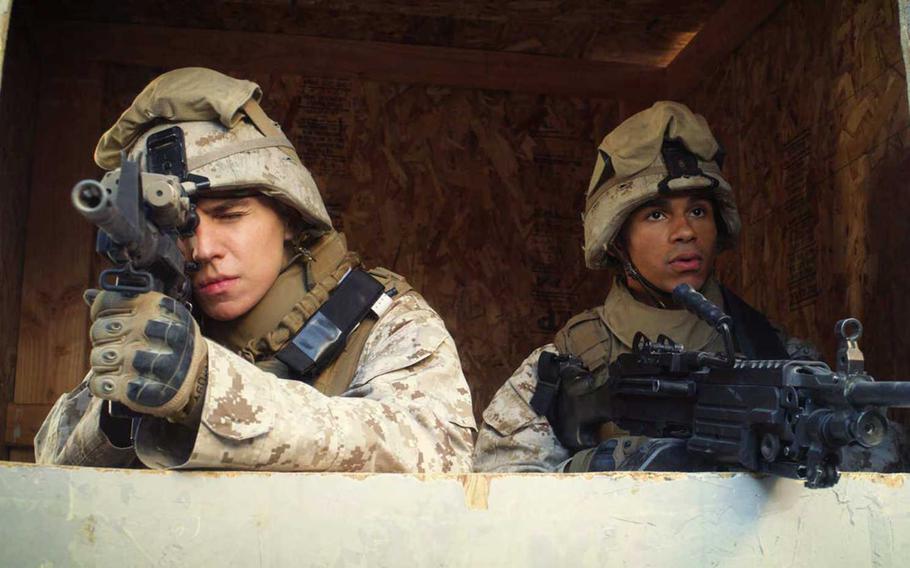 Michael Grant as Lance Cpl. Jordan Haerter, left, and Noah Gray-Cabey as Lance Cpl. Jonathan Yale in a scene from the film ''The 11th Order.'' Yale and Haerter died stopping a bomb-laden truck in Iraq in 2008, saving the lives of many of their comrades. (D4 Film Company) 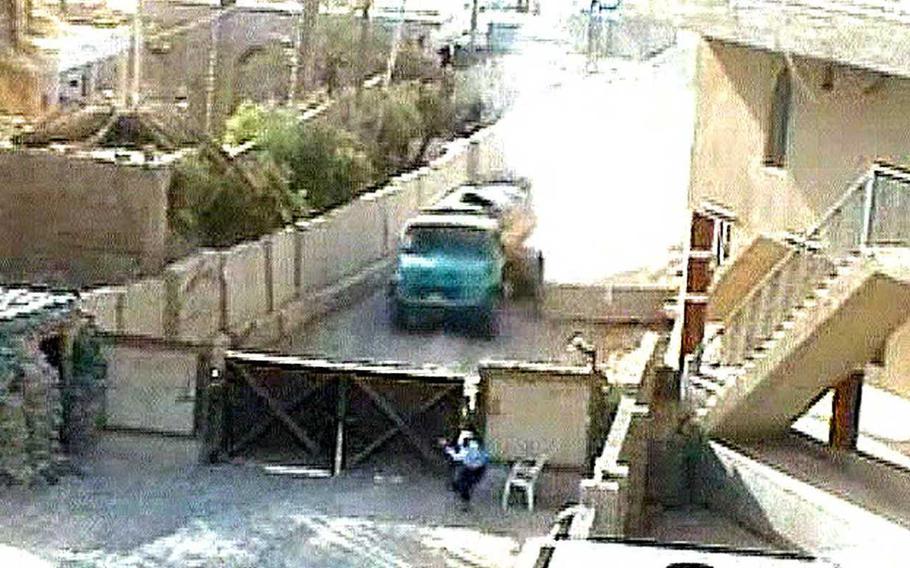 Security footage of a truck loaded with explosives crashing a gate in Iraq in 2008. Marines Cpl. Jonathan Yale and Lance Cpl. Jordan Haerter died stopping the truck, saving the lives of many of their comrades. A new film depicts their heroism. () 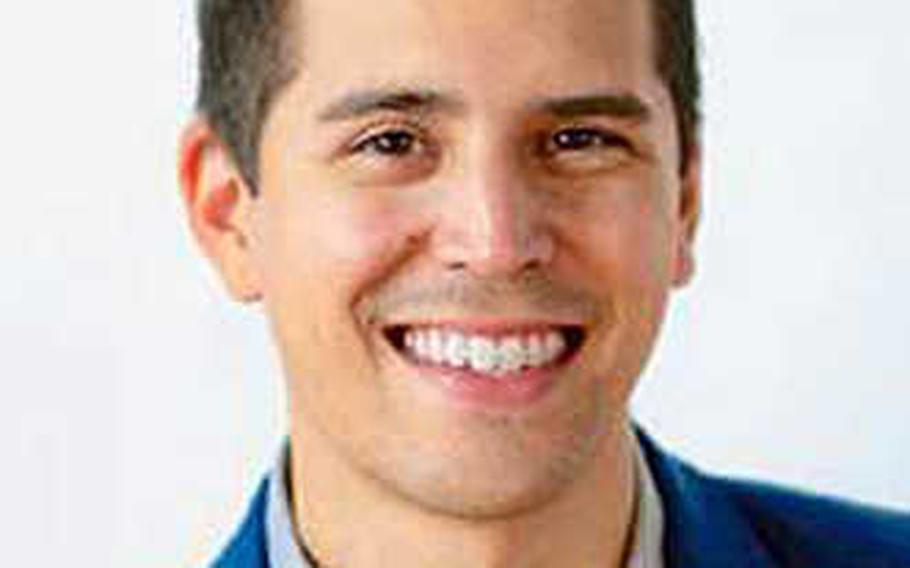 Joshua DeFour, director of the movie ''The 11th Hour,'' which depicts the final moments in the lives of Marines Cpl. Jonathan Yale and Lance Cpl. Jordan Haerter. The Marines died stopping a bomb-laden truck in Iraq in 2008, saving the lives of many of their comrades. (D4 Film Company)

A short film about two Marines’ final acts of heroism to stop a truck bomb suicide attack in Iraq became free to view this week on the 13th anniversary of the incident, for which the two men earned Navy Cross medals.

“The 11th Order,” directed by Marine veteran Joshua DeFour, recreates the events of April 22, 2008, at an outpost in Ramadi where Cpl. Jonathan Yale and Lance Cpl. Jordan Haerter stood their ground to halt an oil truck laden with 2,000 pounds of explosives barreling toward the gates of a compound housing 50 fellow Marines and 100 Iraqi police.

DeFour, who co-wrote, directed and produced the 2019 short for his thesis at the University of Texas film school in Austin, has been touring the film festival circuit with it, garnering awards at a couple. But he felt it wasn’t reaching enough viewers, so he made it public Thursday on Facebook and YouTube.

“We promised the families that we would get their story to a bigger audience,” DeFour said in a phone interview from Iowa, where he was attending the Julien Dubuque Film Festival.

The film, which has been accepted into the Marine Corps Museum archives, was a semifinalist in the 2019 Student Academy Awards and produced with help from the service. It gained backing from the Marine Corps Heritage Foundation and other donors, including executive producer and Marine veteran Michael Goyette.

Haerter and Yale’s story had garnered widespread attention after a November 2010 Marine Corps ball, where then-Gen. John Kelly recounted their final six seconds to a packed house just four days after his own son was killed in Afghanistan.

Kelly was commander of U.S. and Iraqi forces in the country at the time of the 2008 incident. He conducted an inquiry into the two men’s deaths before recommending they receive posthumous Navy Crosses, the nation’s second-highest valor medal.

“Sir, in the name of God, no sane man would have stood there and done what they did,” Kelly said, quoting one of the Iraqi witnesses. “No sane man. They saved us all.”

The two Marines went down fighting, still firing their weapons. More than 100 yards away, three other Marines, eight Iraqi officers and 24 civilians were wounded in the blast. Nearby houses were destroyed, a mosque collapsed and the truck’s engine was found 200 yards away.

The 25-minute film interweaves Kelly’s speech, as portrayed by actor Colin Hoffmeister, with scenes featuring Yale and Haerter, played respectively by Noah Grey-Cabey, of the TV shows “Heroes” and “Pretty Little Liars: The Perfectionists,” and Michael Grant of the “The Secret Life of the American Teenager.”

Some scenes were filmed in Austin and south of Los Angeles at Camp Pendleton. A set in Santa Clarita, Calif., which was used for the feature films “American Sniper” and “Iron Man,” stood in for the Ramadi base.

DeFour credits his fellow film school students with capturing the look and feel of Iraq, even adding in true-to-life details like the Marines’ water bottles of dip spit.

But the most important element was faithfully capturing who Yale and Haerter were, like the fact that 20-year-old Haerter didn’t swear — his is the only dialog that isn’t laced with profanity — and that 22-year-old Yale was a fan of “Dragon Ball Z.”

Much of the film takes place in the guard shack in scenes where DeFour had to fill in the blanks of how the two Marine riflemen from different units would have spent their time before the attack. They’d only recently met when Haerter arrived with 1st Battalion, 9th Marines to replace Yale’s 2nd Battalion, 8th Marines who were going home.

They joke and bond, but the seasoned veteran Yale also teases Haerter for his idealism, sharing a sentiment DeFour said he feels is common among many combat veterans.

“There’s no glory in this, just good friends dying far from home, that’s all,” Yale says in the film. “You’re not here to win a f---ing war.”

Haerter knows why he’s there — he’s “got a job to do” protecting his friends in the compound behind them.

DeFour tried to sidestep politics and war film cliches. “They just stood up for their buddies,” he said.

The men’s mothers had declined earlier requests from others to depict the story, DeFour said. But he got the green light partly because of the nonprofit nature of the production and because he was also a Marine.

The families and friends helped with his research for the script, and Haerter’s mother, JoAnn Lyles, had a fairly active role throughout the production.

But when it came time to premier it to an audience that included both women, DeFour got nervous about how Yale’s mother, Rebecca Yale, would receive it after having less involvement in the production.

He chose to screen it for her and her daughter early, in their hotel room. The ride up to their floor was “one of the most terrifying elevator rides of my life.”

“We kind of all teared up together,” he said. They told him it was like they could see Yale again, which he said was “the greatest compliment.”