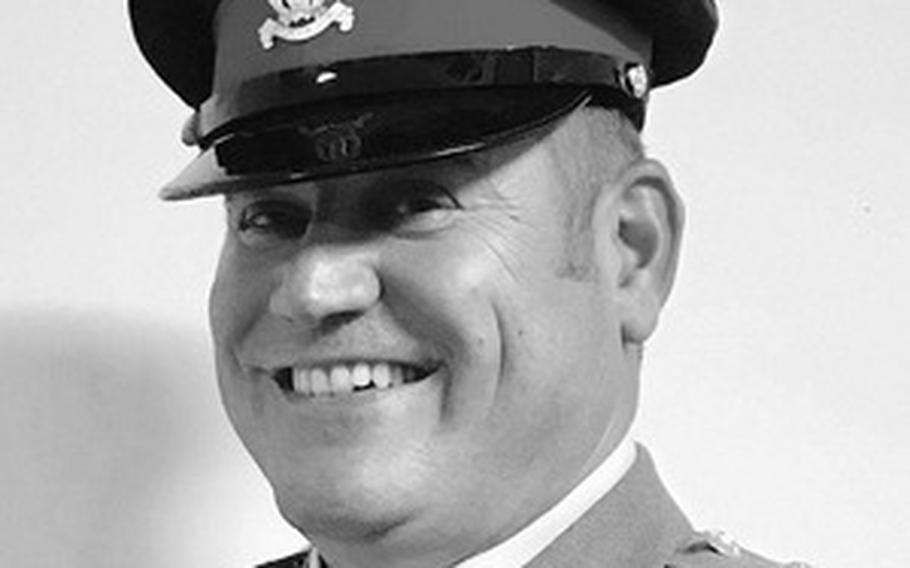 A servicemember who died in an apparent noncombat incident Wednesday while supporting the anti-Islamic State coalition has been identified as a Scottish soldier.

Capt. Dean Sprouting of the Adjutant General’s Corps died at Al Asad Air Base, a joint coalition and Iraqi military compound in Anbar province, west of Baghdad, the British Defense Ministry said in a statement Friday.

“An investigation is underway to establish the detail but it is not a result of enemy activity,” said Minister for the Armed Forces Mark Lancaster, who expressed his sympathies to the man’s family and friends.

Sprouting was serving with Black Watch, 3rd Battalion, Royal Regiment of Scotland. Lt. Col. Rob Hedderwick, the unit’s commanding officer, said the father of two had quickly made himself indispensable.

“His intelligence and sharp wit was apparent from the outset; there was an ever-present twinkle in his eye and he would gladly admit that his youth had been full of adventure,” Hedderwick said in a statement.

The BBC reported that Sprouting joined the military in 1989 and had served in northern Yugoslavia, Cyprus, Kosovo, Sudan, Angola and Germany. He was from Denny, near the town of Falkirk.

“His loss is keenly felt by us all and our thoughts and prayers are with his wife and children whom I know he cherished more than anything else in this world,” Hedderwick said. “I am hugely proud and thankful to have known him.”

“Dean was a tremendously entertaining man to be around,” Millsip said. “He would bring a great deal of joy and laughter to those around him often at the expense of himself — there was never a boring day spent with Dean.”

Citing defense sources, The Times of London reported that a firearm was not believed to have been used and a suicide was not suspected in Sprouting’s death. The incident may have involved a vehicle, the newspaper said.

U.S. Army Col. Ryan Dillon, a spokesman for Operation Inherent Resolve, said in a post on Twitter that the coalition’s thoughts and prayers were with Sprouting’s family, friends and fellow troopers.

Sprouting is the second British soldier to die while supporting the international coalition working to defeat the Islamic State since the campaign began under operation Inherent Resolve in the fall of 2014. In January 2017, Lance Cpl. Scott Hetherington was accidentally shot by a fellow soldier in Iraq.