Senators pursue end to US military's involvement in Yemen war 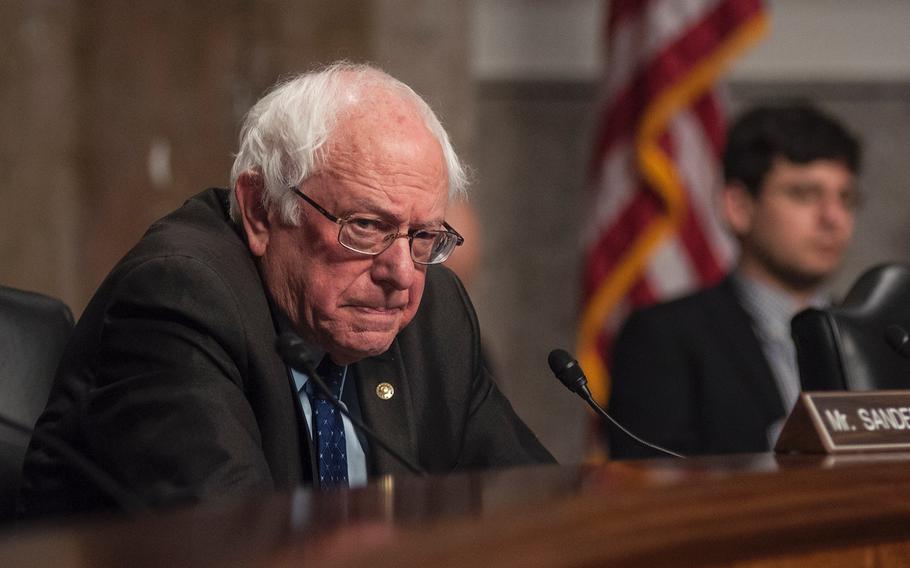 WASHINGTON — A bipartisan group of senators is pursuing a legislative effort that would end the U.S. military role in Yemen.

Sens. Bernie Sanders, I-Vt., Mike Lee, R-Utah, and Chris Murphy, D-Conn., introduced a resolution this week that they say could force a vote on the matter for the first time.

U.S. forces have provided support for Saudi Arabia and the Yemen government in their fight against Iran-backed Houthi rebels, which the lawmakers contend the military has not been given proper authority to do.

“We believe that, as Congress has not declared war or authorized military force in this conflict, the United States involvement in Yemen is unconstitutional and unauthorized, and U.S. military support of the Saudi coalition must end,” Sanders said Wednesday in a statement. “That is why today we are introducing a joint resolution pursuant to the 1973 War Powers Resolution calling for an end to U.S. support for the Saudi war in Yemen.”

The move is part of a growing wave of concern over what some lawmakers say are outdated war powers for the president’s authority to use military force, or AUMF. But the efforts to repeal the existing war powers have faced plenty of opposition, which now includes President Donald Trump’s administration.

With Yemen, the Pentagon’s acting general counsel issued a statement pushing back on the legislative effort a day before it was announced.

On Thursday, Pentagon spokeswoman Dana White declined to comment directly on the pending legislation, but reiterated U.S. forces have the necessary authorization to remain in Yemen.

The forces are coordinating, refueling and providing targeting guidance and intelligence to the Saudi-led coalition in Yemen.

“Our mission is two parts, it’s counterterrorism, which we feel we have the authority to conduct that mission under our current AUMF,” White said, and the other mission is supporting Saudi Arabia, which “has been attacked in Yemen by Iran-backed Houthis who have fired missiles and targeted civilian facilities.”

The current war powers were issued in response to the 9/11 terrorist attacks in 2001 and 2002 when the United States went to war in Afghanistan and Iraq. The AUMFs gave the president wide-ranging authority to direct the military to fight terrorist groups such as al-Qaida, the Taliban and Islamic State around the world.

Since that time, the military has operated under those war powers in more than a dozen countries.

In 2015, former President Barack Obama’s administration deployed U.S. forces to provide logistical and intelligence support to the Saudi coalition in Yemen, which continues to this day, Sanders, Lee and Murphy said in a joint statement.

At the end of his presidency, Obama approved a raid on an al-Qaida compound in Yemen’s Al Bayda province. But it didn’t take place until the first month into Trump’s administration. The deadly encounter left dead a Navy SEAL and killed an estimated two dozen civilians.

“Every strike advances the defeat of violent extremist organizations, and protects the United States and partner nations from attack at home and abroad,” Army Lt. Col. Earl Brown, a U.S. Central Command spokesman, said in a statement last month.

However, any participation in Saudi coalition hostilities against the Houthis hasn’t been explicitly authorized by Congress, the lawmakers argued. Under the War Powers Resolution of 1973, the U.S. military action in Yemen constitutes participation in the conflict, they added.

The Senate effort will be referred to the Senate Foreign Relations Committee and is guaranteed a vote under the International Security and Arms Export Control Act of 1976, they said.

“With this resolution, Congress can re-assert power over foreign policy decision-making,” Lee said. "It can authorize – or decline to authorize – military engagement and define U.S. national interests."

Last year, an hourslong debate to repeal the current war powers was led by Sen. Rand Paul, R-Ky., and held up a Senate vote for the 2018 National Defense Authorization Act. The Senate Foreign Relations Committee has also flirted with a new war powers proposal in several hearings.

However, none of those efforts have resulted in a direct vote on the war powers.

House members in November voted through a resolution that declared the Yemen effort unauthorized.

As a result of the Saudi-led war, a child younger than the age of five in Yemen dies of preventable causes every 10 minutes, the senators said in arguing for the resolution. More than 10,000 have died and more than 40,000 have been wounded as access to food, clean water and sanitation deteriorates.

“Thousands and thousands of innocent civilians inside Yemen today are dying, and the United States is complicit," Murphy said. "This horror is caused in part by our decision to facilitate a bombing campaign that is murdering children, and to endorse a Saudi strategy inside Yemen that is deliberately using disease and starvation and the withdrawal of humanitarian support as a tactic. There is no legal authorization for the United States to be part of a war inside Yemen, and Congress cannot continue to be silent."