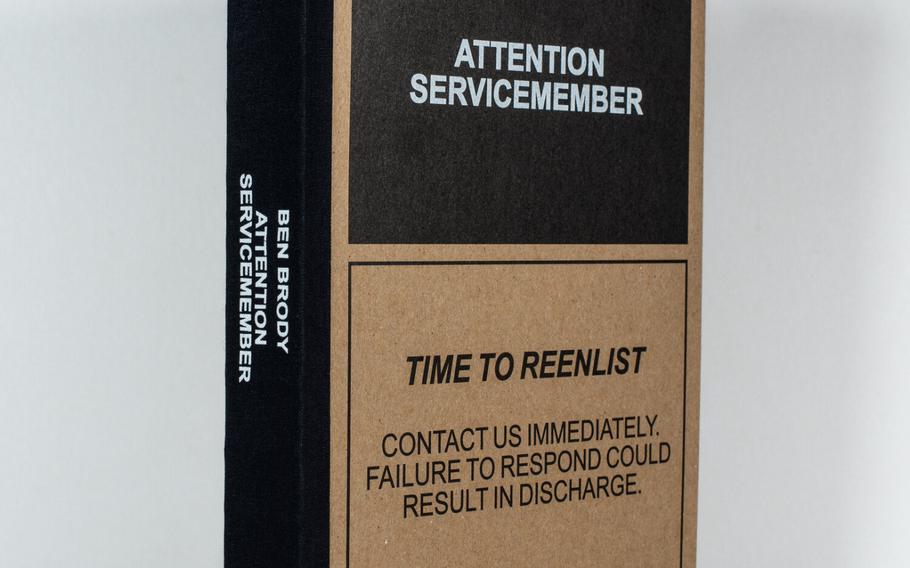 "Attention Servicemember," a book by U.S. Army war veteran Ben Brody, attempts to convey the experience of the Iraq and Afghanistan Wars via photography. (Ben Brody)

"Attention Servicemember," a book by U.S. Army war veteran Ben Brody, attempts to convey the experience of the Iraq and Afghanistan Wars via photography. (Ben Brody) 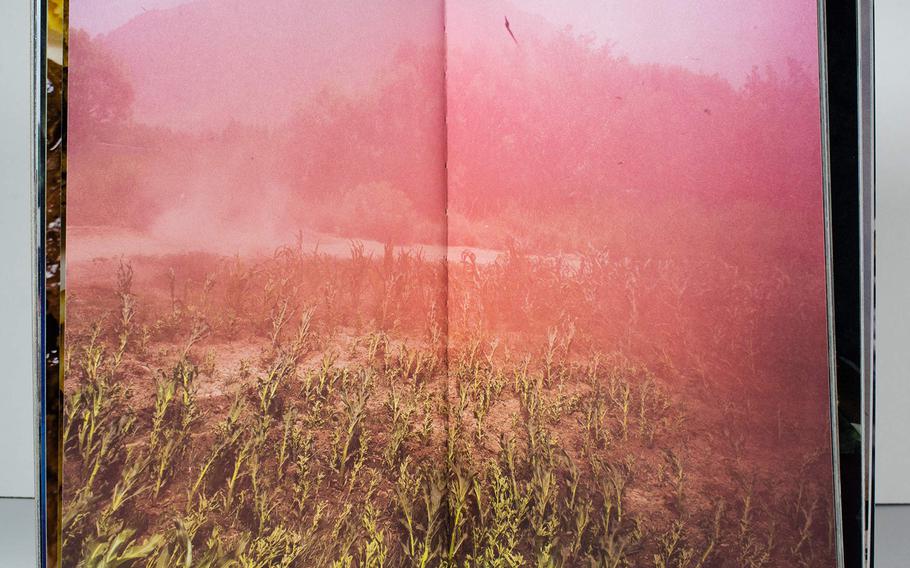 Smoke obscures a field in "Attention Servicemember," by U.S. Army war veteran Ben Brody, a book that attempts to convey the experience of the Iraq and Afghanistan Wars via photography. (Ben Brody) 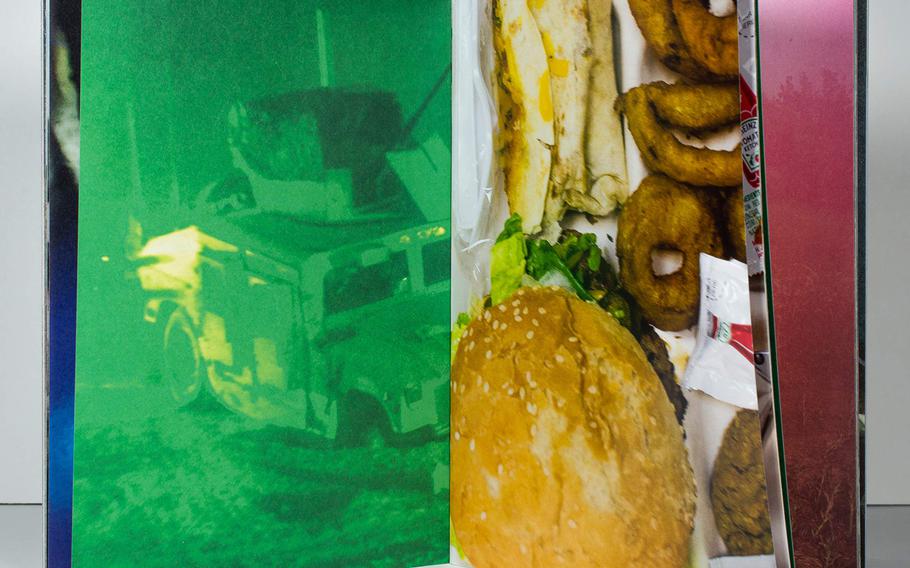 Photos of Humvees at night and cafeteria lunches are among the photos of deployed life in "Attention Servicemember," a book by U.S. Army war veteran Ben Brody. (Ben Brody) 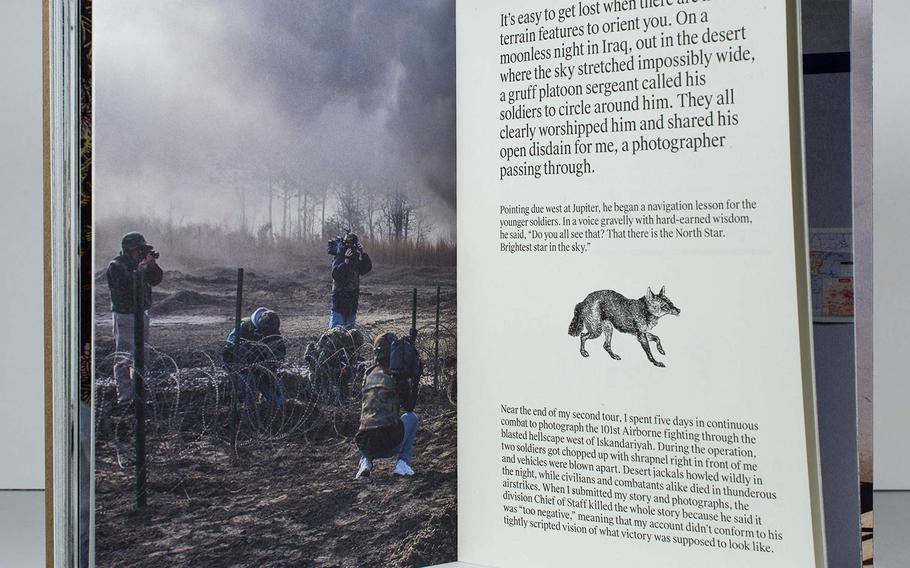 "Attention Servicemember," by U.S. Army war veteran Ben Brody, alternates essays and photos from his two combat tours in Iraq and his coverage of fighting in Afghanistan as a civilian reporter. (Ben Brody)

Veterans of the wars in Iraq and Afghanistan have often told me that they struggle to make sense of their time fighting in conflicts marked by ambiguity and lacking clear endings.

In his photo book, “Attention Servicemember,” Army veteran Ben Brody attempts to make sense of his experience during America’s almost 20-year-old war on terrorism by forgoing traditional narrative tools like heroes and villains or victory and defeat.

The book, which received a second printing this fall, alternates essays and photos from Brody’s two combat tours in Iraq as an Army public affairs soldier and his coverage of fighting in Afghanistan as a civilian reporter.

Looking through the photos is a bit like picking up jumbled puzzle pieces one at a time. One page shows fighters storming a house. The next, a deployed soldier shops for jewelry on base, as if in a mall. Troops lounge on cots, sleep on duffel bags. A dead body lies beneath a tarp. A soldier plays with a cat. A horse bashes its head against its enclosure.

None of these photos seem to be in any logical order. Nor do any of the photos have captions. Very little is explained, except via the essays interspersed within the imagery.

The effect is bewildering at first, reminiscent of the nonlinear narratives of war novels such as “Catch-22” by Joseph Heller or “Slaughterhouse-Five” by Kurt Vonnegut.

By not offering easy answers, the book prompts the reader to ask their own questions. The longer one looks at his pictures, the more the intrinsic weirdness of each frame comes into focus, prompting thoughts such as, “How old is that child they’re searching for bombs?”

Brody in a phone call said he wanted readers to understand how his experiences with war were bizarre, absurd and often without explanation.

“The reason there are no captions,” Brody said, “is it's more up to you to process what the pictures are about, because I wanted to convey how disorienting war is, and the effect that it has on you as a person.”

This is the opposite of the work Brody used to do, which was to provide photography that communicated the desired messages of the U.S. military as clearly as possible.

Looking back, Brody calls himself a propagandist, alluding to the job he did as a public affairs soldier. Brody said he quickly learned what pictures his bosses wanted: soldiers looking calm and heroic, with captions that proclaim with certainty that objectives were being met and wars were being won.

These photos were generic enough that Brody said one of his war pictures was used to sell vape pens.

The photos that didn’t fit the official narrative or were confusing got discarded, even though Brody, looking back, said the confusing moments most exemplified the lives of soldiers downrange.

“Attention Servicemember” is a reminder that what really sticks out to a lot of veterans are the strangest moments of war. They’re moments like realizing soldiers were risking their lives to deliver ice cream machines, or that sand was being imported into Iraq for a volleyball court.

Another war photographer, Christoph Bangert, said the absurdities are aspects of war that often get edited out of public view.

Bangert, like Brody, published his works of photography to go beyond showing heroic military figures and suffering victims. His 2016 book, “Hello Camel,” shares with “Attention Servicemember” the same strangeness: camels peeking over walls at soldiers, cakes being cut with swords.

“War is something extremely confusing and surprising, and there are many more layers in these events than we realize,” Bangert told me in 2016. “But we want things to be simple, and what has happened in the last 15 years is we have oversimplified complicated events.”

One wonders how the wars in Iraq and Afghanistan would have gone had there been more examination of these moments when things didn’t quite seem to add up, and less listening to the dictation of official narratives that were so certain and yet so often wrong.

Today, Brody directs photography at the Ground Truth Project, where he trains early-career journalists, including several veterans. He said he hopes viewers see honesty in his work, but he acknowledged war photography is a crowded market.

“When people look at these photographs of some war, these pictures people have gone to extreme personal risk to make, it’s just like they hear static,” Brody said, “because they all look the same, they all say the same thing.”

But his book rises above the noise to tell a story of its own.

“Attention Servicemember” is available at Brody's website, photobrody.com, and Amazon. Outside of North America, it can be found at Idea Books, online at ideabooks.nl.