Retraining Iraq's fractured army: Will it work this time? 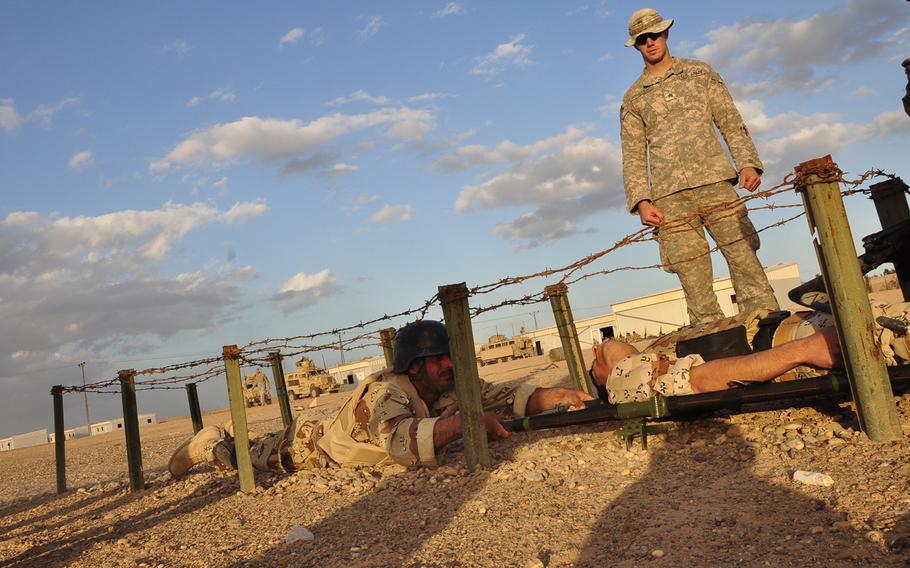 Sgt. William Winstead watches Iraqi soldiers crawl under barbed wire while hauling a soldier, playing an injury victim, on a litter at Camp Fallujah, Iraq, on Jan. 19, 2010. The Iraqi soldiers were participating in a timed obstacle course as part of their training in combat first aid. (Stars and Stripes)

Sgt. William Winstead watches Iraqi soldiers crawl under barbed wire while hauling a soldier, playing an injury victim, on a litter at Camp Fallujah, Iraq, on Jan. 19, 2010. The Iraqi soldiers were participating in a timed obstacle course as part of their training in combat first aid. (Stars and Stripes) 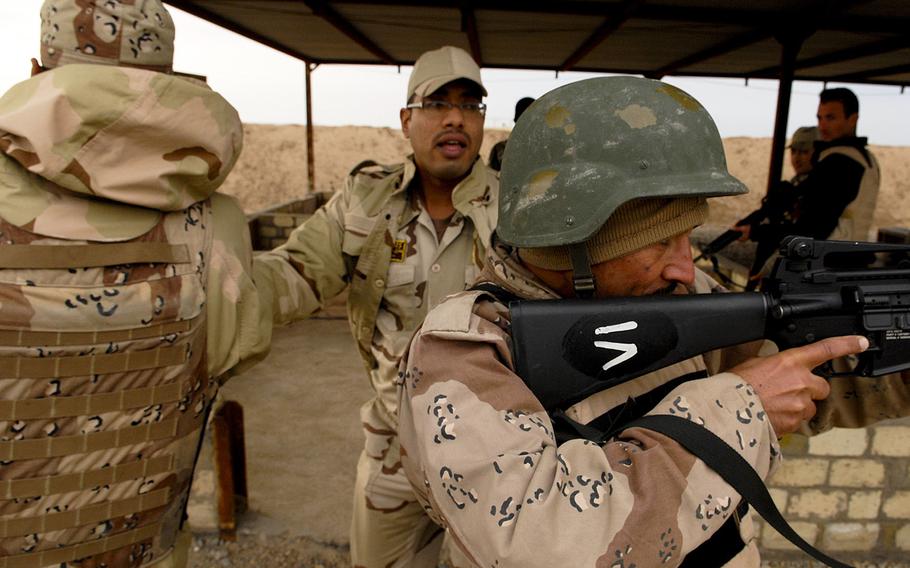 Arif Akil Salma, an Iraqi Army trainer, leads a course in building clearance at the Besmaya Training Center on Dec. 17, 2009. Much of the training at the American-funded center was led by an Iraqi cadre of some 800 soldiers. Sixty civilian contractors and 21 American military advisers also worked at the center. (Stars and Stripes) 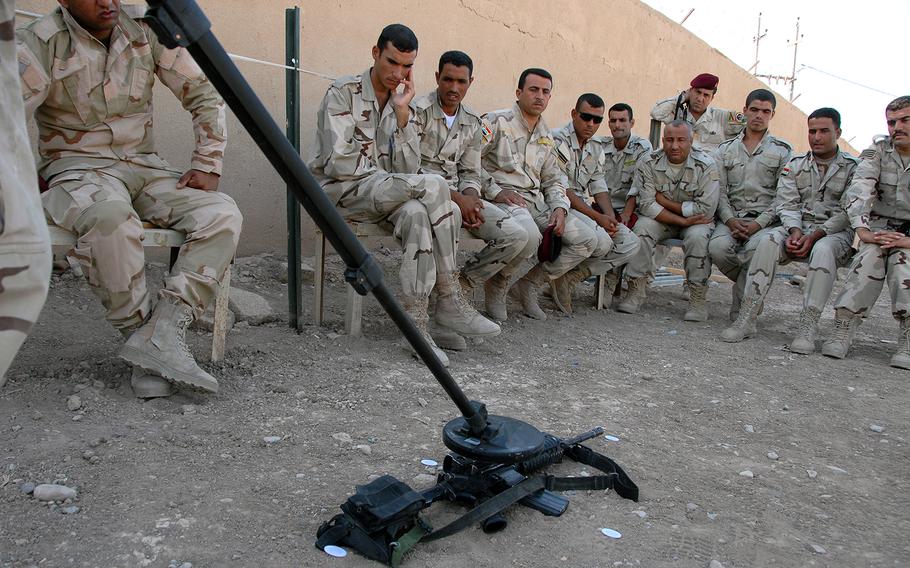 Soldiers with the 5th Iraqi Army Division in Diyala watch as one of their own shows how to use a metal detector to scan for hidden bombs and caches on Sept. 7, 2010. (Stars and Stripes) 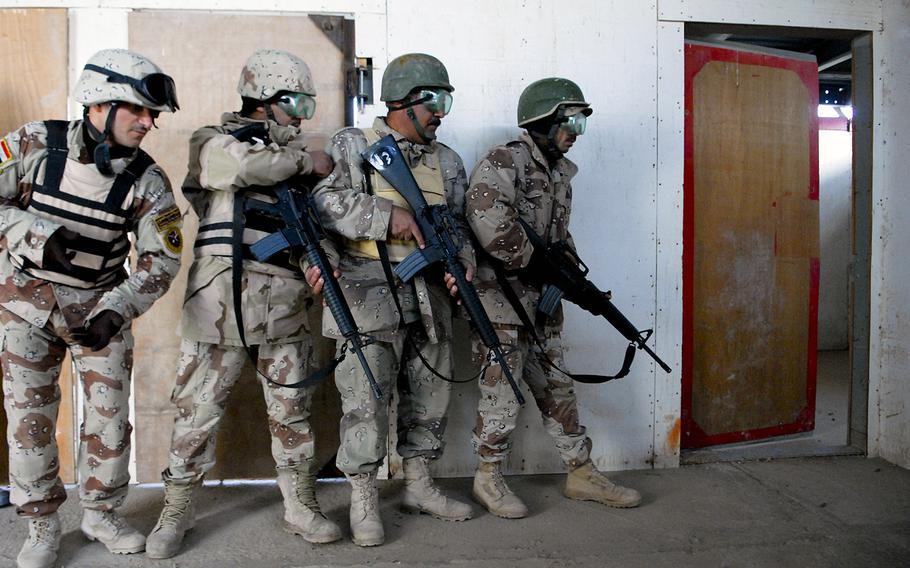 A squad of Iraqi soldiers clears a building during an exercise at the Besmaya Training Center on Dec. 17, 2009. Housed at a former Republican Guard complex, the center included 26 weapons ranges, M1A1 tank training and a bomb disposal school. (Stars and Stripes) 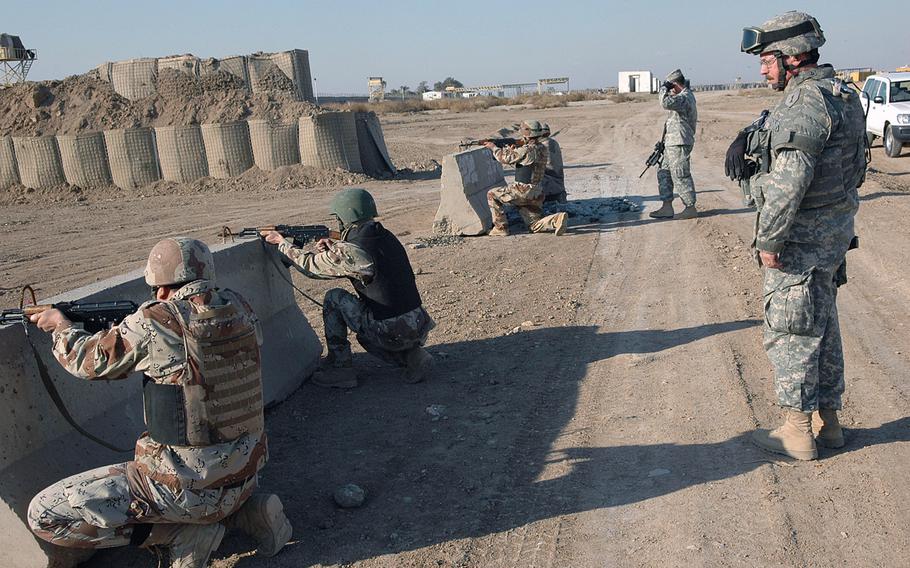 WASHINGTON — As American troops prepared to leave Iraq in December 2011, the former head of the military training mission there, Lt. Gen. Frank Helmick, had this to say about the Iraqi Security Forces:

“My gut tells me they will be capable to do this — they are doing it today,” Helmick said. “Yet to be determined, longer term.”

An eight-year, $25 billion effort to reorganize, train and equip Iraq’s military now seems all for naught — undermined by corruption and sectarian divisions.

Now, the U.S. is starting from scratch with a new mission to urgently revamp the Iraqi military in hopes it can roll back the militant group that calls itself Islamic State, also known as ISIS or ISIL.

Many politicians and experts say the U.S. has little choice but to try to salvage the Iraqi military. Yet some current and former U.S. military officers involved in the effort to stand up an Iraqi force wonder whether the new effort will succeed where the first one failed.

One senior Army officer, who served as a battalion-level trainer for the Iraqi army, said fixing deep problems within the Iraqi army’s leadership would take years and do little to combat the Islamic State in the short term.

“We just left in December 2011, so it’s not even three years later,” said the officer, who asked to remain anonymous because he is still in the military and fears reprisals. “So, if all this effort didn’t even make them capable of standing and fighting, why do we think it’s going to matter if we send a handful of advisers over now?”

Many involved in the last training mission blame former Prime Minister Nouri al-Maliki — who took power with U.S. backing — for turning the military into what many now see as little more than a Shiite-dominated militia.

Maliki’s policies, which put many commanders in place more for their political loyalties than military acumen, alienated the country’s Sunni minority and helped set the stage for the Islamic State, a Sunni group, to take over towns populated by disaffected Sunnis with little resistance.

Retired Army Maj. Gen. Paul Eaton, who oversaw training of the Iraqi forces in the early days of the Iraq War, said that after the U.S invasion in 2003, American trainers tried to construct a military that was representative of the religious and ethnic makeup of a country where hostilities between Sunni and Shiite Muslims as well as Kurds and Arabs run deep.

Eaton and others involved in that training program say Maliki, a Shiite hardliner, started undoing the process as soon as U.S. troops withdrew from the country at the end of 2011.

In order to address sectarian concerns, the U.S. plans to stand up National Guard units made up of Sunni tribesmen to operate in largely Sunni areas.

It’s an idea with echoes of a similar program used to help bring Iraq out of a bloody civil war that engulfed the country between 2006 and 2008. That idea, known as the Awakening movement, involved paying Sunni tribesmen to turn against insurgents.

Unlike the proposed National Guard, Awakening units were never integrated into the Iraqi military because Maliki didn’t trust them.

“The Iraqi army can be a nationalizing force — although some units are predominantly Sunni and others are predominantly Shia, they all fight for Iraq,” said retired U.S. Army Col. Peter Mansoor, a brigade commander during the Iraq War. “I think it’s really critical to make sure that ethic is instituted in the Iraqi military, and any identity with militias or other groups is squeezed out.”

Mansoor said that early on in the Iraq War, the U.S. did not always pick the best officers to lead training and did not instill enough of a meritocracy in the Iraqi ranks, mistakes he said the U.S. must avoid this time around.

But with the Islamic State making advances and the Iraqi army so far unable to beat them back, experts say time is running out for increased foreign military help to make a difference.

“There’s a window here where the new government can make some strides if it takes the central messages to heart and makes some real reforms,” said Kathleen Hicks, the director of the International Security Program at the Center for Strategic and International Studies. “If that window closes … I think that’s a real risk for us, because we can’t train and equip a sectarian force that doesn’t have support from the population.”

‘Whatever you destroy will be rebuilt’

Some have deep misgivings about trying to repeat a program that offered little lasting benefit. Their fears have heightened after reports that government-aligned Shiite militia members have been targeting Sunni villagers in Islamic State strongholds, even beheading some in a grim adoption of Islamic State tactics.

Retired Army Col. Douglas Macgregor said any training and equipping mission will accomplish nothing as long as Sunni Muslim countries allied with the U.S. continue to surreptitiously fund the Islamic State.

“You’ve got recruiting stations and cash outlets supporting ISIS inside Turkey, Saudi Arabia and Qatar,” he said. “As long as they exist, even if you kill 10,000 or 20,000 ISIS people inside Iraq and Syria … and you ignore the recruiting and cash outlets in these countries, whatever you destroy will be rebuilt and return.”

The other part of Obama’s train-and-equip plan calls for increased aid to moderate Syrian rebels, who have been battling the forces of President Bashar Assad for more than three years. More recently, the so-called moderates have also been fighting the more hardline rebel groups, including the Islamic State.

In his speech Wednesday night, President Barack Obama said moderate Syrian rebels can act as a “counterweight” to the Islamic State.

But moderate forces have been increasingly squeezed out. The so-called Free Syrian Army, on which the U.S. once pinned its hopes to oust Assad, barely exists anymore, said Daniel Seckman, co-founder of the SREO Research Organization, a Turkey-based group that studies the Syrian conflict.

Seckman questioned how much the U.S. can accomplish by sending more help to any rebel factions, noting that even once moderate factions have had to join with Islamists to survive.

“I don’t think the United States has any ‘friend’ inside Syria anymore,” he said.