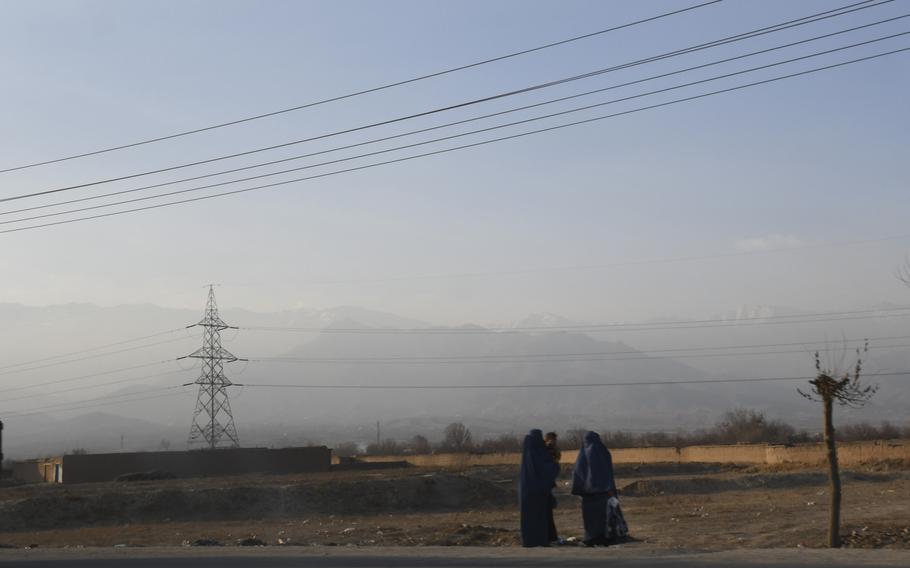 Buy Photo
The United States has funded the construction of high power lines like the ones pictured here on Sunday, Dec. 24, 2017, in Parwan province in the hopes of electrifying Afghanistan and bringing economic development as well as lower costs for powering equipment at the many Afghan military outposts dotting the country's landscape. (Chad Garland/Stars and Stripes)

Buy Photo
The United States has funded the construction of high power lines like the ones pictured here on Sunday, Dec. 24, 2017, in Parwan province in the hopes of electrifying Afghanistan and bringing economic development as well as lower costs for powering equipment at the many Afghan military outposts dotting the country's landscape. (Chad Garland/Stars and Stripes) 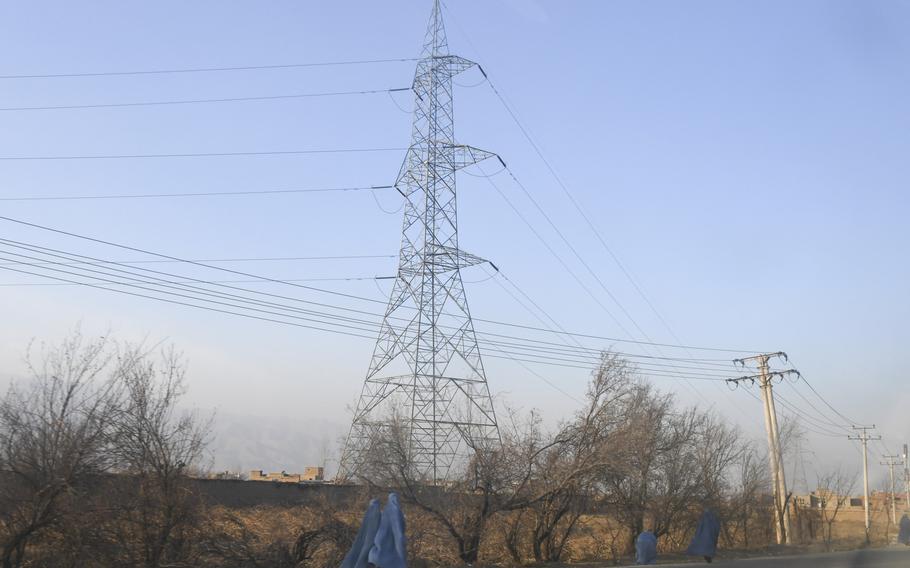 Buy Photo
Afghan women are pictured here on Sunday, Dec. 24, 2017, donning the head-to-toe burqa as they walk along a highway in Parwan province, where power lines have been built under U.S.-funded contracts aimed at bringing economic development for rural areas and cheaper electricity to support outlying military posts. (Chad Garland/Stars and Stripes) 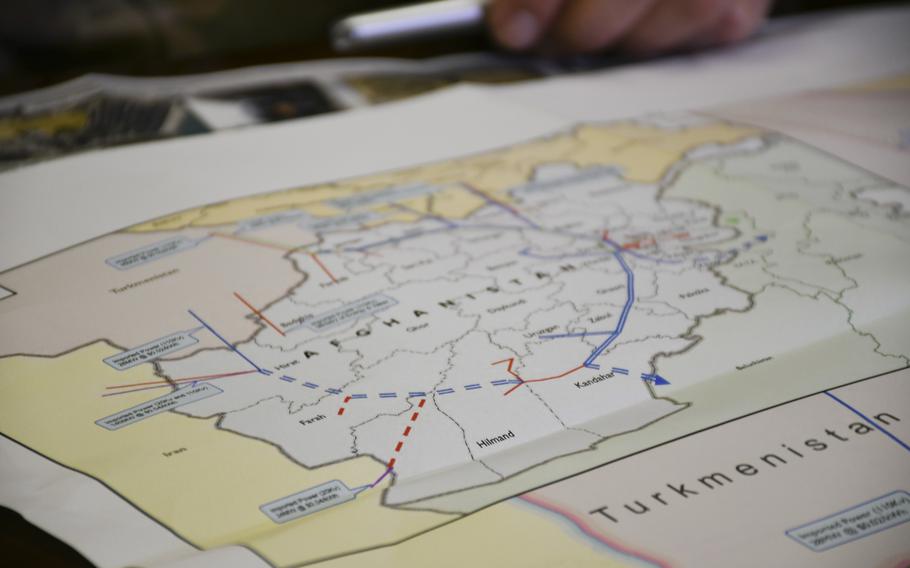 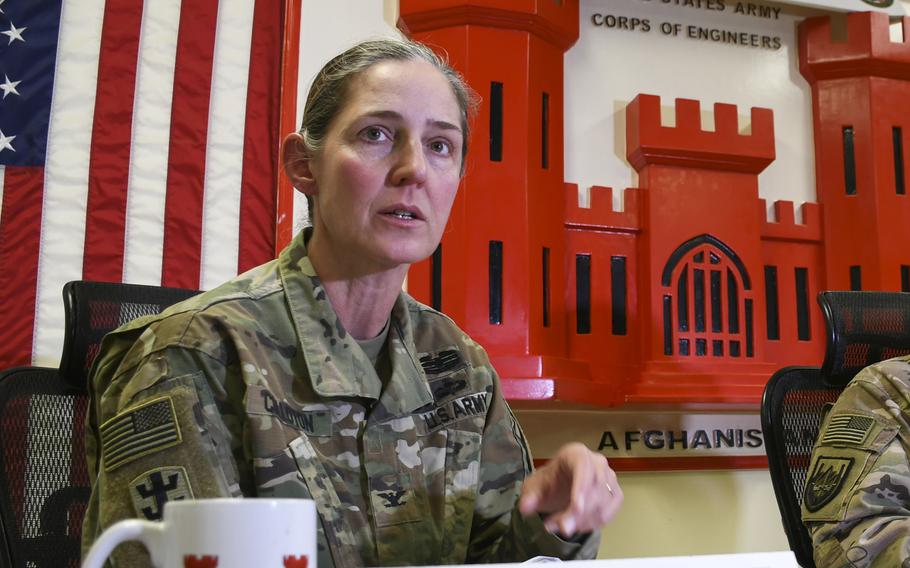 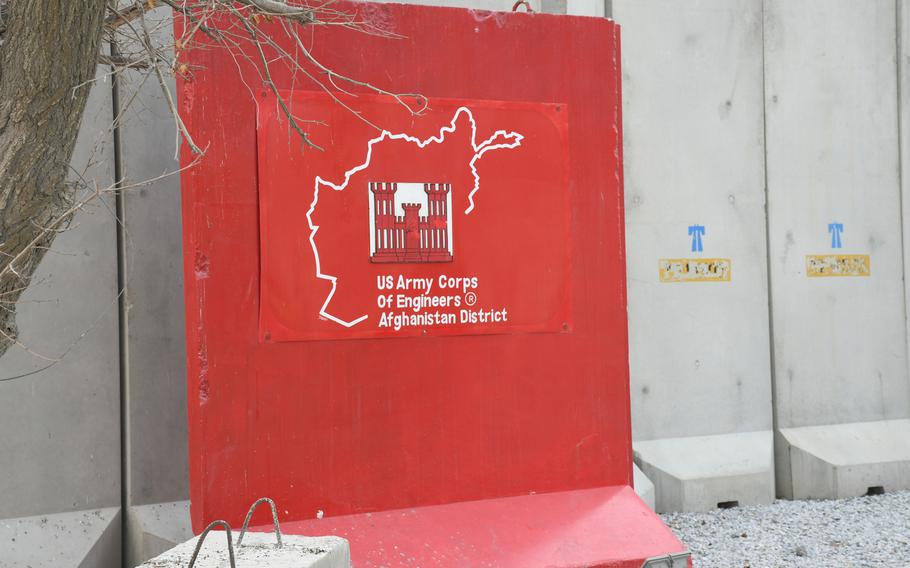 A $60 million power project overseen by the U.S. Army Corps of Engineers in Afghanistan couldn’t be powered up for fear it would put Afghan lives at risk, and shoddy work could leave the system structurally unstable, a government watchdog found.

The third phase in the Corps’ North East Power System project strung high-voltage power lines through 32 miles of Parwan and Kapisa provinces as part of an international effort to build up Afghanistan’s power grid and bring electricity to communities and military installations throughout the beleaguered country.

But when the system was turned over to the Afghan government, residents in some areas were still living and farming on land used for the project, perhaps dangerously close to the transmission towers and high-voltage power lines — in some cases, directly under them — according a review by the Special Inspector General for Afghanistan Reconstruction, published Wednesday.

Inspectors also found what they said were signs of poor workmanship at some of the 18 transmission towers inspected last fall, which the report said could lead to their collapse from crumbling concrete foundations or erosion.

A Corps official at Bagram Air Field said officials reviewed the structural concerns raised in the report and found they do not pose a risk to the system’s long-term operation. Spokeswoman Britney Walker said other issues noted in the report had been resolved and the power would be turned on in seven days.

In an official response included in the SIGAR report, the Corps rejected most of the report’s findings and recommendations — including its title, which accused the Corps of “mismanagement.”

Officials said SIGAR ignored the fact that some features of the power system, such as connecting the third phase of the project to its power source, were supposed to be done by other organizations involved in building out the grid, such as the U.S. Agency for International Development, the Asian Development Bank or the governments of Afghanistan, France or India.

“The SIGAR report appears to suggest that if (the Corps) finished a project before another critical piece of the grid was available, (it) should build the incomplete segment or terminate the contract,” the response said.

Acknowledging the difficulty of completing power projects in the embattled country, where insurgents control, influence or contest more than half of the districts, Walker said officials “are confident the Afghan government can operate these systems safely.”

SIGAR said that the Afghan government failed to acquire the privately owned land that made up two-thirds of the project before the Corps authorized a contractor to start construction.

Concerned the government would “flip the switch” before moving residents from the land, the Corps tasked the contractor with disabling the substation before it was turned over to the Afghan Ministry of Energy and Water in February, SIGAR said.

It could take years and millions in additional funding to establish safe and permanent connections to the two other completed substations, the report said.

Meanwhile, the lines and equipment may be at risk of theft or decay, though Corps officials said the substation is fenced and the transmission towers are designed to be vandal-resistant.

But on Thursday morning, Walker said the Afghan government and electric utility told the Corps that right-of-way issues had been resolved and residents had been relocated safely away from the power lines in the last 30 days, though the Corps "has no way of verifying this information.”

The Corps said in its official response that it was conducting a review to determine why construction went forward before right-of-way issues had been resolved.

Establishing the power grid is just part of the Corps’ work in Afghanistan, where it began managing projects in 1955, said Lt. Gen. Todd Semonite, the Corps’ commander and chief of engineers, during a visit to Bagram in December. About $500 million in projects were under construction and $300 million more were being designed.

During his visit, officials discussed “very aggressive plans” to complete an “arm of power” flexing across Afghanistan, which would bring imported power from neighboring countries to remote provinces from Parwan, home to Bagram, in the north to Kandahar in the south.

Officials believe electrifying the country will spark economic development in areas now largely powerless — an important goal for a country that cannot sustain itself economically without foreign donations.

The grid is also expected to supply power to nearly 100 Afghan military bases dotting the landscape, where the Kabul government, backed by NATO and others, is battling a stubborn insurgency in its 17th year.

The savings could amount to $65 million a year that could be applied to equipment for the security forces, said Semonite, who helped lead efforts to rebuild Iraq’s power grid after the 2003 invasion.

“I saw the benefits of electricity,” he said. “It is good business.”