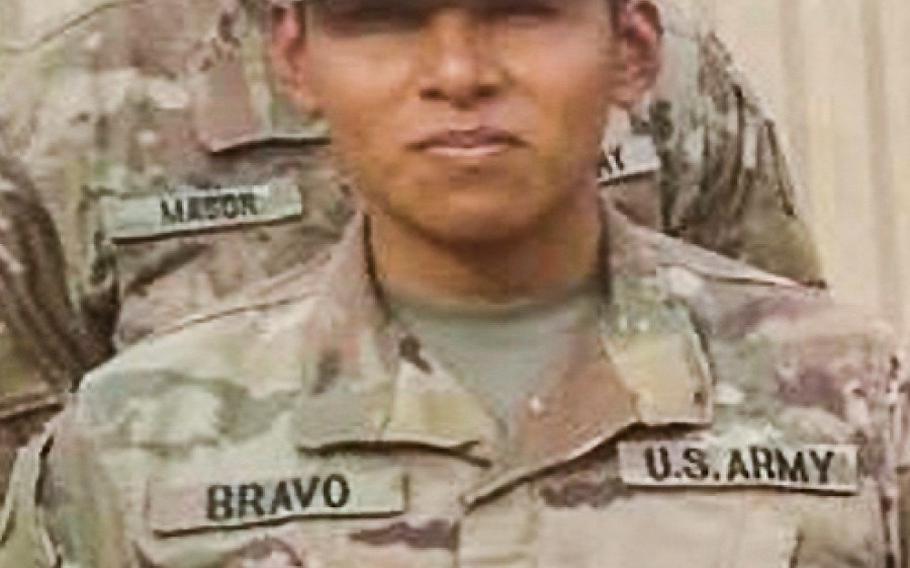 Spc. Nick Bravo-Regules, of Largo, Fla., died June 23 in Jordan of injuries sustained in a noncombat related incident. Bravo-Regules was on his first deployment, in support of Operation Inherent Resolve, which is fighting the Islamic State in Iraq and Syria. (U.S. Army)

Spc. Nick Bravo-Regules, of Largo, Fla., died June 23 in Jordan of injuries sustained in a noncombat related incident. Bravo-Regules was on his first deployment, in support of Operation Inherent Resolve, which is fighting the Islamic State in Iraq and Syria. (U.S. Army) Senior Airman Jason Khai Phan, seen in 2019 as an airman first class, died as a result of noncombat-related injuries while conducting a routine patrol outside the perimeter of Ali Al Salem Air Base, Kuwait, on Sept. 12. He was assigned to the 66th Security Forces Squadron out of Hanscom Air Force Base, Mass. (U.S. Air Force) 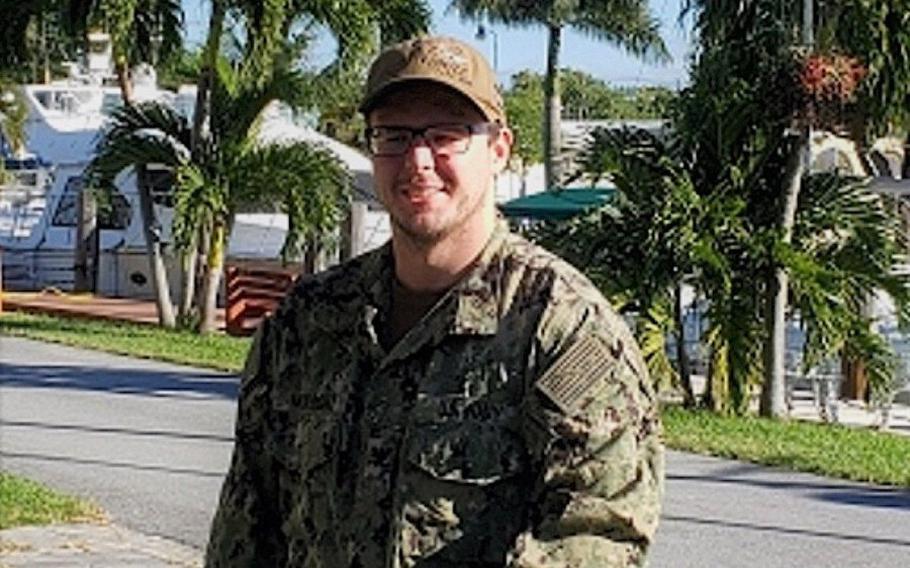 Petty Officer 2nd Class Ian McKnight went overboard from the USS Nimitz as it operated in the North Arabian Sea on Sept. 6. An extensive search for him was called off on Sept. 8. (U.S. Navy) 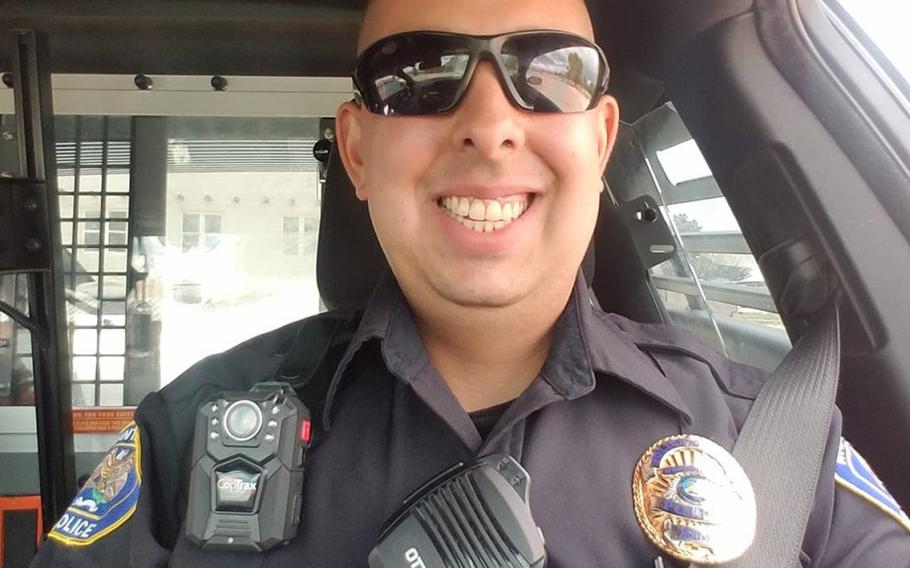 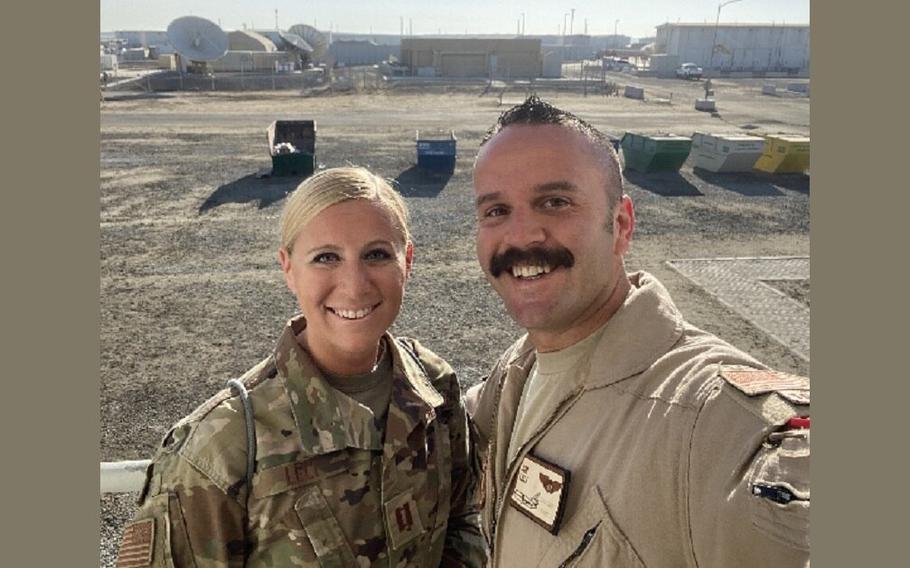 Air Force Capt. Kelliann Leli, left, is shown in an undisclosed location with her husband, Capt. Jimmy Leli, in the last picture of them together. Kelliann Leli, a medical doctor, died Nov. 27 in a noncombat-related vehicle accident at Al Dhafra Air Base, United Arab Emirates. (Jimmy Leli via Air Force) 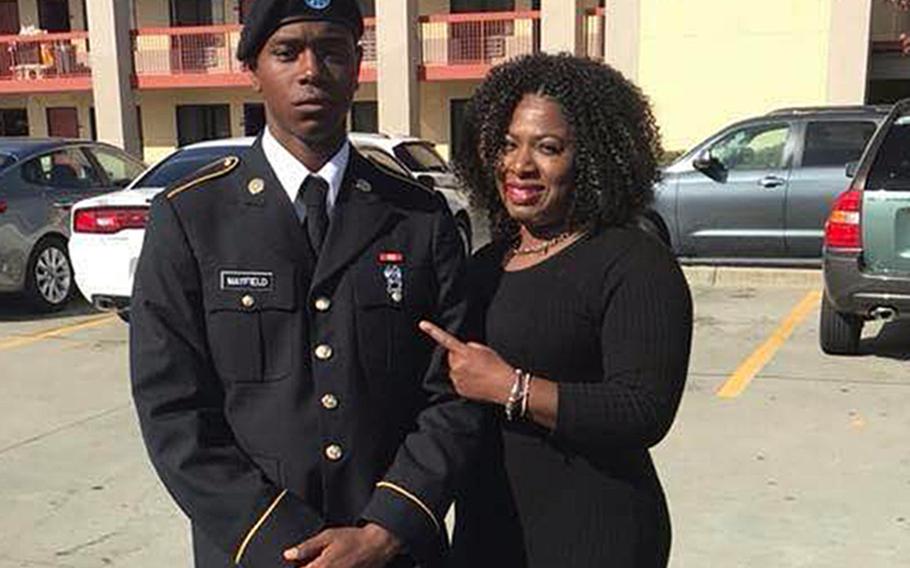 Spc. Henry Mayfield Jr., seen here with his mother Carmoneta Horton-Mayfield, was among three Americans killed on Jan. 5, 2020, at Manda Bay Airfield in southwest Kenya when the base was attacked by insurgents connected to the Somalia-based al-Shabab terrorist group. Defense Department contractors Dustin Harrison, 47, and Bruce Triplett, 64, also died in the attack. (Facebook) 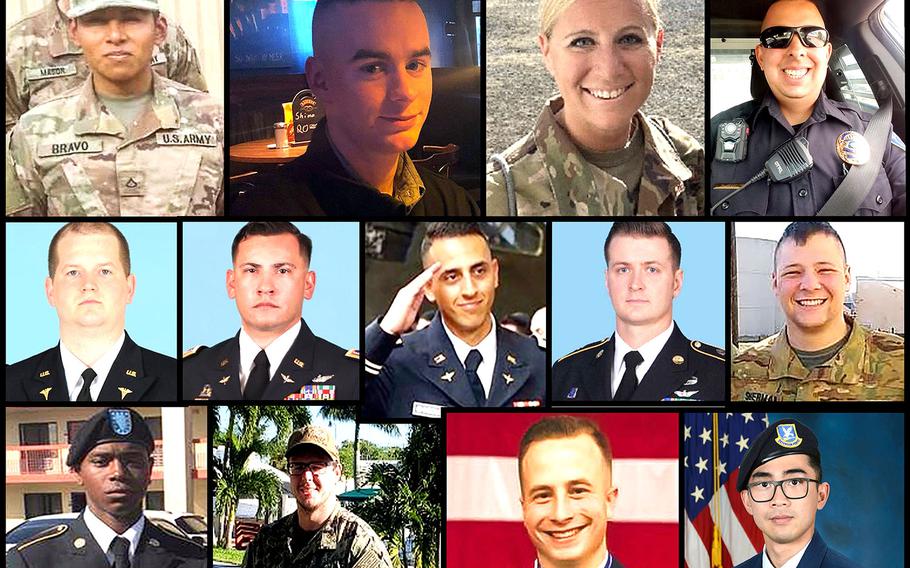 Twelve service members died while serving overseas in designated combat zones in 2020, and one was killed in an attack by militants on a base in Kenya. (Stripes illustration)

Twelve service members died on overseas deployments to designated combat zones in Africa, Kosovo and the Arabian peninsula region, including waterways, in 2020.

One other soldier was killed in a terrorist attack in Kenya, which is not a designated combat zone.

The most deadly of the incidents was a helicopter crash in the Sinai Peninsula in Egypt in November, in which five American troops died and one was injured. The Americans were part of an international peacekeeping force that monitors compliance with the 1979 Israeli-Egyptian peace accord.

He joined the Army in August 2017 and served with the 164th Theater Airfield Operations Group of the Army’s 1st Battalion, 58th Aviation Regiment. Prior to deploying to Kenya, he was stationed at Fort Rucker, Ala.

His death “makes us recognize that we have young men and young women out there sacrificing their lives for the freedom that we enjoy every day,” Vernard Alsberry, mayor of Mayfield’s hometown of Hazel Crest, Ill., said at a memorial event.

Defense Department contractors Dustin Harrison, 47, and Bruce Triplett, 64, were also killed in the attack on the airfield.

He was serving with the 1st Battalion, 200th Infantry Regiment, 93rd Troop Command of the New Mexico Army National Guard, in support of Operation Enduring Freedom-Horn of Africa.

Lewark was also a member of the Mountainair Police Department and a volunteer firefighter.

“You filled me with hope that our younger generations had a peer role model of an authentic man and an authentic American,” his friend Dennis Fulfer said on Facebook.

Lewark was promoted to specialist from private first class after his death by the National Guard.

He was assigned to the 2nd Battalion, 43rd Air Defense Artillery Regiment out of Fort Bliss, Texas, which operates defensive Patriot surface-to-air missile launchers that protect against incoming missiles or airborne threats.

He enlisted in the Army in May 2017 and worked on communications networks for the unit.

Bravo-Regules was on his first deployment, in support of Operation Inherent Resolve, fighting the Islamic State in Iraq and Syria.

He was serving with the Operation Joint Guardian NATO peacekeeping mission in Kosovo and was due to return home in November.

“This is a tragic situation and our primary focus is supporting the family during this difficult time,” Brig. Gen. William J. Prendergast IV, land component commander of the Oregon National Guard, said in a statement at the time.

Ian McKnightNavy Petty Officer 2nd Class Ian McKnight, 29, went overboard from the USS Nimitz as it operated in the North Arabian Sea on Sept. 6. Efforts to locate him were concluded two days later, the Navy said, and he was presumed dead.

McKnight, of North Carolina, enlisted in the Navy in February 2018 and was assigned to the Nimitz the following year. He had been promoted to E-5 in August 2020.

“The strike group team sends our thoughts and prayers to the family of Petty Officer McKnight,” said Rear Adm. Jim Kirk, the strike group’s commander, when he went missing. “I offer my thanks to all the sailors and airmen who were involved in the search for our shipmate.”

Jason Khai PhanSenior Airman Jason Khai Phan, 26, was killed in a single-vehicle crash on Sept. 12 while patrolling the perimeter of the Ali Al Salem Air Base in Kuwait.

Assigned to the 66th Security Forces Squadron out of Hanscom Air Force Base, Mass., Phan had been accepted as a military working dog handler but deployed to the 386th Air Expeditionary Wing’s Security Forces Squadron in Kuwait before he could train. He was awarded his K9 certification posthumously, said Hien Dom, executive director of the Vietnamese American Uniformed Services Association.

Phan and his family moved to the U.S. from Vietnam when he was 16 and settled in southern California, news reports said. He joined the Air Force after getting a degree in computer science at Orange Coast College in California.

“He came to this country with big dreams and aspirations and truly worked to obtain all of his goals,” said Tech. Sgt. Kenneth Souheaver of the 66th SFS, who served with Phan.

An Air Force reservist, Ouellette was a member of the 42nd Aerial Port Squadron stationed at Westover Air Reserve Base, Mass. From Merrimack, N.H., he worked as an air transportation specialist.

Seth Vernon Vande KampArmy Capt. Seth Vernon Vande Kamp, 31, was one of five American service members who died in a Nov. 12 helicopter crash in the Sinai Peninsula in Egypt, while serving with the Multinational Force and Observers peacekeeping contingent. A French officer and Czech soldier were also killed, and a sixth American was injured.

Born and raised in Missouri, Vande Kamp joined the Army after graduating from A.T. Still University’s Kirksville College of Osteopathic Medicine in Arizona in 2017, his obituary says. He completed his medical residency at Martin Army Community Hospital in Fort Benning, Ga., in June 2020.

“He loved science, and he loved to help people,” said his brother-in-law David Roth, an associate professor at Dordt University in Sioux City, Iowa, where Vande Kamp earned his bachelor’s degree in biology.

Vande Kamp arrived in Egypt in October. It was his first overseas assignment.

“He loved to fly,” his uncle David Ramirez, said in a report published on the website of KSAT-TV, the ABC affiliate in San Antonio, Texas, where Garza’s family is from. “Even when he was a boy ... when everyone was playing PlayStation and stuff like that, Dallas was in front of a PC learning the controls of aviation.”

Garza arrived in Egypt in January 2020. He had previously served in Iraq and Afghanistan.

“He loved helping people and always wanted to be part of something bigger than himself,” Muhaned Ghabour said in an interview published in the Boston Herald newspaper days after his brother died in the crash in Egypt.

“He also loved this country,” his brother said.

Marwan Ghabour commissioned as a warrant officer in 2018 and arrived in Egypt in January 2020 on his first overseas assignment. Like Garza, he was a pilot.

The native of Painesville, Ohio, who had previously served in South Korea, Afghanistan and Iraq, arrived in Egypt in July.

His father, Steve McKee, recalled in an interview with ABC affiliate News 5 Cleveland that his son had wanted, from an early age, to “go into the military."

He was from Watseka, Ill., about 90 miles south of Chicago.

He had previously served in South Korea and Afghanistan and his awards include an Army Commendation Medal and Army Achievement Medal.

“I join all Americans in honoring their sacrifice, as I keep their loved ones in my prayers,” President-elect Joe Biden said of those who died in the crash, which MFO said appeared to have been caused by a mechanical failure.

A medical doctor with the 60th Healthcare Operations Squadron at Travis Air Force Base, Calif., she was assigned to the 380th Air Expeditionary Wing while deployed.

“She was an exceptional medic, officer and teammate … her incredible presence will be deeply missed,” Brig. Gen. Larry Broadwell, 380th Air Expeditionary Wing Commander, said in a statement.

Leli earned her commission from the U.S. Air Force Academy in Colorado Springs, Colo., in 2012 and her medical degree from Rutgers University School of Medicine in 2016. She completed her family medicine residency at Travis, where she and her husband, Capt. Jimmy Leli, were based.