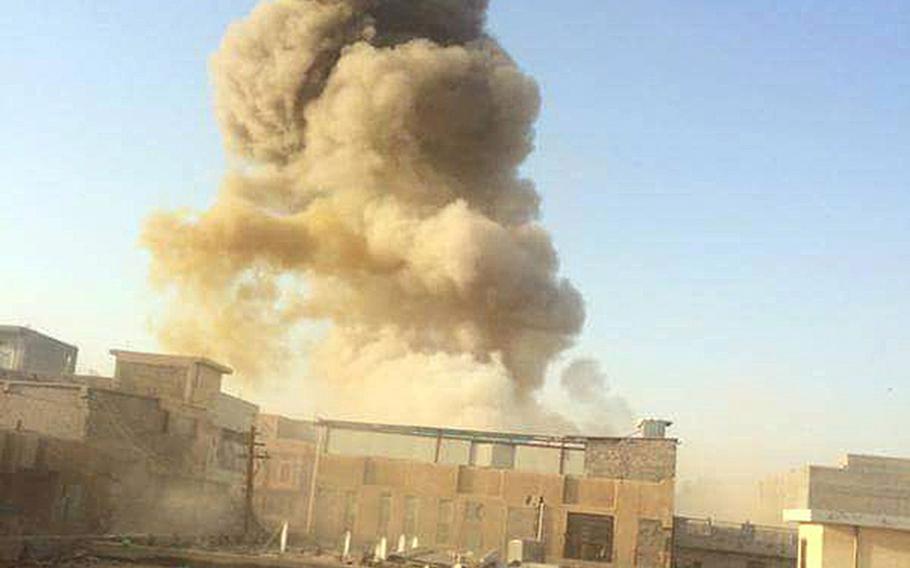 An Islamic State car bomb explodes at the gate of a government building near the provincial governor's compound in Ramadi, Iraq, on Saturday, May 16, 2015, during heavy fighting that saw most of the city fall to the militants. (Stringer/McClatchy DC/TNS)

Iraq’s stunning defeat in Ramadi has laid bare a weak link in the U.S. strategy for defeating the Islamic State: lack of effective means to fight the extremists in Sunni Muslim areas and win the trust of the Sunni population.

To reverse that situation, the U.S. needs to engage more intensively in Iraq, not necessarily with more troops but by using its political and diplomatic muscle to overcome Shiite resistance to a bigger role for Sunnis — and for Kurds in the north — in fighting the Islamic State, according to many U.S. analysts.

But without Sunni help, prospects for stabilizing the Sunni heartland in Anbar, Iraq's biggest province, are grim.

That truth was driven home last weekend when Iraq’s mostly Shiite soldiers and federal police chose to flee Anbar's capital of Ramadi rather than stand and fight after a lightning assault by a smaller Islamic State force. The dismal performance was reminiscent of the humiliating collapse of Iraq’s U.S.-trained army last summer in the face of an Islamic State assault in Mosul and a wide area of the north.

Reliance on Shiite militias also opens the door to greater influence by their patron Iran at the expense of Iraqi political leaders favored by the U.S.

Conflict between Iraq’s Shiite majority and the Sunni minority was the engine behind the bloody insurgency that U.S. troops fought so hard to crush during the 2003-2011 Iraq War. Most major Shiite political figures worked closely with the U.S. during the war, while Sunni areas such as Ramadi and Fallujah were the scenes of some of the most brutal fighting.

U.S. officials have long recognized the dangers of worsening the Sunni-Shiite rift in Iraq and the need to build support among Iraq’s Sunni population from which the Islamic State draws recruits.

To achieve that goal, American officials have urged the Shiite-dominated government in Baghdad to reach out to the Sunnis. The U.S. has also urged creation of a force of Sunni tribesmen to defend Anbar and other Sunni areas against their fellow Sunnis in the Islamic State.

That would follow the successful model of the 2006 “Anbar Awakening,” when the U.S. organized, trained and armed Anbar Sunnis who agreed to break with the Islamic State’s predecessor, al-Qaida in Iraq.

In the weeks before the Awakening emerged, the U.S. Marine chief of intelligence for Iraq had written that prospects for pacifying Anbar were dim and there was little the U.S. military could do to improve the situation there.

Winning over the Sunnis, however, turned the tide in Anbar.

After the U.S. withdrew in 2011, Iraq’s government squandered the opportunity presented by the Sunnis themselves. Former Prime Minister Nouri al-Maliki, a Shiite, reneged on promises to integrate the Awakening forces into the military and police or provide them jobs within the civil service.

Even now, the Iraqi government is stalling on delivering weapons to Anbar tribal leaders who agreed to join the fight. The mostly Shiite parliament has failed to approve legislation to create a Sunni National Guard. Opponents of the plan fear the weapons will end up in the hands of the Islamic State or be turned against the Shiites.

The Islamic State, meanwhile, has threatened to execute any Sunnis who oppose it. To drive home the message, the extremists massacred hundreds of men and boys from the Sunni Albu Nimr tribe in October.

Last month some Republicans in Congress proposed directly arming Iraqi Sunni and Kurds without interference by the Baghdad government. The proposal unleashed a wave of anger among government supporters in Baghdad.

An Iraqi newspaper claimed the proposal was an American plot to dismember Iraq, and powerful Shiite cleric Muqtada al-Sadr threatened to attack U.S. interests in Iraq and elsewhere if the Americans directly armed Sunnis and Kurds.

Kenneth Pollack, a Mideast expert at the Brookings Institution, argues that it’s time for the U.S. to step up pressure on the Iraqis to move on arming and training a Sunni force, even if over the objection of many Iraqi Shiites.

“Another canard deployed by the administration is that the U.S. lacks the leverage to convince Iraqis to do what we want them to do,” Pollack wrote on the Council on Foreign Relations website. “Whenever the United States has made a determined effort to press the Iraqi government to do something, Washington has gotten exactly the result it wanted.”

In a bid to break the logjam, Sunni and Kurdish leaders visited Washington in recent weeks to urge the Obama administration to provide them with weapons directly or pressure the Iraqi government to speed up delivery of equipment and supplies.

“When we push the Americans to give weapons or arms directly to both (Kurds) and the Sunnis, we are talking about reuniting Iraq rather than dividing it because it’s already divided now,” said former Deputy Prime Minister Rafi al-Issawi during his visit to Washington.