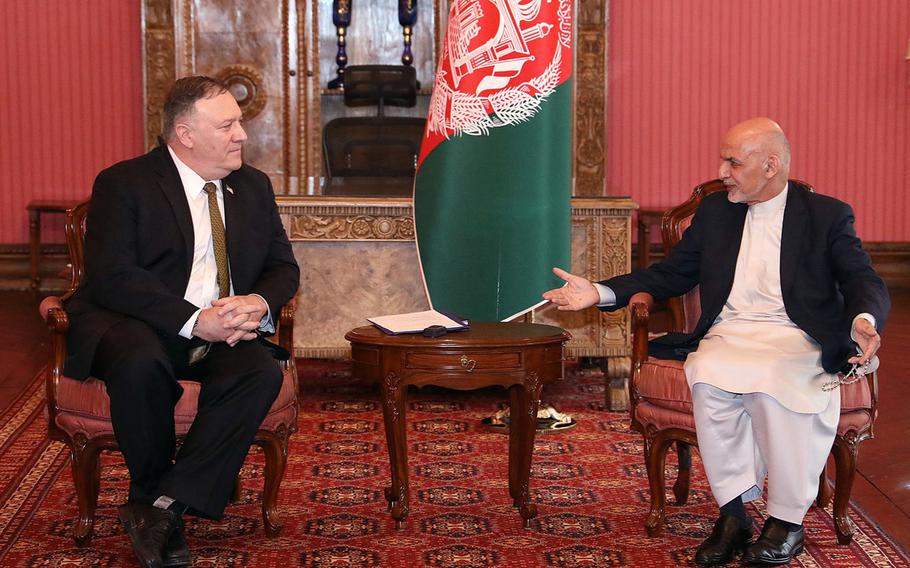 Secretary of State Mike Pompeo meets with Afghan President Ashraf Ghani in Kabul on Monday, March 22, 2020, after a number of setbacks delayed the Afghan peace process. ( Office of the President of Afghanistan)

KABUL, Afghanistan — Secretary of State Mike Pompeo made a surprise visit to Kabul on Monday to try to salvage the three-week-old deal between the U.S. and the Taliban, which has faltered amid disagreements over presidential election results and a prisoner release, and could be further delayed by the coronavirus.

Pompeo’s visit, which came despite a State Department warning against all international travel because of the coronavirus, underscored the urgency the U.S. places on advancing the peace process, which could see all American troops withdraw from Afghanistan by next spring.

Pompeo held talks with President Ashraf Ghani and his main political rival Abdullah Abdullah to try to end their standoff over who won last year’s presidential election. The claim by both men that they won has been partly responsible for delaying the start of talks between the government and the Taliban, officials from both sides said.

Talks between the government and the Taliban are a key precondition for the complete withdrawal of U.S. forces from Afghanistan in the deal signed by the U.S. and Taliban on Feb. 29 in Qatar. A phased drawdown that began this month will be completed within 14 months, provided all sides fulfill their commitments under the U.S.-Taliban deal.

Among those commitments was for intra-Afghan talks to begin on March 10 and, prior to that date, for the Taliban to release up to 1,000 detainees and the government up to 5,000 Taliban prisoners.

Ghani initially refused to release jailed Taliban fighters, saying that nothing in the deal prevented them from returning to the battlefield. But he later agreed to free the prisoners in phases if they had their biometric data recorded and signed a guarantee that they would not return to combat. The Taliban rejected that offer, saying all 5,000 of their fighters must be released at once.

On Sunday, the Taliban and government moved ahead on prisoner release when they held the first “technical talks” on the issue, via Skype video conferencing, U.S. special envoy Zalmay Khalilzad said on Twitter. The virtual talks, which were facilitated by the U.S. and Qatar, lasted more than two hours and were “important, serious and detailed,” Khalilzad said. A follow-up meeting was expected to be held in the next two days, Khalilzad said.

The meeting “solely centered on prisoner release … other issues will be dealt with during the intra-Afghan negotiations,” Taliban spokesman Suhail Shaheen said on Twitter.

The coronavirus led to the talks being held via Skype, The New York Times reported.

As of Monday, there were 42 confirmed coronavirus cases in Afghanistan and one person had died after contracting the virus, the health ministry said. Afghanistan shares a long, porous border with Iran, one of the countries most affected by the pandemic.

Not only could the number of cases in Afghanistan rise sharply in the coming weeks, but it’s also unlikely that planned intra-Afghan talks will be able to start in Europe any time soon because of the virus. The World Health Organization has said the Continent is the epicenter of the global pandemic and many European countries have closed their borders to try to stem the spread of the virus.

“It looks increasingly difficult/impossible to implement [the] peace process,” Barnett Rubin, director of the Center on International Cooperation at New York University, tweeted Saturday. “Quick start of intra-Afghan negotiations … was key to avoiding breakdown and escalation as are now happening.”

So far, no coalition member has tested positive for the virus, a Resolute Support spokesman said.