Pfc. Brandon Jay Kreischer and Spc. Michael Isaiah Nance died Monday, July 29, 2019, in Tarin Kowt, Uruzgan province, Afghanistan, as a result of wounds sustained in a combat related incident, the Defense Department said. The incident is under investigation. (US ARMY)

Pfc. Brandon Jay Kreischer and Spc. Michael Isaiah Nance died Monday, July 29, 2019, in Tarin Kowt, Uruzgan province, Afghanistan, as a result of wounds sustained in a combat related incident, the Defense Department said. The incident is under investigation. (US ARMY) 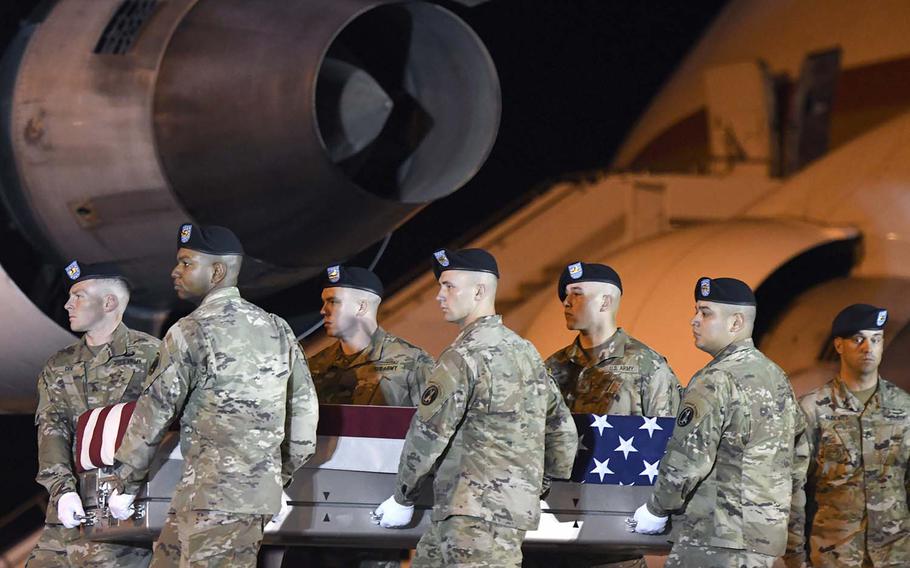 The Pentagon has identified two American paratroopers who were killed in combat in Afghanistan on Monday.

Spc. Michael Nance, 24, of Chicago, and Pfc. Brandon Kreischer, 20, of Stryker, Ohio, both died Monday in southern Uruzgan province from combat-related injuries, a Defense Department statement said Tuesday. The incident is under investigation.

"These young men were true all Americans and embodied the qualities of selfless service and courage as they answered our nation's call to deploy to Afghanistan," Col. Arthur Sellers, commander of the 3rd Brigade Combat Team, said in a statement.

Afghan officials told Stars and Stripes on Tuesday that both men were shot by an Afghan solider at a military base in the Shah Wali Kot district in southern Kandahar province. The 82nd Airborne confirmed the soldiers were struck by small-arms fire in Kandahar.

The Pentagon said Nance and Kreischer died in Tarin Kot, the capital of Uruzgan province, which borders Shah Wali Kot, suggesting the pair were transported to an American forward operating base that is located in Tarin Kot.

Ahmad Sadiq, a spokesman for the Afghan army’s 205th Corps, said the attacker was wounded and taken into police custody.

Taliban spokesman Qari Yousuf Ahmadi commended the attack in a statement, saying it was carried out by a “sensible Afghan soldier,” although not one of the militant group’s fighters.

The American paratroopers deployed to Afghanistan just weeks before they were killed.

Nance was on his first deployment to the country, according to family members who spoke with WMAQ-TV, Chicago’s NBC affiliate.

“He loved his country and wanted to serve his country,” Nance’s cousin, Trevor Harris, told the television station. “He died doing something that he loved.”

Nance joined the Army in 2017. His awards include the Combat Infantryman Badge, the Bronze Star Medal and the Purple Heart.

His remains were returned to Dover Air Force Base, Del., on Wednesday.

Kreischer, who enlisted in June 2018, was remembered as “an inspiration” by members of the gym he trained at in Ohio.

“We thought of Brandon as our own son,” a Facebook post by the Iron Faith gym said.

"He was very inspirational. He was upbeat. He was such a go-getter," Annette Bowers, a co-owner of the gym, added.

Kreischer is survived by his wife, of Fayetteville, N.C. His awards also include the Combat Infantryman Badge, the Bronze Star Medal and the Purple Heart.

The soldiers’ deaths bring to 14 the number of U.S. troops killed in Afghanistan this year. All but two were combat-related.