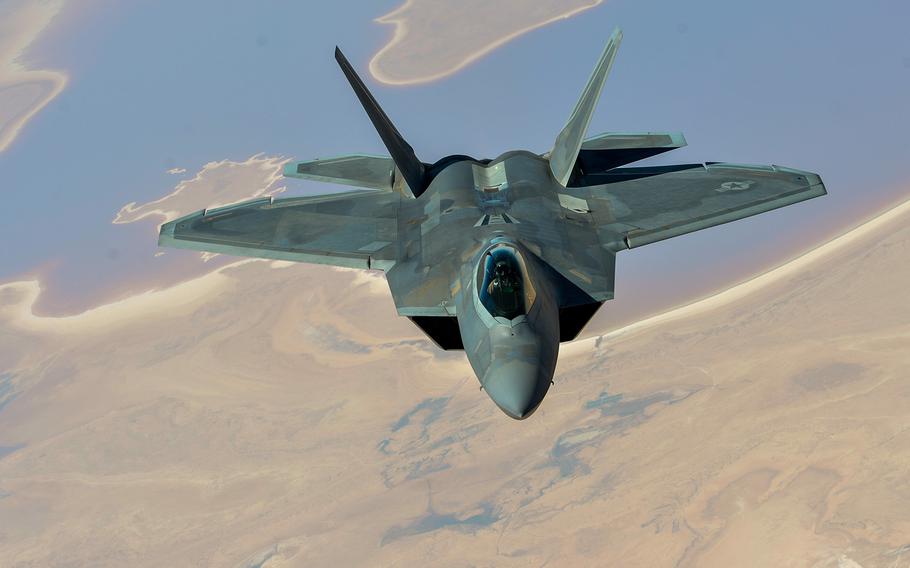 F-22 Raptor departs after receiving fuel from a KC-135 Stratotanker during a mission on Aug. 29, 2017, over an undisclosed location. (Michael Battles/U.S. Air Force)

WASHINGTON — The Pentagon has deployed about a dozen F-22 Raptor stealth fighter jets to the small Persian Gulf nation of Qatar as part of its recent buildup of forces amid tensions with Iran, Pentagon officials said Friday.

The advanced fighters arrived at Al Udeid Air Base just outside the Qatari capital Doha on Thursday, according to a U.S. Air Forces Central Command statement. Air Force photos showed the planes nearing and landing at the base, which houses some 10,000 American troops. The U.S. military uses the base to run its air operations across the Middle East and Afghanistan.

The fighter jets were part of a previously announced deployment of new forces into the Middle East, aimed at bolstering the ability of the United States to protect its forces throughout the region, especially in Iraq and Syria, where U.S. troops operate in close proximity to Iranian-controlled militias, a defense official said Friday. American officials have said since last month that credible intelligence showed Iranian forces and proxies could be planning to attack Americans in the region.

Air Forces Central Command said it was the first time F-22s had been deployed to Qatar.

The United States has blamed Iran for a series of mine attacks on commercial tankers in the Gulf of Oman in recent weeks. Iran also shot down an unarmed American reconnaissance drone last week near the Strait of Hormuz, a critical chokepoint for the world’s oil supply that connects the Persian Gulf to the Gulf of Oman. American officials said the RQ-4A Global Hawk was shot down in international airspace, but Iran maintains the drone entered its airspace.

President Donald Trump on June 21 said he was minutes away from ordering limited strikes on Iranian missile and radar locations but ultimately canceled the retaliatory strikes after learning some 150 people would likely be killed.

The New York Times reported the United States conducted offensive cyberattacks against Islamic Revolutionary Guard Corps — the hardline, elite branch of the Iranian military that the Americans blame for the ship attacks and the destruction of their drone. The attacks targeted computer systems which control missile and rocket launches, according to The Times, which cited unnamed U.S. officials in its report.

The United States has surged some 2,500 new troops into the Middle East since early May, claiming the need for “defensive capabilities.” On May 5, the White House abruptly announced it was speeding the USS Abraham Lincoln Carrier Strike Group and a B-52 bomber task force into the region, citing the unspecified threats from Iran and its proxy forces.

Part of that B-52 task force is also stationed at Al Udeid.

The new deployments have come at the request of Marine Gen. Kenneth McKenzie, who leads U.S. Central Command. Pentagon officials have not ruled out further troop deployments in the near future.

Trump on Wednesday told reporters that he was not considering any military action against Iran that would require “boots on the ground.” He also said any conflict with Iran “wouldn’t last very long.”

Trump and top Pentagon and State Department officials have repeatedly said the United States is not seeking a war with Iran. The president has said he aims — primarily through harsh economic sanctions — to drive Iran to the bargaining table to strike a new nuclear accord.

Last year, Trump pulled out of the previous Iran nuclear pact, the Joint Comprehensive Plan of Action, forged under President Barack Obama’s administration. Trump characterized it as a bad deal. Several major world powers, including the United Kingdom, France, Germany, Russia and China, have remained in that 2015 pact.

But Tehran has threatened to begin enriching uranium closer to weapons-grade levels if European nations do not offer new terms for the nuclear agreement.

Iranian officials said Friday that their nation would soon make a final determination about remaining in the JCPOA, according to Tehran’s semi-official Mehr news agency.