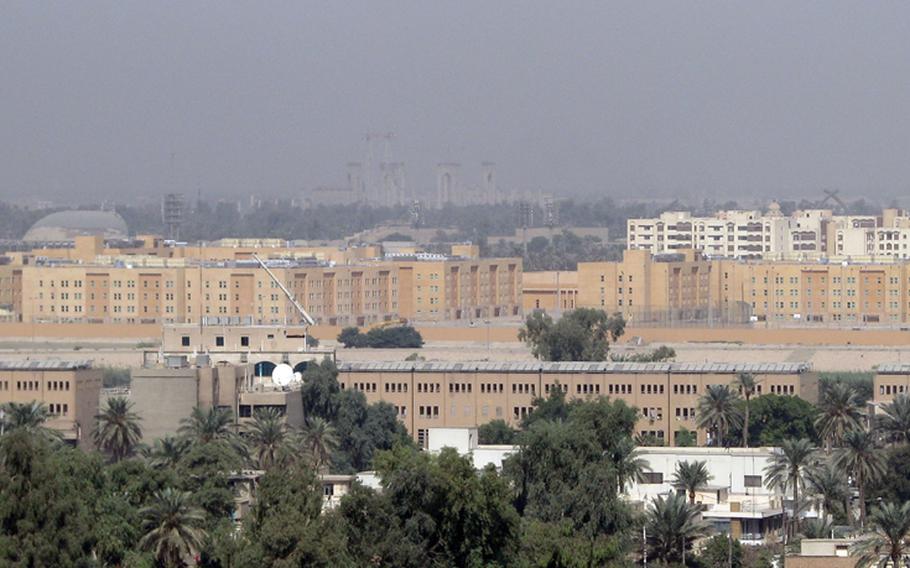 One of several projectiles fired at the diplomatic facility struck and damaged a dining facility inside the embassy compound, a coalition security official confirmed to Stars and Stripes shortly after the Sunday attack. Gen. Frank McKenzie, head of U.S. Central Command, told reporters traveling with him that the mortar attack had started a fire that was put out and had caused a minor injury to a U.S. national — not a military service member — who had since returned to duty, The Associated Press reported.

The attack, which was initially reported as a rocket strike, quickly drew condemnation from Iraq’s acting Prime Minister Adil Abdul-Mahdi, who said such acts threaten to drag the country into a new conflict.

Such “outlaw acts” weaken Iraqi sovereignty and the sanctity of diplomatic missions on its soil, Abdul-Mahdi’s statement said. He resigned as prime minister in November in the face of anti-government demonstrations, but continues to serve in a caretaker role until a replacement can be named.

Five rounds fell onto the international zone, which houses government buildings and foreign embassies, the Iraqi government’s security media cell said in an online statement. Three of them fell inside the U.S. Embassy compound, which is the world’s largest embassy, several media outlets reported.

A State Department official who responded to a Stars and Stripes inquiry on the attack declined to comment on the security situation in Baghdad, beyond stating that it remains tense and Iran-backed groups continue to pose a threat.

“So, we remain vigilant,” the official said via email, in which they also called on Iraq to fulfill its obligations to protect diplomatic facilities. Iraqi militia members and their backers had stormed the embassy compound on New Year’s Eve, forcing the U.S. to quickly deploy about 100 Marines from Kuwait to reinforce the facility.

It’s the second rocket attack to target the U.S. Embassy in six days and is the latest in a series of sporadic rocket strikes that began targeting areas housing U.S. forces in the country last summer as Washington warned of increasing threats from Iran and its proxies in response to the Trump administration’s maximum pressure campaign. Trump has imposed harsh sanctions in an attempt to force Tehran to renegotiate an Obama-era nuclear agreement that the U.S. president and his supporters have criticized as a bad deal.

Recent months have seen more than a dozen rocket attacks on the Green Zone and Iraqi bases hosting U.S. and coalition forces elsewhere in the country, which U.S. officials have called on Abdul-Mahdi’s government to prevent. The U.S. has blamed the attacks on Shiite militia groups, which have Iranian backing but are formally part of Iraq’s security forces.

Continued strikes could have dire consequences for Iraq, Abdul-Mahdi warned, citing the risk of damaged relations with allies or of the possibility the country could be dragged into an open conflict, apparently alluding to ongoing U.S.-Iran turmoil. Iraqi security forces are still battling Islamic State insurgents, and some officials and observers fear instability and internal chaos could allow the terrorists to regroup and resurge.

Abdul-Mahdi’s warning follows several weeks of heightened U.S.-Iran tensions, which were ratcheted up by a deadly rocket strike last month on a base near the Iraqi city of Kirkuk.

After an American civilian contractor was killed in that attack, a series of escalations preceded a U.S. drone strike in Baghdad that killed Iranian Maj. Gen. Qassem Soleimani and an Iraqi militia leader closely tied to him. Weeks of drama capped off with a retaliatory missile barrage by Iran that left 34 Americans with traumatic brain injuries and the shooting down of a civilian airliner.

Protests erupted in Iran after the government there took responsibility for the airliner incident. Iraq has also been gripped by anti-government demonstrations seeking to end Iran’s influence and foreign interference in the country’s government. Government crackdowns have killed and injured hundreds of demonstrators since October.

Security forces have been ordered to work to arrest those responsible for the rocket strikes on the Green Zone and to prevent future attacks, Abdul-Mahdi’s statement said Sunday.

The caretaker prime minister had backed a measure by Iraq’s largely Shiite parliament calling for the government to expel the U.S.-led coalition from the country over what they viewed as violations of Iraqi sovereignty by striking militia outposts and killing Soleimani, but he has said it will be up to his yet-unnamed successor to implement such a move. The U.S. has said it isn’t planning to withdraw the approximately 5,000 American troops deployed to the country to assist in the fight against ISIS.

Meanwhile, Iraq’s government is committed to protecting diplomatic missions, Abdul-Mahdi said. He called for a stop to the rocket attacks, and asked that the perpetrators be exposed and held responsible for pushing the country toward an “unimaginable consequence.”