On target: The making of an airstrike against ISIS aboard the USS Bush 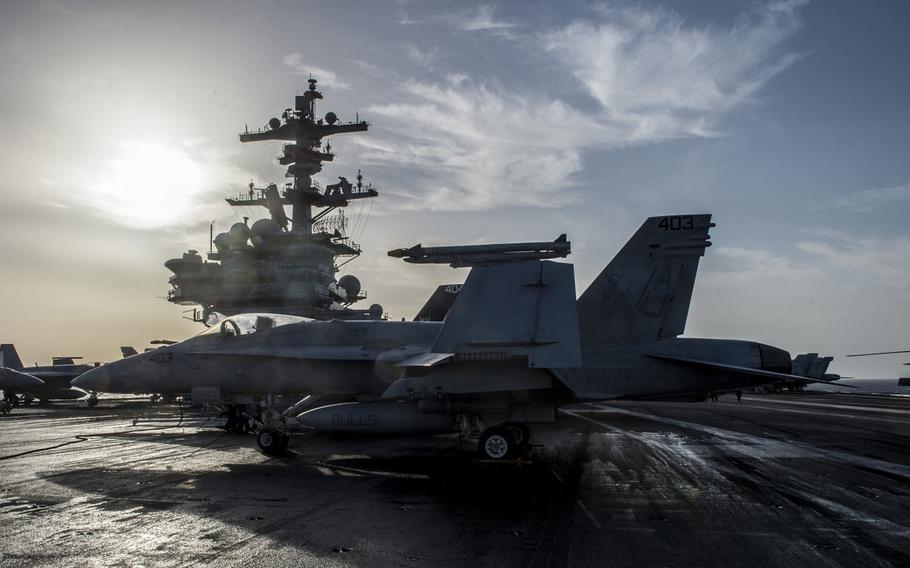 An F/A-18 Super Hornet sits on the flight deck of the aircraft carrier USS George H.W. Bush on April 20, 2017. The carrier is currently deployed to the Persian Gulf supporting maritime security operations and the coalition to defeat the Islamic State in Iraq and Syria. (Chris Church/Stars and Stripes)

An F/A-18 Super Hornet sits on the flight deck of the aircraft carrier USS George H.W. Bush on April 20, 2017. The carrier is currently deployed to the Persian Gulf supporting maritime security operations and the coalition to defeat the Islamic State in Iraq and Syria. (Chris Church/Stars and Stripes) 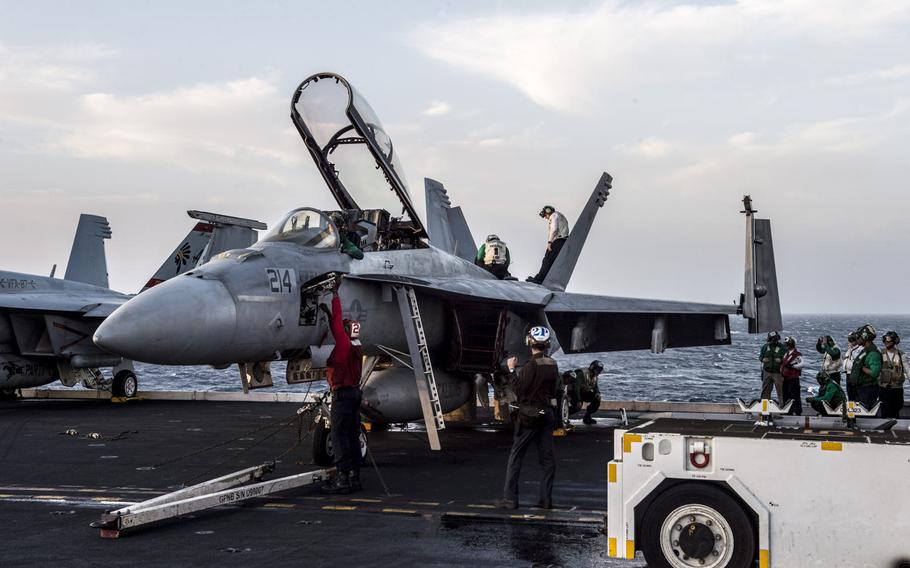 Flight deck crew onboard the aircraft carrier USS George H.W. Bush conduct a pre-flight check in the morning on an F/A-18 Hornet in the Persian Gulf. (Chris Church/Stars and Stripes) 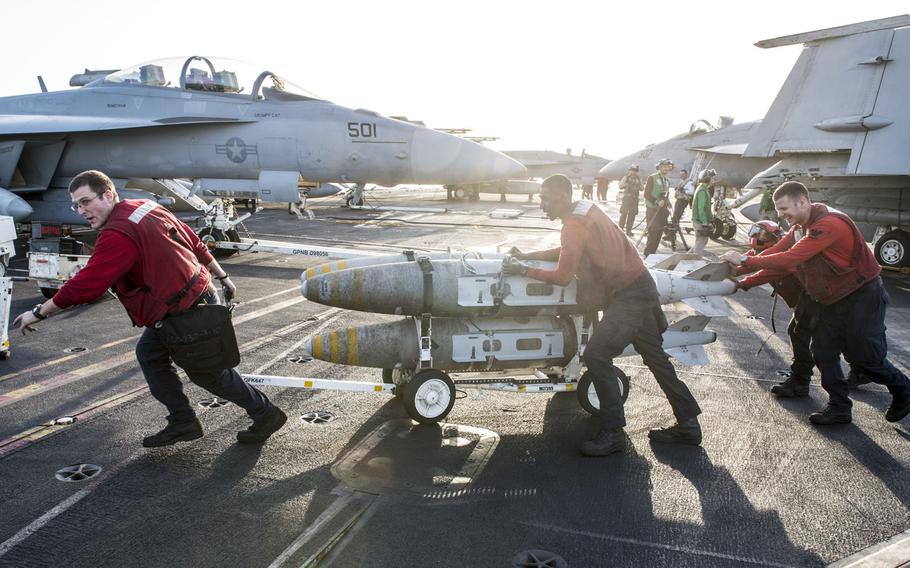 Aviation ordnance teams push munitions weighing thousands of pounds to aircraft during a morning load out onboard the aircraft carrier USS George H.W. Bush in the Persian Gulf on April 20, 2017. (Chris Church/Stars and Stripes) 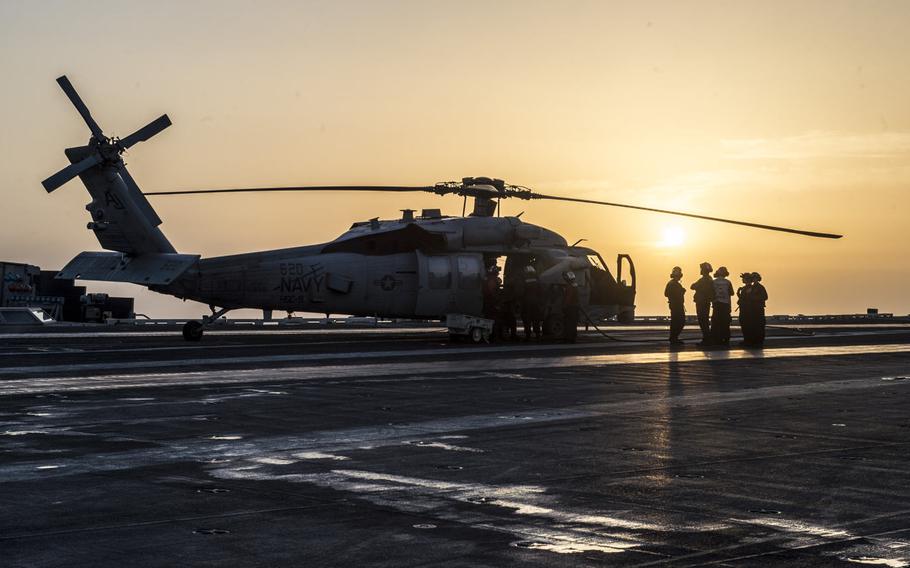 Flight deck crew onboard the aircraft carrier USS George H.W. Bush check a helicopter prior to take off in the Persian Gulf on April 20, 2017. (Chris Church/Stars and Stripes) 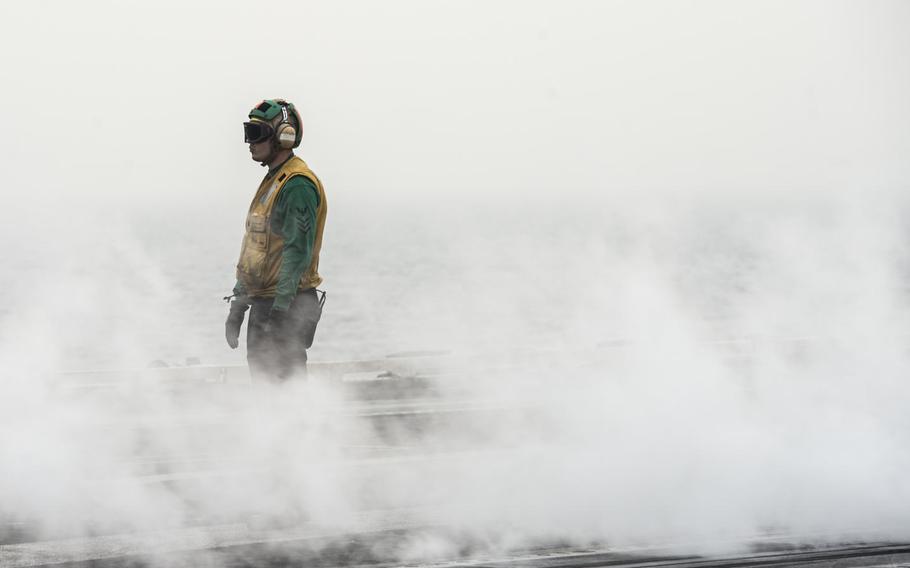 A flight deck crewmember watches to ensure the catapult moves into the correct position to launch an aircraft off the flight deck of the aircraft carrier USS George H.W. Bush in the Persian Gulf. (Chris Church/Stars and Stripes) 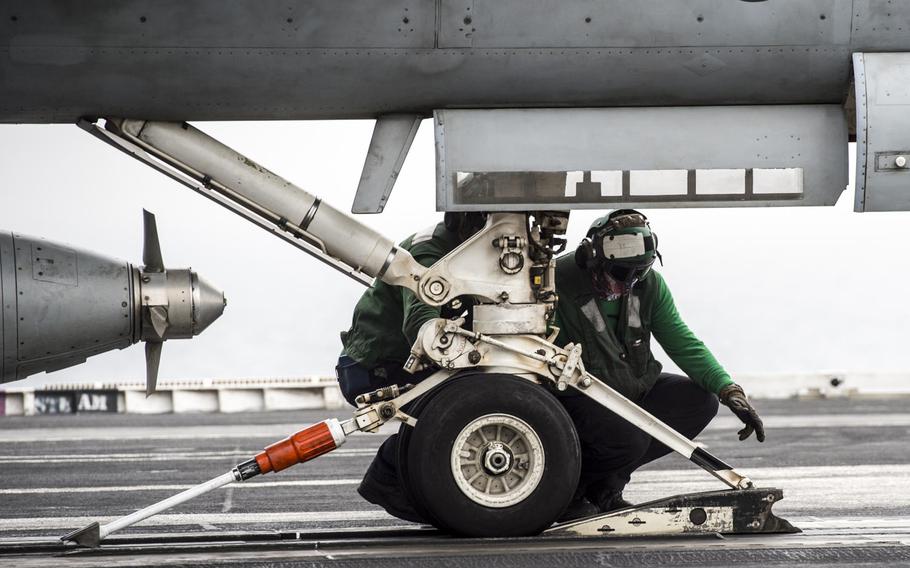 Catapult personnel ensure the catapult is correctly connected to an aircraft prior to launching off of the flight deck of aircraft carrier USS George H.W. Bush in the Persian Gulf on April 19, 2017. (Chris Church/Stars and Stripes) 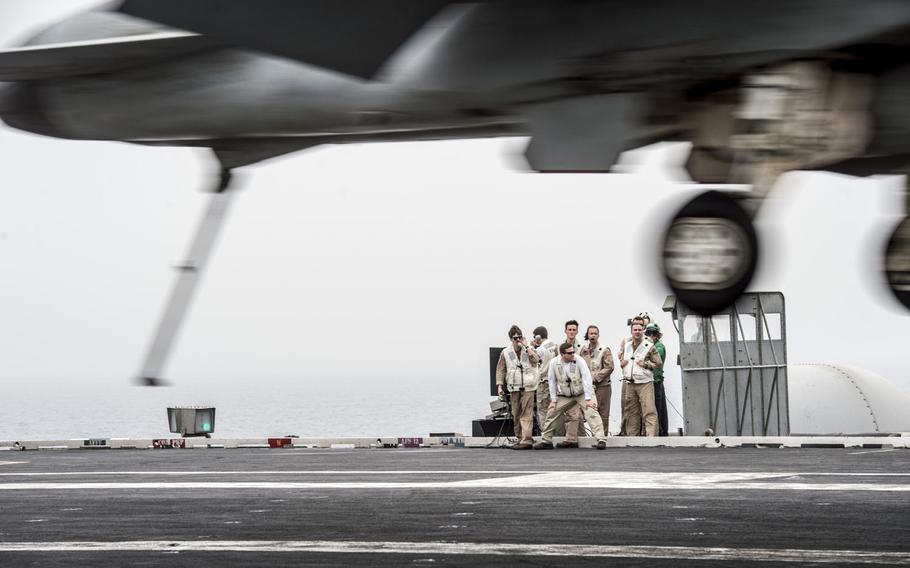 Landing officers grade the landing of an aircraft onboard the aircraft carrier USS George H.W. Bush in the Persian Gulf on April 19, 2017. (Chris Church/Stars and Stripes) 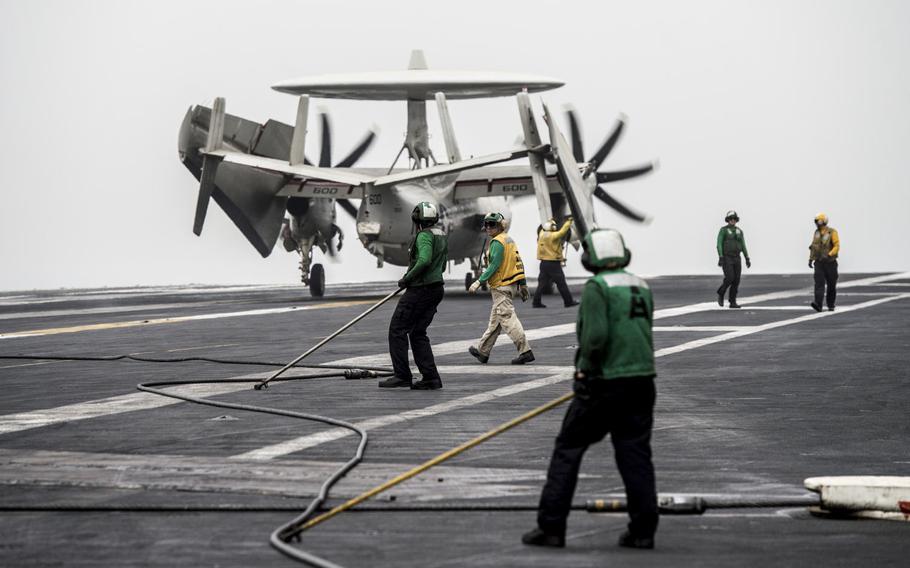 Arresting gear personnel push the arresting cable back into position following an aircraft recovery onboard the aircraft carrier USS George H.W. Bush in the Persian Gulf on April 19, 2017. (Chris Church/Stars and Stripes) 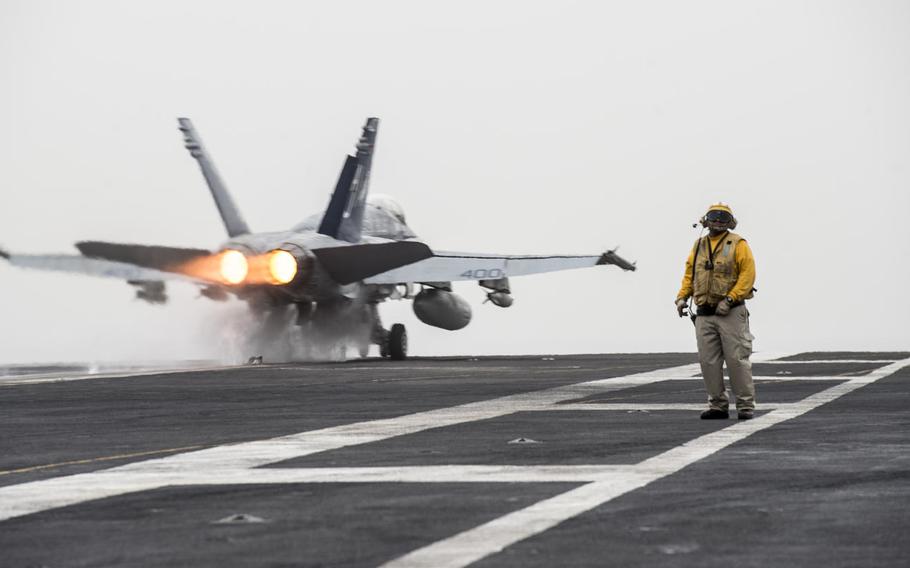 An F/A-18C Hornet launches from the flight deck of aircraft carrier USS George H.W. Bush in the Persian Gulf. (Chris Church/Stars and Stripes)

ABOARD USS GEORGE H.W. Bush — On the flight deck, a golden sunrise cast its rays across a small group of sailors in colored jerseys preparing for the day’s operations. Those in brown inspected jets, red shirts loaded ordnance onto wings, and the ones in blue and yellow directed aircraft.

This peaceful scene somewhere in the Persian Gulf aboard a 100,000-ton war machine would soon become frenetic, with several steam catapults launching aircraft from a standstill to 150 mph in mere seconds.

Since shortly after the Norfolk, Va.-based carrier’s latest deployment began in January, F/A-18C Hornet pilots have done a “good mixture” of both preplanned and “dynamic” airstrikes against Islamic State targets from both the Mediterranean and Persian Gulf, said Navy Lt. Cmdr. Butters, a fighter pilot who for security reasons gave only his call sign. The pilots take part in roughly 20 flight operations daily.

Preplanned airstrikes are the culmination of activities that vary in length and complexity, spanning hours, days or even months, and involving teams on the ship and hundreds of miles away. Here’s a look at how an airstrike typically evolves from a single report of enemy activity to a sortie launched from the Bush.

Days before a strike

Most coalition strikes are “dynamic,” which develop rapidly in response to conditions on the ground, but many others are deliberately planned over long time periods at operation centers in Iraq and Qatar hundreds of miles away.

At one such strike cell in a dimly lit airport terminal in the Kurdish region’s capital of Irbil in northern Iraq, coalition analysts and planners sat at rows of workstations.

The experts here, and at similar centers in Baghdad and Al Udeid in Qatar, vet potential targets against legal authorities, rules of engagement and other requirements. They identify targets and then select weapons and timing to minimize unintended damage.

“It takes more effort, work and analysis to get to a point where we can achieve positive identification (of targets),” said Col. Patrick Sutherland, chief of intelligence at the 609th Air Operations Center in Al Udeid.

Once developed, a strike package goes to a senior target engagement authority for approval, which may involve further vetting and legal review. Dynamic strikes — generally close air support for ground troops engaged with the enemy — follow the same general process, officials said, but may be approved by subordinate commanders closer to the front lines.

In Iraq, all strikes must be approved by the government, said Brig. Gen. Rick Uribe, the coalition’s deputy commanding general in Baghdad.

After receiving authorization, targets are prioritized on the Air Tasking Order — a detailed document notifying all components of all capabilities, missions and air sorties for a 24-hour period. The carrier’s air crews are notified of their missions the afternoon before the strike.

Within the air wing, the mission commander — normally a pilot or weapons system officer — determines how the mission will look, but everyone involved has a voice in the planning, Butters said.

Shortly before each mission, crew members gather for a preflight briefing “focused on all aspects of the flight itself, breaking them into pieces we can tackle and execute during each portion of the flight,” Butters said.

Aboard the ship, air crew personnel gathered in one of several squadron ready rooms, a sort of lounge decked out with big leather chairs. Crew members drank coffee, chatted and watched ongoing carrier launches and landings on wall-mounted monitors.

Near the front of the room, Butters and two other air crew members sat down to begin their preflight brief for a defensive flight around the carrier. They discussed the launch, transit to their patrol area, aerial refueling, the mission, the return and a safe ship landing.

With flight operations in full swing, aircraft lined up on the Bush’s deck waiting their turn to shoot off the carrier. Personnel crowded the flight deck as the jets moved into position, their engines giving off face-melting heat.

Depending on the mission, the warplanes can be airborne anywhere from one to seven hours. While loitering over the mission area, the air crew typically remain in contact with airspace management elements on the ground, Butters said. Ground elements and strike cells pass details of dynamic strike requests — locations, types of ordnance and how to execute them. It helps that ISIS has very limited anti-aircraft capabilities, which pose little threat to U.S. warplanes.

“If things are slow, we’ll make comments about how something went previously in a flight or talk about light subjects, but typically it’s pretty focused on what we are doing,” Butters said.

Even though ISIS doesn’t possess a significant anti-aircraft capability, it’s not like there aren’t any threats to look out for up there. Russia last month threatened to shoot down foreign aircraft in its area of operation in Syria after an F/A-18E Super Hornet from the Bush shot down a Syrian ground attack jet.

After a strike, a battle damage assessment is completed to ensure it achieved its desired physical affects against its target.

“There’s also more (discussion of) how successful was a particular strike as it relates to the larger effect on the enemy,” Sutherland said. As the coalition works to destroy ISIS in its final urban stronghold in Mosul, the civilian population in tightly packed neighborhoods have made it harder to limit unwanted damage and casualties. The coalition will face similar challenges in Raqqa, the terrorist group’s capital.

“There are still ways we can do it,” said Col. William Denham, combat plans division chief for the 609th Air Operations Center. “It’s more about adjusting which weapons you use and ensuring ... we know exactly what we are hitting before we hit it.”

As of May, the coalition estimated that in more than 46,500 engagements since August 2014, at least 603 civilians had been unintentionally killed. Airwars, an independent monitor tracking civilian deaths from coalition airstrikes in Iraq, Syria and Libya, estimates the civilian casualties through the end of June to be between 4,300 and 6,700.

Despite the challenges on the ground, “the support from the air is going to continue,” Denham said.

After a full day of flying, pilots still face the challenge of landing back aboard the carrier, which involves significant risk. “Especially the landing at night after a long mission,” Butters said. “It’s something we’ve trained very extensively for ... but it’s not without challenges, for sure.”

At the end of a long day, it was nearly pitch black on the flight deck. Only a few lights assisting navigation and launch and recovery operations were allowed.

As fighter jets slammed to the deck and their tailhooks connected to arresting cables spread across it, a plane came to an abrupt stop, its afterburners blasted bright flames. Soon the roar of the jets turned to a low growl and the fire faded into the flattop’s busy darkness.