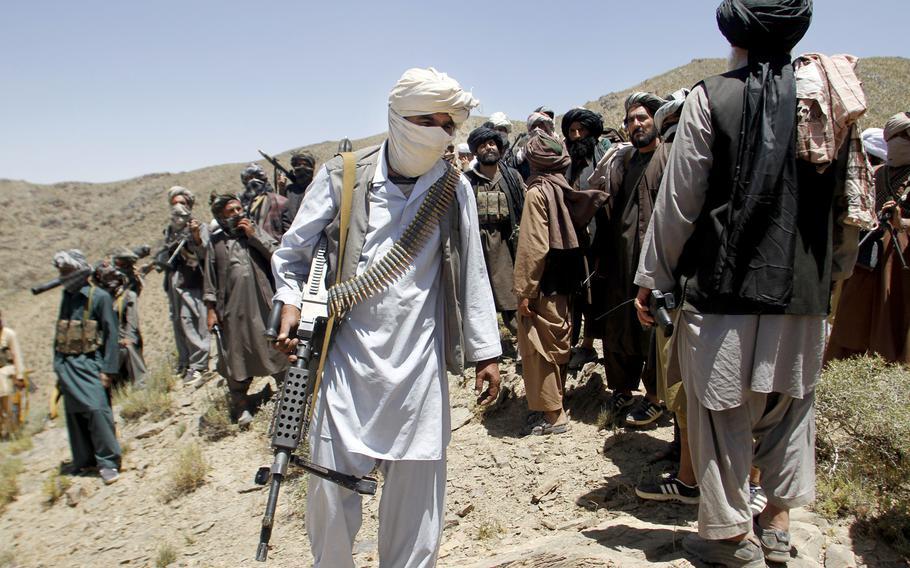 In this Friday, May 27, 2016 photo, members of a breakaway faction of the Taliban fighters walks during a gathering, in Shindand district of Herat province, Afghanistan. A string of coordinated Taliban attacks on police checkpoints in the increasingly volatile southern Afghan province of Helmand killed at least 12 policemen, an official said Monday. (Allauddin Khan/AP)

In a separate operation, government forces arrested a prolific Pakistani bomb-maker for the Taliban, a police spokesman said.

The U.S. drone strikes were carried out Sunday “against individuals threatening the force” in the Shah Wali Kot district of southern Kandahar province, U.S. Air Force Capt. Matthew Chism, a spokesman in Kabul for the NATO-led mission, said in a statement.

The international coalition transitioned from a combat mission to a train-advise-assist mission known as Resolute Support in January 2015. Publicly disclosed rules of engagement and agreements with the Afghan government generally allow international advisers to attack Taliban targets in self-defense.

Kandahar police spokesman Zia Durrani told Stars and Stripes that U.S. forces carried out the Sunday night airstrike in cooperation with Afghan forces. He said at least 22 militants were killed, but a separate statement from the Defense Ministry put the death toll at 17.

Durrani said the airstrikes targeted Taliban hideouts in the Kata Sang area of the district. No civilian casualties were reported from the airstrike, he said. There was no immediate comment from the Taliban.

The drone attacks follow a series of high-profile U.S. and Afghan operations that have killed top Taliban leaders.

Mansour was killed nearly a year after officially taking charge of the insurgent group after it was revealed that his predecessor, the one-eyed founder of the Taliban, Mullah Mohammad Omar, had died in 2013. Manour’s successor, Mullah Haibattullah Akhundzada, was announced last week.

Yaqoub is leading the fight in the south, The Associated Press reported.

Fighting has intensified across the provinces of Helmand, Kandahar and Uruzgan as the Taliban shift their offensive to the south, where the opium poppy harvest — the Taliban’s main source of revenue — has ended.

Military officials have predicted fighting would intensify in recent weeks, but they have also said Afghan government forces are taking a more offensive posture against the Taliban, compared to last year when they suffered heavy losses and major setbacks.

In the past week, Afghan security forces have killed the shadow governors in Helmand and neighboring Uruzgan province, as well as the military commission chief in Uruzgan.

Durrani also said a separate effort by the Kandahar police led to the arrest of a Pakistani minemaker in the district Monday, during a special military operation.

Mohammad Amin, a resident of Pakistan’s Punjab province, has been making improvised explosive devices for the Taliban for five years, Durrani said, and has admitted to making hundreds of bombs.

“This man was wounded a while ago while making a bomb,” Durrani said. “He had lost his left arm but he still was helping the Taliban with making bombs.”

However, government forces also have suffered casualties in the recent fighting in the south.

In Helmand province, 57 policemen have been killed and 37 wounded in the past two days of fighting in the Nad-e-Ali and Gereshk districts, said Hismatullah Daulatzai, head of police for the greater Helmand zone. He said the insurgents have captured 10 police outposts.

The Taliban claim to have overrun 13 outposts in Helmand province in recent days.