Obama: US will be ‘relentless’ seeking justice for Foley This undated file still image from video released April 7, 2011, by GlobalPost, shows James Foley of Rochester, N.H., a freelance contributor for GlobalPost, in Benghazi, Libya. In a horrifying act of revenge for U.S. airstrikes in northern Iraq, militants with the Islamic State extremist group have beheaded Foley and are threatening to kill another hostage, U.S. officials say. (GlobalPost)

This undated file still image from video released April 7, 2011, by GlobalPost, shows James Foley of Rochester, N.H., a freelance contributor for GlobalPost, in Benghazi, Libya. In a horrifying act of revenge for U.S. airstrikes in northern Iraq, militants with the Islamic State extremist group have beheaded Foley and are threatening to kill another hostage, U.S. officials say. (GlobalPost) 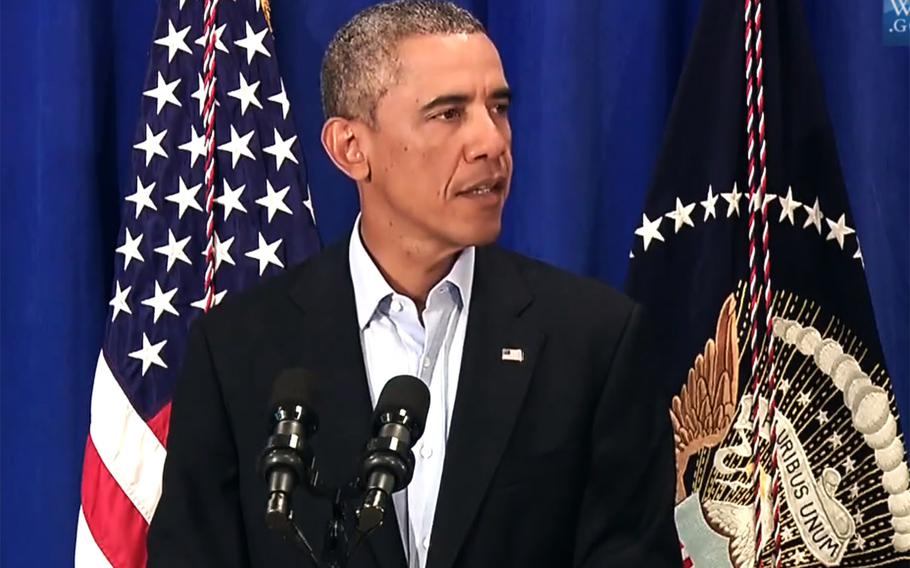 President Barack Obama speaks about the murder of James Foley, Augusy 20, 2014. (From a White House video)

WASHINGTON — President Barack Obama said Wednesday the United States will be relentless in seeking justice for an American journalist beheaded by terrorist group the Islamic State.

Obama called the killing an act of “hateful terrorism” that contrasts with freelance reporter James Foley’s work exposing suffering in the Syria war and compared the Islamic State to a spreading cancer that now threatens Muslims as well as others in Iraq and the region.

The president stopped short of declaring any new military action against escalating provocations and threats from the Islamic State, saying that the U.S. will continue to act “alongside” others to combat the threat. The Pentagon said unmanned drones continued airstrikes in Iraq on Wednesday.

The Islamic State posted a video of the beheading online Tuesday in reaction to U.S. airstrikes a day earlier that helped Iraqi army and Kurdish peshmerga forces retake Mosul Dam in northern Iraq — the first major offensive victory over the militant Islamist group since it pushed across the Syrian border in June, began seizing large swaths of the country and declared a religious caliphate.

The administration confirmed the authenticity of the video, which showed a masked member of the Islamic State killing Foley with a knife, accusing the United States for causing his death, and taunting the president with the killing of Steven Sotloff, another American journalist captured while reporting on the civil war in Syria.

“The United States will continue to do what we need to do to protect our people. We will be vigilant and we will be relentless,” Obama said. “When people harm Americans anywhere we do what is necessary to see that justice is done and we act against ISIL standing alongside others.”

The kililng and threats are the clearest indication yet that the al-Qaida splinter group is focusing on American targets after a lightning advance through Iraq that reaped weapons, money and territory.

The administration strategy is pinned to Baghdad unifying the country to beat back the Islamic State. For Obama, the escalating violence poses a stark choice over deeper involvement following a withdrawal of U.S. forces from the country in 2011 and his promises that new bombing campaigns begun Aug. 7 will not lead to a ground war.

On Wednesday, the president called on Iraqis and Syrians to rise up against the group, saying it is pushing a “bankrupt ideology” that has caused the deaths of thousands of Muslims.

“People like this ultimately fail. They fail because the future is won by those who build and not destroy, and the world is shaped by those like Jim Foley and the overwhelming majority of humanity who are appalled by those who killed him,” Obama said.

Foley was taken prisoner in November 2012 while reporting on the strife in Syria, where the Islamic State first established power amid the civil war between resistance forces and the heavily armed military of President Bashar Assad. Foley reported from Afghanistan for Stars and Stripes in 2011 and had also been taken captive by insurgents once before in Libya when Moammar Gadhafi was forced from power.

The Foley family posted a statement on a Facebook page dedicated to finding the reporter when he was still missing, and which urged Islamic State to release him.

“We implore the kidnappers to spare the lives of the remaining hostages,” his mother wrote. “Like Jim, they are innocents. They have no control over American government policy in Iraq, Syria or anywhere in the world.”

In the video released Tuesday, Sotloff appears only for a moment and is show with a shaved head and orange jumpsuit crouching in a barren desert landscape beside Foley’s killer.

The masked Islamic State operative tells Obama that his next move will determine Sotloff’s fate.