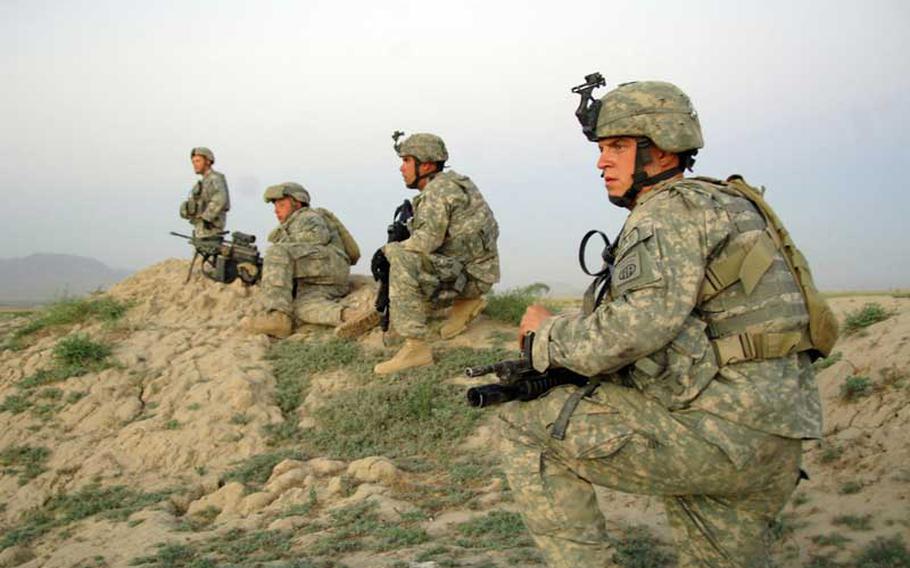 U.S Army Soldiers from Company A, 2nd Battalion, 508th Parachute Infantry Regiment move into position to support Afghan National police who are moving in to apprehend a suspect during a cordon and search of Pana, Afghanistan, June 9, 2007. (Michael L. Casteel/US Army)

WASHINGTON — The White House plans to bring home about 34,000 troops from Afghanistan by February 2014, cutting the U.S. presence there by more than half.

The announcement, part of President Barack Obama’s State of the Union address on Tuesday evening, sets the stage for the final days of the 12-year-old war. NATO officials have already approved plans to end all combat operations in Afghanistan by the end of 2014, with only a small contingent of American troops remaining to support the country’s fledgling army.

A source familiar with Obama’s speech confirmed that the troop announcement will be part of the president’s annual report to Congress. Pentagon officials had no comment on the news.

With the announcement, Obama will make good on his commitment to continue reducing troop numbers after all 33,000 U.S. surge troops who turned the tide of battle in southern Afghanistan were withdrawn last September.

The surge troops, fully in place by 2010, pushed U.S. troop numbers in Afghanistan to more than 100,000 – the highest level of the war. They took towns and territory from the Taliban in a swath of the country known as the heartland of the insurgent movement.

Some commanders argued that once the south was stabilized, surge troops should be transferred to the east to secure Kabul and battle insurgents in the country’s violent eastern provinces.

But with legislators and the U.S. public growing weary with the war, the Obama administration decided to reduce troop numbers and focus on training and assistance of Afghan troops while pushing them to the front in battle as quickly as possible.

“(Reductions) will continue at a steady pace, with more of our troops coming home,” Obama said during a surprise visit to Afghanistan last spring. “And as our coalition agreed, by the end of 2014 the Afghans will be fully responsible for the security of their country.”

About 100,000 foreign troops are still based in Afghanistan, with almost two-thirds of them from the United States.

This weekend, Marine Gen. Joseph Dunford took charge of the peacekeeping force in Afghanistan, pledging in a Kabul speech that the international community is still committed to building Afghan security forces and keeping the country stable.

On Tuesday, the Washington Post reported that Pentagon officials are pushing to keep about 8,000 U.S. troops in Afghanistan past 2014, arguing that some residual presence is needed to ensure that insurgent groups do not overwhelm the Afghan security forces.

Chris Carroll contributed to this report.