Obama Administration's changing rhetoric in the fight against Islamic State 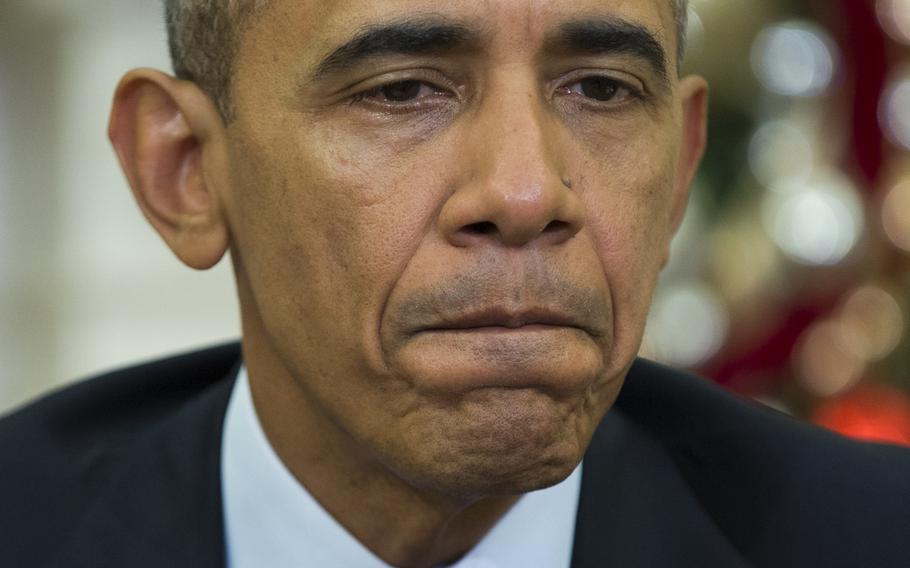 WASHINGTON — From talk of peace to the rhetoric of war, President Barack Obama’s policy in the Middle East is coming full circle, driven by the threat from the Islamic State and global terrorism.

Here’s a look at how America’s military role in the Middle East has deepened, told in the Obama administration’s own words:

Obama, Oct. 21, 2011, announcing a complete U.S. troop withdrawal from Iraq: “So today, I can report that, as promised, the rest of our troops in Iraq will come home by the end of the year. After nearly nine years, America’s war in Iraq will be over.”

Obama, June 19, 2014, as Islamic State fighters swept across northern and western Iraq: “We have had advisers in Iraq through our embassy, and we’re prepared to send a small number of additional American military advisers — up to 300 — to assess how we can best train, advise and support Iraqi security forces going forward. American forces will not be returning to combat in Iraq, but we will help Iraqis as they take the fight to terrorists who threaten the Iraqi people, the region and American interests as well.”

Obama, Aug. 7, 2014: “In recent days, these terrorists have continued to move across Iraq and have neared the city of Irbil, where American diplomats and civilians serve at our consulate and American military personnel advise Iraqi forces.

“To stop the advance on Irbil, I’ve directed our military to take targeted strikes against ISIL terrorist convoys should they move toward the city. We intend to stay vigilant, and take action if these terrorist forces threaten our personnel or facilities anywhere in Iraq, including our consulate in Irbil and our embassy in Baghdad. …

“As commander in chief, I will not allow the United States to be dragged into fighting another war in Iraq. And so even as we support Iraqis as they take the fight to these terrorists, American combat troops will not be returning to fight in Iraq, because there’s no American military solution to the larger crisis in Iraq.”

Obama, Sept. 10, 2014: “Our objective is clear: We will degrade, and ultimately destroy, ISIL through a comprehensive and sustained counterterrorism strategy.

“First, we will conduct a systematic campaign of airstrikes against these terrorists. Working with the Iraqi government, we will expand our efforts beyond protecting our own people and humanitarian missions, so that we’re hitting ISIL targets as Iraqi forces go on offense. Moreover, I have made it clear that we will hunt down terrorists who threaten our country, wherever they are. That means I will not hesitate to take action against ISIL in Syria, as well as Iraq. This is a core principle of my presidency: If you threaten America, you will find no safe haven.

“Second, we will increase our support to forces fighting these terrorists on the ground. In June, I deployed several hundred American servicemembers to Iraq to assess how we can best support Iraqi security forces. Now that those teams have completed their work — and Iraq has formed a government -- we will send an additional 475 servicemembers to Iraq. As I have said before, these American forces will not have a combat mission — we will not get dragged into another ground war in Iraq.”

Obama, Sept. 17, 2014, in a speech at MacDill Air Force Base, Tampa, Fla.: “One of the things we’ve learned over this last decade is America can make a decisive difference. But I want to be clear: The American forces that have been deployed to Iraq do not and will not have a combat mission. As your commander in chief, I will not commit you and the rest of our armed forces to fighting another ground war in Iraq. After a decade of massive ground deployments it is more effective to use our unique capabilities in support of partners on the ground so they can secure their own countries’ futures. And that is the only solution that will succeed over the long term.”

Obama, Sept. 23, 2014: “The people and governments of the Middle East are rejecting ISIL and standing up for the peace and security that the people of the world deserve. Not since the Gulf War has the United States been joined in direct military action by such a broad coalition of Arab partners. Meanwhile, we will move forward with our plan — supported by bipartisan majorities in Congress — to ramp up our effort to train and equip the Syrian opposition, who are the best counterweight to ISIL and the Assad regime.”

“Earlier this month, I outlined for the American people our strategy to confront the threat posed by the terrorist group known as ISIL. I made clear that as part of this campaign the United States would take action against targets in both Iraq and Syria so that these terrorists can’t find safe haven anywhere. I also made clear that America would act as part of a broad coalition. And that’s exactly what we’ve done. …

“Meanwhile, we will move forward with our plans, supported by bipartisan majorities in Congress, to ramp up our effort to train and equip the Syrian opposition, who are the best counterweight to ISIL and the (President Bashar) Assad regime. And more broadly, over 40 nations have offered to help in this comprehensive effort to confront this terrorist threat — to take out terrorist targets; to train and equip Iraqi and Syrian opposition fighters who are going up against ISIL on the ground; to cut off ISIL’s financing; to counter its hateful ideology; and to stop the flow of fighters into and out of the region.”

White House statement, Nov. 7, 2014: “As a part of our strategy for strengthening partners on the ground, President Obama today authorized the deployment of up to 1,500 additional U.S. military personnel in a noncombat role to train, advise and assist Iraqi security forces, including Kurdish forces. The president also authorized U.S. personnel to conduct these integral missions at Iraqi military facilities located outside Baghdad and Irbil. U.S. troops will not be in combat, but they will be better positioned to support Iraqi security forces as they take the fight to ISIL.”

Defense Secretary Ash Carter, Oct. 23, 2015, following the death of Master Sgt. Joshua Wheeler in a raid to free Islamic State hostages in Iraq: “We’ll do more raids. It doesn’t represent us assuming a combat role. It represents a continuation of our advise-and-assist mission. … We do not have combat formations there, the way we did once upon a time in Iraq.”

Carter, Dec. 1, 2015, before the House Armed Services Committee: “In full coordination with the government of Iraq, we’re deploying a specialized expeditionary targeting force to assist Iraqi and Kurdish peshmerga forces and to put even more pressure” on the Islamic State.

“…That creates a virtuous cycle of better intelligence, which generates more targets, more raids and more momentum. … It’s not war in a technical sense, but this is serious business. It feels that way to our people.”