Navigating a web of power, people and politics in Panjwai 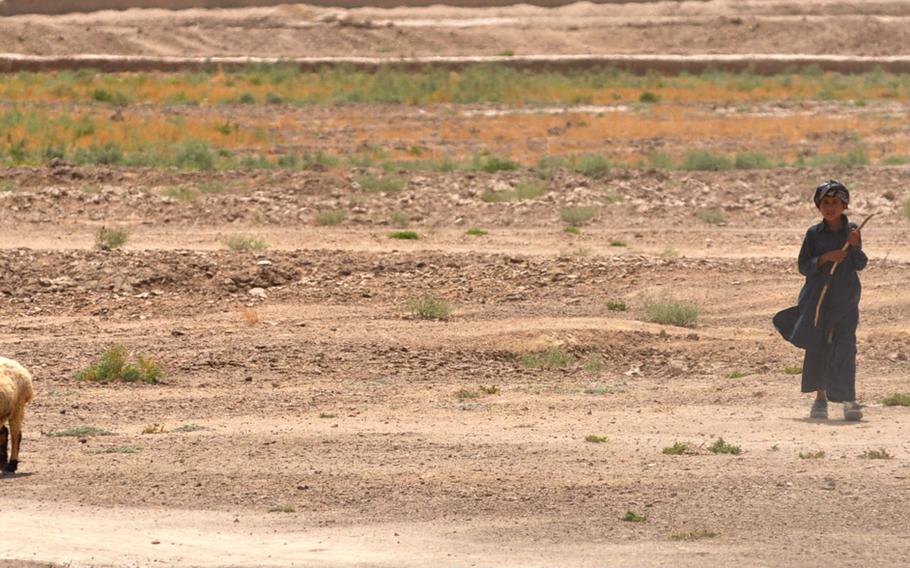 A boy in Panjwai district stands by the roadside with a flock of sheep. The leaders of 1st Squadron, 2nd Cavalry Regiment are finding that Panjwai is a difficult social puzzle to understand. (Cid Standifer/Stars and Stripes)

A boy in Panjwai district stands by the roadside with a flock of sheep. The leaders of 1st Squadron, 2nd Cavalry Regiment are finding that Panjwai is a difficult social puzzle to understand. (Cid Standifer/Stars and Stripes) 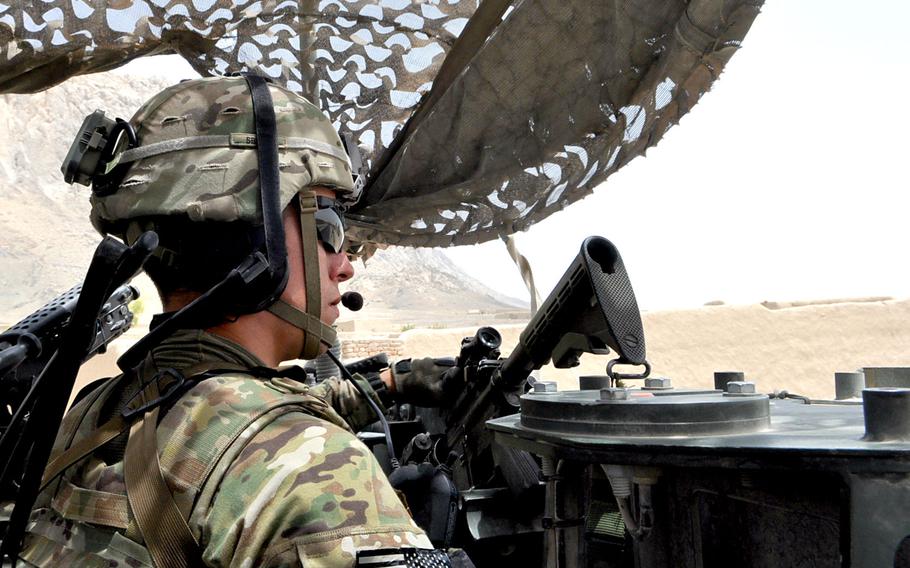 Staff Sgt. Brandon Bamford mans the gun on a Stryker vehicle while riding the "Panjwai 500," the main East-West road in the district of Kandahar province. The 2nd Cavalry Regiment is trying to build an understanding of the people who live in Panjwai district. Bamford said children are still liable to hurl rocks at passing American vehicles. (Cid Standifer/Stars and Stripes) 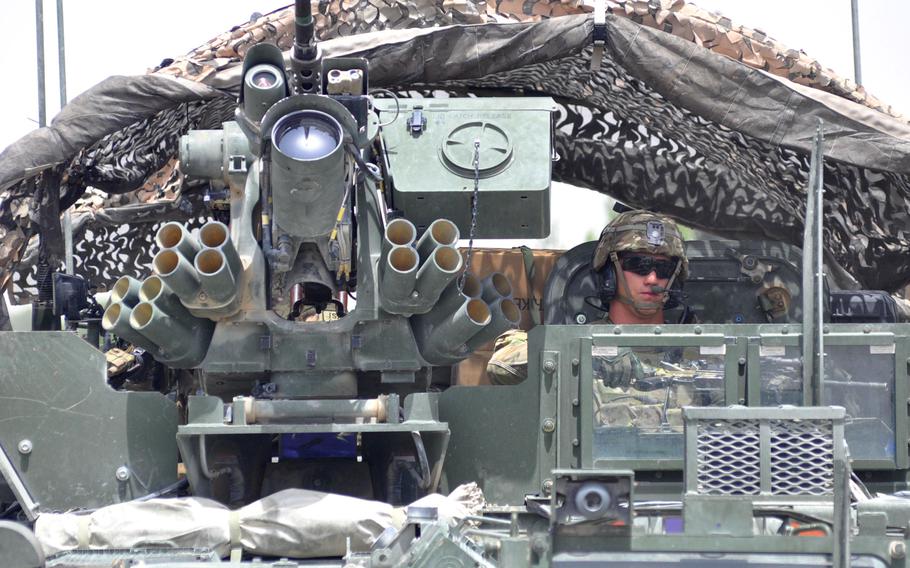 A soldier peers out of a Stryker vehicle as his convoy rides down the "Panjwai 500," the East-West thoroughfare from Forward Operating Base Shoja to FOB Zangabad. The leaders of 1st Squadron, 2nd Cavalry Regiment are finding that Panjwai is a difficult social puzzle to understand. (Cid Standifer/Stars and Stripes) 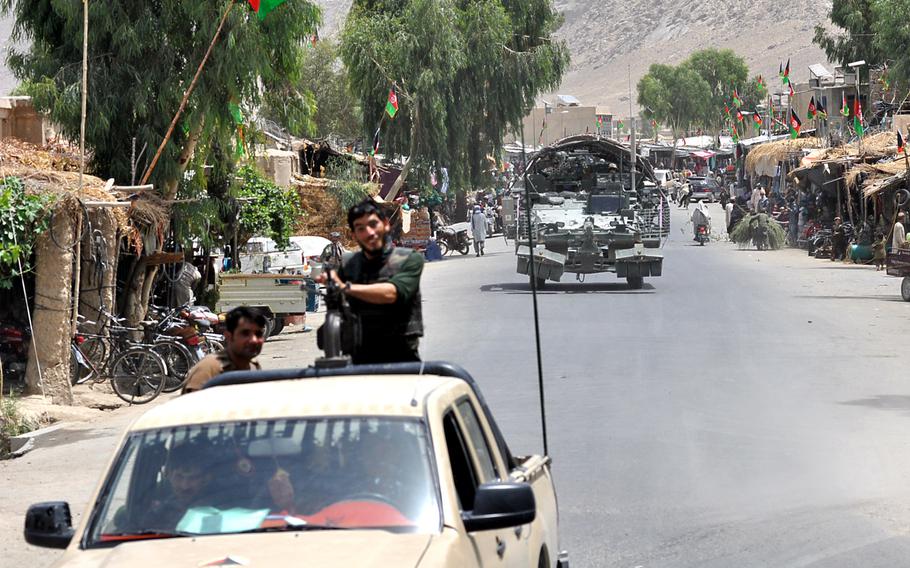 As American soldiers rolled through a busy market shortly before the post-Ramadan holiday of Eid in Panjwai district, an Afghan National Army truck joined the convoy. The ANA and Americans are allies, but Staff Sgt. Brandon Bamford with the 1st Squadron, 2nd Cavalry Regiment said he put his gun on its semi-automatic setting when the Afghan soldier had the truck's gun pointed directly at him. (Cid Standifer/Stars and Stripes) 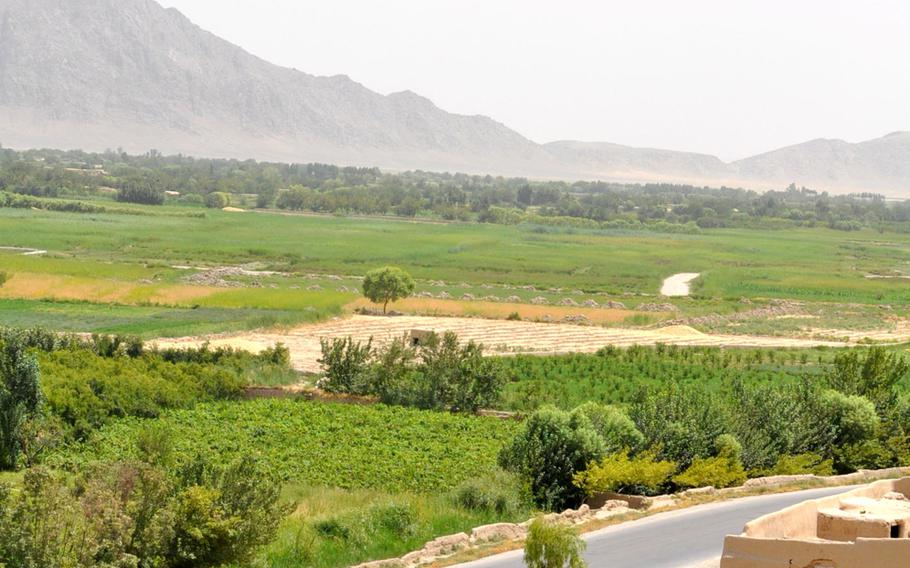 The view out over Panjwai from Forward Operating Base Masum Ghar. Panjwai, a socially complicated district in the critical province of Kandahar, is an excellent place to grow grapes. It's also fertile ground for marijuana and opium poppies. First Squadron, 2nd Cavalry Regiment, the new unit on the ground here, is still trying to decipher local networks. (Cid Standifer/Stars and Stripes) 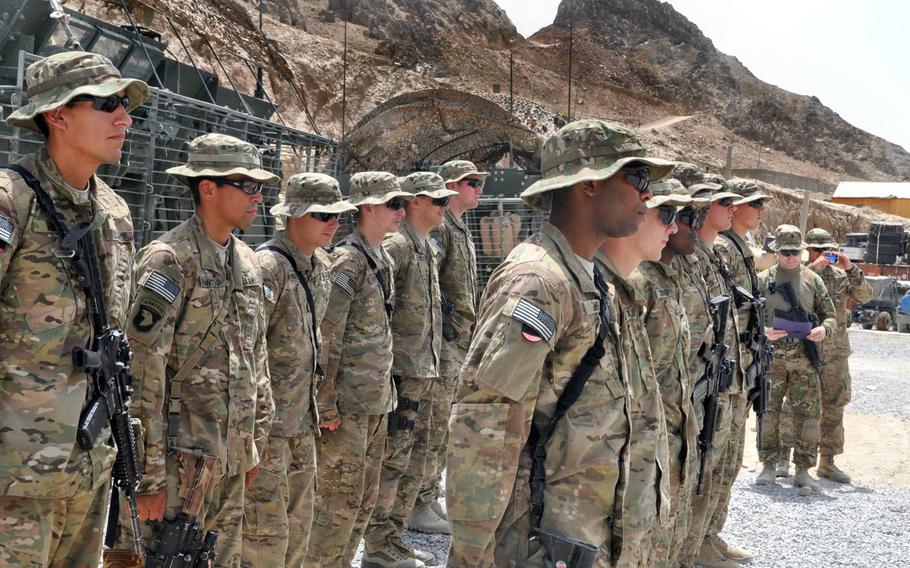 Members of Company A, 1st Squadron, 2nd Cavalry Regiment line up for a promotion ceremony at Forward Operating Base Masum Ghar. The unit's leaders are still trying to learn their way around complex local politics in Panjwai district in Kandahar province. (Cid Standifer/Stars and Stripes)

It was handed down from the unit he took over from in July.

Some descriptions are short on detail, for example, when so-and-so was appointed to his position. Others are more caustic, labeling officials as “coward,” “greedy” or “thief,” based on bitter experience.

Gage is no stranger to mining rocky human terrain. He deployed twice to Iraq, where he had to build relationships with local leaders in 2008 and 2010.

There, he spoke the language fluently and, having spent a tour in Saudi Arabia, he was familiar with Arab culture.

But the Panjwai district in southeastern Kandahar province — sandwiched between Pakistan and restive Helmand province — is an opaque maze of tribal identities. While most in the region are Pashto, the villages are a mishmash of sub-tribes and family loyalties, each with unique motivations and intrigues. The web of connections stretches to powerful people living in Kandahar City, the south’s major population center, and sometimes as far as Kabul.

That’s where the chart comes in.

American troops have struggled since the beginning of the war here to understand the nuances of local politics, and social blind spots are a minefield for the NATO coalition.

“A lot of people are interested in the politics of Panjwai,” Gage said. He finds himself asking, “Why does everyone care so much about this piece of dirt?”

Deep in the Taliban stronghold of Kandahar province, Panjwai has always been a tough fight for the Americans. Across the barren Registan Desert to the south lies Pakistan, where it is said insurgents cross the red sand dunes to smuggle in goods and people.

In recent years, coalition and Afghan government forces have pushed most of the fighting out of the eastern half of Panjwai. The western half, however, is still a brutal place.

On a convoy through the district from Forward Operating Base Shoja in the east to FOB Zangabad in the west — a route called the Panjwai 500 by U.S. soldiers — marijuana fields gradually became as common as the area’s most popular legal crop, grapes. Gage said that when opium farming season is in full swing, poppies pop up along the road.

“There’s marijuana out here. There’s poppy out here. That means there’s money out here,” Gage said. While the Taliban presumably profit from the drug trade, as they do across the country, Gage said he’s not sure where all the money is going, or all the drugs.

On a recent hot summer night, Gage gathered his troops for their daily briefing. Intel reports revealed which supposed friend was meeting with which suspected enemy, which government fighters were rumored to have unofficial ceasefires with local insurgents, and which of those rumors had been torpedoed by recent battles.

Americans at FOB Zangabad have seen bloody politics play out before their eyes. Through the camera-wielding blimp tethered above the base, they watched an elderly man execute someone.

They had a hunch the older man was Taliban, but Gage said it could have been anything from a common crime to an honor killing. Without any solid evidence that the murder was part of the war, Gage said, the Americans showed the video to local law enforcement, but could do nothing more.

What do Afghans want?

When an Afghan employeed by American Special Forces was accused earlier this year of torturing and murdering up to 15 civilians within spitting distance of an American military base in Wardak province, the head of coalition special forces said the tangled politics of the area likely played a role.

“Truthfully, I don’t think we were as wary and as attuned to the political lines in that particularly contentious district ... politics that almost to this day kind of befuddle me,” Commanding General of the Special Operations Joint Task Force Afghanistan Maj. Gen. Tony Thomas said at a May news conference.

Asked if he feared a similar disaster could play out in Panjwai, Gage said, “Absolutely.”

Much of the fight, in Panjwai and across Afghanistan, could come down to one question: What do Afghans want?

“Do they really want schools?” Gage wondered aloud. “I don’t know. They’re an agrarian-based society ... They might just want to be left alone and farm like they have for 100 years.”

Sometimes it seems all the people here want is security. At least, that’s the message he gets from the Afghan Local Police, who are paid to provide it.

The soldiers are trying to get a better grasp on local nuances. Gage is picking up Pashto, at least enough to laugh at the Afghan police commander’s jokes before the linguist translates them.

Even as the Americans work to grasp the social terrain, however, the ground continues to shift.

Capt. Mike Cooke, Company A commander at FOB Masum Ghar, a place tucked behind an Afghan base in a dramatic cluster of mountains, visited the region in 2011 when he had a regiment-level role. But back then, he said, the international community was pumping much more cash into development projects. That made the dash for development dollars a vital part of Panjwai politics. Now, aid money has shrunk, and the balance of power has shifted.

Figuring out the American role with Afghans in the lead has been a challenge, he said. This time around, Cooke said, his job is “100 percent about relationships.”

Oddly, livestock have been a way for the Afghans and Americans to get closer.

A goat was tackled by Americans and wrestled into the back of a Gator vehicle after three days of gamboling around the base. The Americans returned it to their Afghan counterparts.

Col. D.A. Sims, head of the 2nd Cavalry Regiment, acknowledged that any given district of Afghanistan is a puzzle, but recognized Gage’s skills: “I have great confidence he’ll figure it out.”