General view of the meeting room during the meetings of NATO Ministers of Defence in Brussels on June 15, 2016. (NATO)

General view of the meeting room during the meetings of NATO Ministers of Defence in Brussels on June 15, 2016. (NATO) 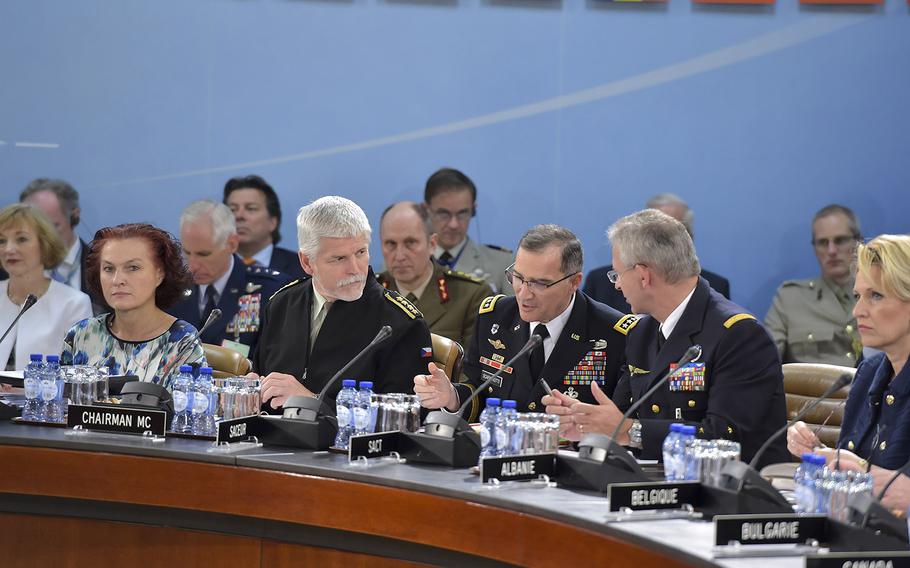 NATO will continue to deploy troops to military hubs across Afghanistan into 2017 as part of an extended training mission that will ensure an alliance presence, NATO’s top official said Wednesday.

“We will have a flexible regional approach, meaning we will be in Kabul but also out in the different regions,” NATO Secretary-General Jens Stoltenberg said Wednesday after two days of high-level talks in Brussels with the alliance’s 28 defense ministers.

The decision to keep a “hub and spoke” style presence — as President Barack Obama weighs whether to move forward with a planned drawdown later this year — offers allies more flexibility as the alliance presses forward with a train and advise mission in the country. While NATO had already committed to extend its 15-year presence in Afghanistan, it was expected that it would pull forces from regional bases into a centralized training center in Kabul in 2017.

In the year ahead, allies will determine precise troop levels, but several member states have already committed to the mission, Stoltenberg said.

Defense Secretary Ash Carter, who said Obama would be examining troop levels in the months ahead, welcomed NATO’s decision.

U.S. plans still call for slashing the current American troop presence from 9,800 to 5,500 by the end of 2016, but concerns about gains by the Taliban mean those numbers could change.

NATO’s decision to keep a wider footprint comes as Afghan forces suffer high casualties in their fight against the insurgents, who have proved resilient despite the international military campaign that started with the ouster of the Taliban regime in 2001.

Last week, the White House granted more flexibility to U.S. forces on the ground, authorizing troops formally on a training mission to take part in combat operations as needed.

“It will help the Afghans in an important moment for their country,” Carter said.

In Brussels, allies also examined ways to contribute more to the U.S.-led campaign against the Islamic State group in Iraq and Syria. Areas of focus include the potential for a larger NATO role when it comes to training Iraqi forces as well as providing logistical support as Iraqi units move against Islamic State strongholds.

“We need to do more, not only as individual nations, but as an alliance,” Carter said.

Carter said NATO could play a more central role in other areas, such as coordinating force-generating efforts among allies, as well as command and control. However, no decision on such a role was reached at the ministerial meeting in Brussels and the issue will likely be revisited next month when NATO will hold a major summit in Warsaw, Poland.

The military alliance also will consider how it can provide direct support to the U.S. coalition with AWACS surveillance aircraft, which would help partners get a clearer picture of the battle space in Syria and Iraq.

In Warsaw, allies are expected to decide on an expanded training mission for the Iraqi military inside Iraq, one that would build on a current effort in neighboring Jordan.

“The challenges we face require us to do more,” Stoltenberg said. “And that is what we discussed today, is how we can step up our efforts on projecting stability beyond our borders.”

NATO also is looking at a maritime security mission in the central Mediterranean Sea, where warships could be deployed as part of an effort to conduct counter-terrorism patrols, Stoltenberg said.

Decisions on the shape and size of such a mission are under review.

In February, allies agreed to send ships into the Aegean Sea to help Turkey and Greece as those countries contend with a migrant crisis sparked by the civil war in Syria. Carter said the Navy will dispatch the USS Grapple to support that effort.

While allies spent much of Wednesday on threats to the south, a day earlier members were focused on backyard security challenges. As expected, allies agreed Tuesday to establish four multinational battalions of up to 1,000 troops each, which will serve on a rotational basis in Estonia, Lithuania, Latvia and Poland.

The enhanced presence along NATO’s eastern flank is intended to serve as a source of reassurance to members in the region nervous about potential Russian aggression.

The U.S. has pledged to be one of four framework nations for the battalions, joining Germany and the United Kingdom. A fourth framework country is yet to be named.