An Afghan girl plays in the dirt at a camp in Kabul for refugees who have returned from Pakistan. Women and children in Afghanistan are especially vulnerable when displaced by violence and economic hardship. (Josh Smith/Stars and Stripes)

An Afghan girl plays in the dirt at a camp in Kabul for refugees who have returned from Pakistan. Women and children in Afghanistan are especially vulnerable when displaced by violence and economic hardship. (Josh Smith/Stars and Stripes) Children play in a camp in Kabul set aside for refugees who returned from other countries. Despite returning to their home country, many refugees nonetheless found themselves stuck in such camps for more than a decade. (Josh Smith/Stars and Stripes) 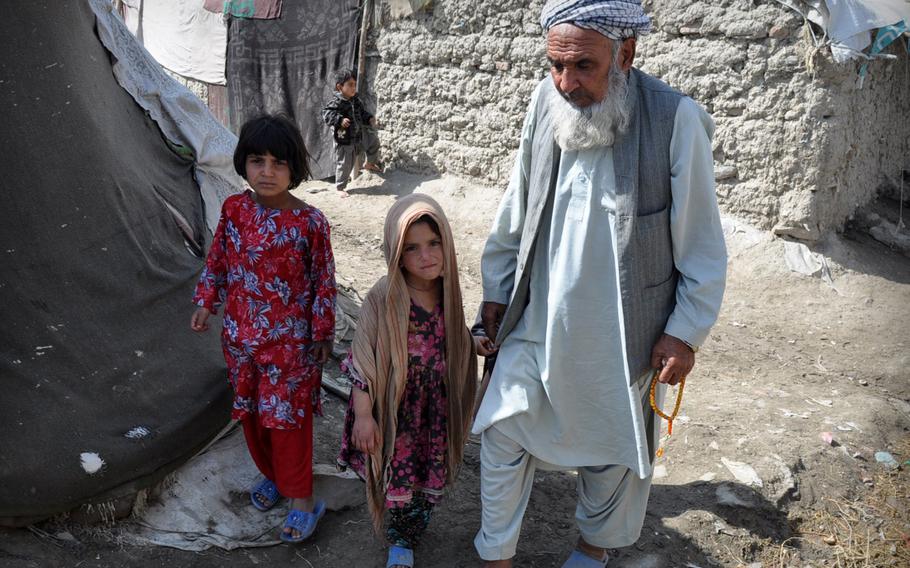 Millions of Afghans who fled during decades of wars sparked by the Soviet invasion of the 1980s returned after the Taliban fell. But many are having second thoughts after finding little opportunity in squalid camps around the country such as this one in Kabul. (Josh Smith/Stars and Stripes) 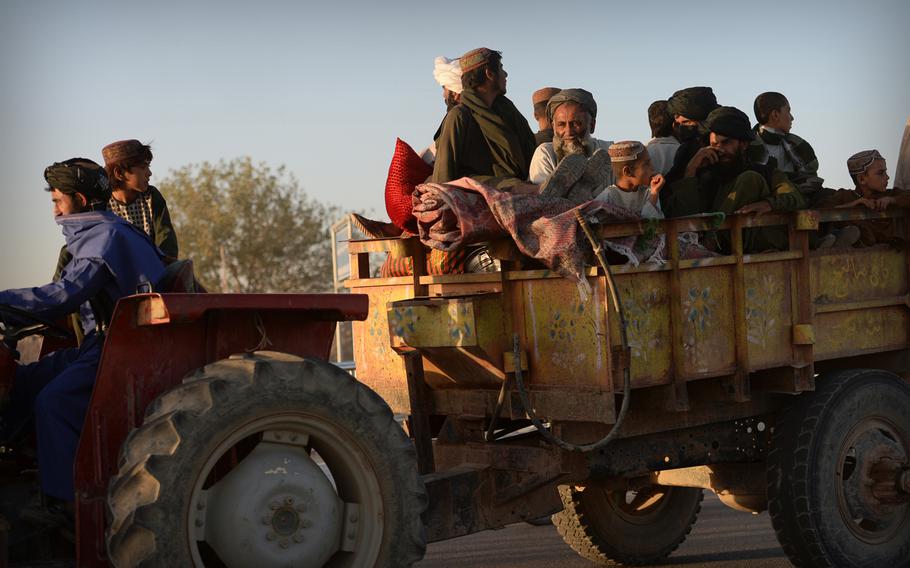 Residents of Sangin district in southern Afghanistan in September fled flighting that has rocked the area for most of 2014. Aid officials say at least 140,000 more Afghans have been displaced by fighting in 2014 alone. (Josh Smith/Stars and Stripes) 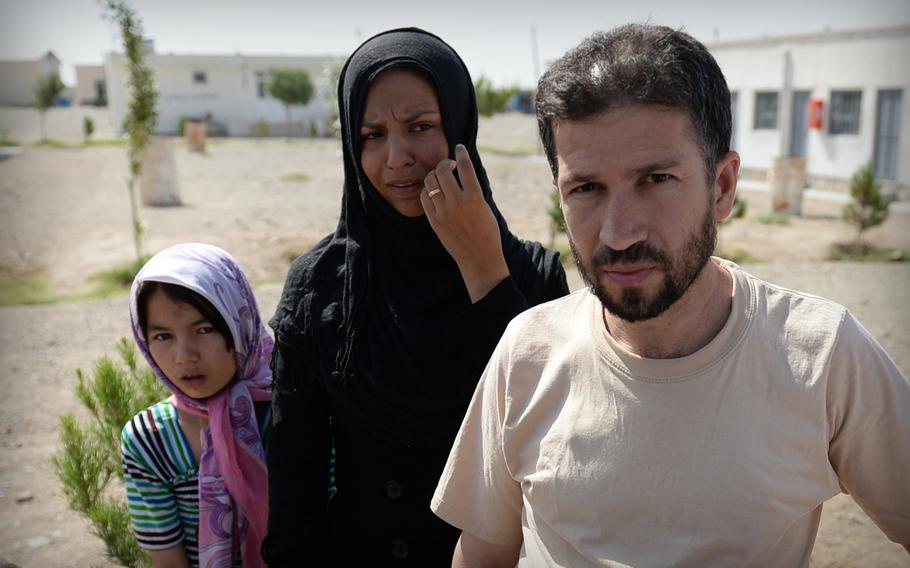 Nargis Amiri, center, cries as she recalls harassment by Iranian officials who deported her, her husband, and daughter back to Afghanistan. The small family, which had been hoping for a chance to find better work in Iran, had only a few days to spend at this United Nations camp in Herat province in July 2014. (Josh Smith/Stars and Stripes) During a temporary stopover at a United Nations camp in Herat, Nazar Mohammed, 40, seen here in a photo from July 2014, points out injuries he sustained as a soldier fighting for Afghanistan's communist government in the 1990s. When the Taliban came to power he took his family to Iran, but more than a decade later they skipped meals to save money to return to Afghanistan. (Josh Smith/Stars and Stripes) Afghan refugees cross the border back into Afghanistan after being deported from Iran in July 2014. Aid officials say economic hardship is driving many Afghans to seek better opportunities in other countries. (Josh Smith/Stars and Stripes) 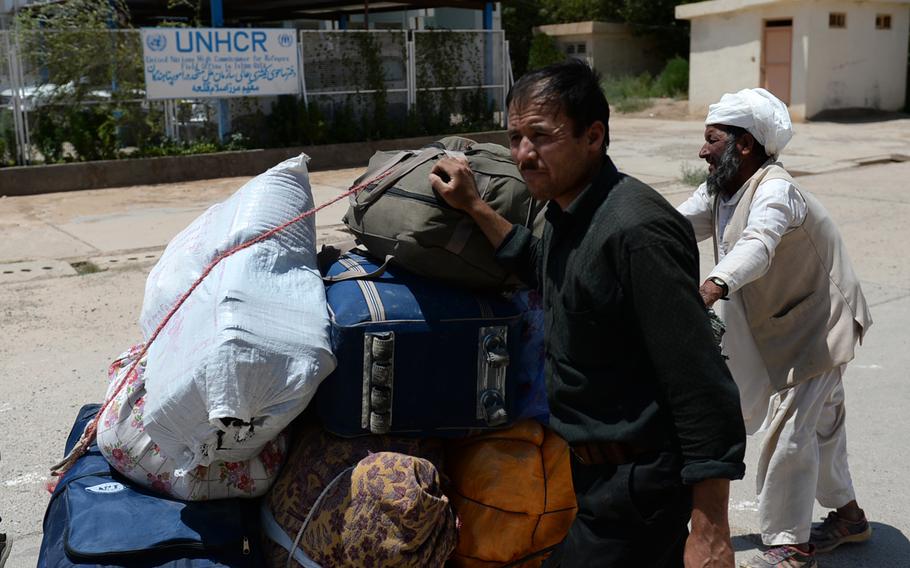 Afghan refugees cross the border back into Afghanistan in July 2014 after being deported from Iran. Aid officials say economic hardship is driving many Afghans to seek better opportunities in other countries. (Josh Smith/Stars and Stripes) 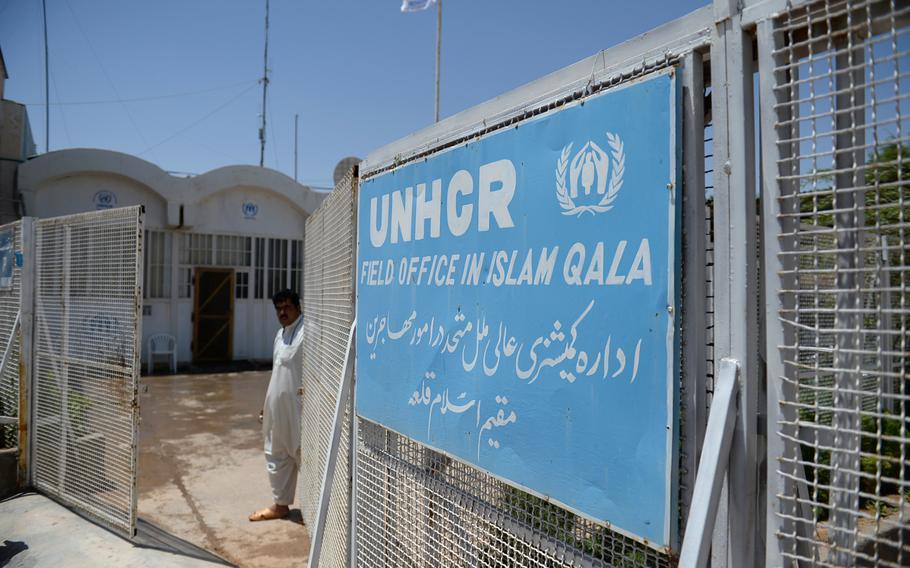 This United Nations office on the border between Iran and Afghanistan represents a small portion of the international effort to help Afghan refugees return home. The U.N. says it has helped nearly 5 million Afghans return since the fall of the Taliban. (Josh Smith/Stars and Stripes) 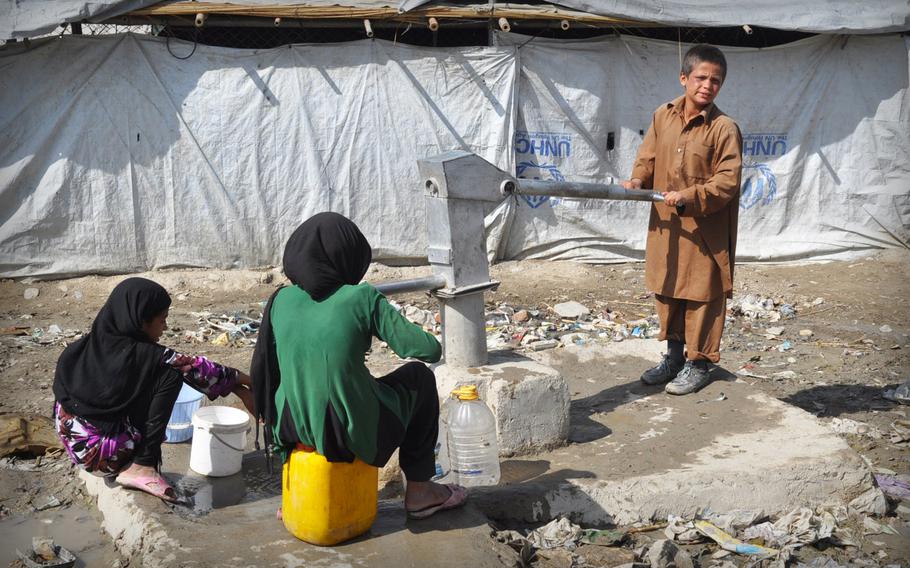 Afghan children pump water at a camp for internally displaced people in Kabul, Afghanistan on October 2013. Some 800,000 Afghans remain displaced inside their own country despite years of international intervention. (Josh Smith/Stars and Stripes) Feda Mohammed, 45, says eight years after returning from exile in Pakistan, he's having second thoughts about staying in Afghanistan, where he lives in a camp for displaced people in Kabul. ?This is my country, but it was better in Pakistan,? he said. (Josh Smith/Stars and Stripes) Camps for internally displaced such as this one in Kabul in December 2014 are being cleared to make way for new high-rise buildings. The refugees who have occupied the camps for more than a decade have mixed feelings about moving. Some hope for better shelter, while mourning the jobs they will lose by leaving. (Josh Smith/Stars and Stripes)

For the better part of a decade, 45-year-old Mohammed, his wife, and eight children have been among several dozen returned refugees occupying makeshift tents and shacks on a small vacant lot on a street corner in Kabul. He has a job as a city sanitation worker, but the $80 per month salary barely covers the family’s food.

As Afghanistan slips deeper into another winter, hundreds of thousands of returned refugees and others will be trying to survive another cold season while facing a future as uncertain as ever.

Record numbers of Afghans left the country during the 1980s and 1990s after the Soviet invasion triggered decades of war. Many came back after the U.S.-led invasion toppled the Taliban regime in 2001. More than 5.8 million refugees — roughly a fifth of Afghanistan’s entire population — returned.

But after more than a decade of international intervention, U.S.-led forces have failed to end the stubborn insurgency destabilizing the country. Fewer Afghan refugees are trying to return than during any time since 2002, even as increased violence sends new waves of people fleeing their homes.

It’s one of the largest and most protracted refugee crises in the world, and like many of Afghanistan’s problems, it’s far from solved.

Like millions of other Afghans, Mohammed fled to Pakistan decades ago during the Soviet invasion. He returned full of hope after the allied invasion. But now he regrets ever returning.

“This is my country, but it was better in Pakistan,” he said, standing amid a handful of tousled children bundled in layers of bright clothes against the biting cold. “Here there are no jobs and no security.”

Many refugees and internally displaced persons are gathered in camps. Others are taken in by relatives, just more nameless faces in a sea of humanity struggling to make a life in a country still torn by war and shackled by economic malaise.

More than 2.5 million Afghan refugees still remain in other countries, mostly neighboring Pakistan and Iran. But as NATO’s international military coalition continues its drawdown, economic concerns and rising violence have slowed the voluntary return flow to just 16,000 in 2014, less than half of what it was the year before.

A question of opportunity At a United Nations-run facility for the displaced in Herat near the western border with Iran, Nargis Amiri, 29, is distraught. She, her husband, and daughter fled Afghanistan five years ago seeking better economic opportunity in Iran.

After struggling for years to find a footing there, she says the Iranian government made their lives a nightmare. “The soldiers hit us and made us sit in the hot sun for hours and hours,” she said, tears filling her eyes. “We had no food and when we tried to buy some, the soldiers stole our money.”

Countries like Iran can offer better economic opportunity and therefore a higher standard of living, but refugees can face fickle and sudden harassment or changes in official policies that make it impossible to stay.

Now Amiri and her family feel trapped between a life with no options in Afghanistan, and what they see as a better economic life now out of reach across the border.

Both aid officials and returning refugees cite economic challenges as a key reason why many remaining refugees are loath to return to Afghanistan. Almost 36 percent of Afghans live below the poverty line, three times the 12 percent poverty rate in Pakistan, according to World Bank statistics. And about 35 percent of Afghans are unemployed.

After 2001, Afghanistan’s economy quickly improved due to the flood of international aid. But the CIA’s own public assessment acknowledged that living standards remain among the lowest in the world and that growth “slowed markedly” in 2013. “Much of the population continues to suffer from shortages of housing, clean water, electricity, medical care, and jobs,” the agency noted in its fact book. “Criminality, insecurity, weak governance, lack of infrastructure, and the Afghan Government’s difficulty in extending rule of law to all parts of the country pose challenges to future economic growth.”

Returning refugees have access to a range of international aid programs such as grants of about $200 to help with transportation and other reintegration costs, shelters to stay at temporarily, briefings on legal aid and education, and vaccinations for children.

The Afghan government has been allocating land to returning refugees and other displaced people, but it has a limited ability to provide other services like education and health care.

“Many of the refugees lose everything when they try to come home,” said Hamidullah Khatibi, an official who oversees refugees in Herat province. “Our government doesn’t have the resources to help them all, and now we’re competing with places like Syria and Palestine for international aid.”

Many Afghans who do return are being drawn to cities by the prospect of better economic opportunities, even though the reality is there are rarely more options, said Danielle Moylan, a Kabul-based Protection and Advocacy manager with the Norwegian Refugee Council.

Still running It’s not just millions of refugees in Pakistan and Iran who are affected by Afghanistan’s troubles.

As many as 800,000 Afghans are still considered internally displaced, and aid agencies say 140,000 more people have joined them in 2014 due to the escalating insurgency.

In southern Helmand province, Haji Mohammed Hydar is one of many residents who fled fighting in Sangin district this summer. He and 12 members of his family moved to the provincial capital.

“We had to leave,” he said. “We are not safe anywhere. And there are many more behind us who want to leave but don’t have the money to.”

The increased violence has not only sent more people packing, it has made tracking and helping them harder, Moylan said. “Conflict–induced IDPs can only be counted where the UN and humanitarian NGOs can still have access, and for this reason we think that the figures are conservative, and could become even more so if we are unable to work in areas due to safety concerns.”

Despite the challenges, thousands of Afghans are braving the odds to try to find a better life.

For months, Nazar Mohammed, 40, his wife, Sorya, 37, and their three children skipped meals to save up money so they could return from Iran where they had lived for 16 years.

A former soldier under the communist regime, Nazar fled from the Taliban. For years he worked and lived in Iran, but it never felt like home.

“We don’t know where we are going,” he said, sitting in an empty room at the U.N.’s camp in Herat, surrounded by the suitcases and plastic bags holding all the family’s belongings. “But we hope it will be better.”