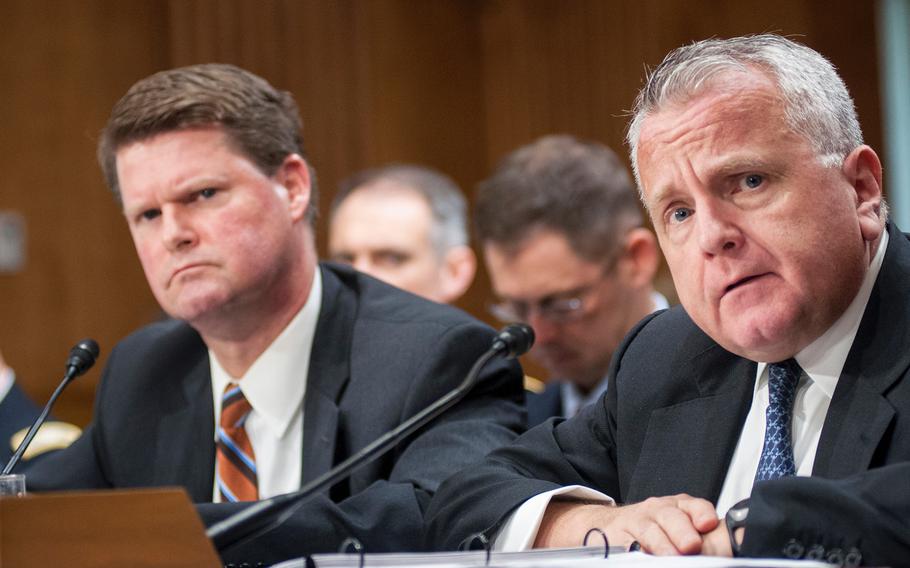 WASHINGTON — A Senate panel expressed frustration Tuesday over whether the latest strategy in Afghanistan will finally find an end to America’s longest war.

In a series of sharp questions and comments, the Senate Foreign Relations Committee took top state and defense officials to task over past missteps and future plans to resolve the war in Afghanistan.

Among those concerns: Annual U.S. costs to run the war in Afghanistan now exceed $45 billion; the Taliban has gained control of more territory, and a lack of transparency and mixed-messaging now cloud U.S. war efforts.

“After sixteen years, thousands of lives, probably trillions of dollars spent, the Afghans don’t seem to be able to defend themselves,” Sen. Rand Paul, R-Ky., railed during the hearing. “I see no hope for it and I feel sorry for putting the military in this position… I don’t fault the military, I just don’t think there is a military solution.”

Deputy Secretary of State John J. Sullivan and Randall Shriver, Department of Defense assistant secretary for Asian and Pacific security affairs, testified at the hearing and said they understood the lawmakers’ frustration. However, they said they are confident in the new strategy in Afghanistan, which was unveiled by President Donald Trump in August.

“The scrutiny is understandable. I would share every frustration you share about the time and investment,” Shriver said. However, “I do think the approach that we’ve adopted…I think gives us a better chance to achieve results on the battlefield, which will give us a better chance at the political settlement.”

“It’s been nearly six months since the administration announced its new strategy for South Asia, which as far as I can tell is quite similar to the old strategy,” said Sen. Bob Menendez, D-N.J. “I understand the administration is focused on conditions-based metrics for success for eventual withdrawal of U.S. forces but I hope we can get a little more clarity to what exactly are our desired outcomes are for our troops and our foreign policy goals in Afghanistan.”

Amid growing reports that the Taliban and the Islamic State might be gaining ground in Afghanistan, senators shared confusion how the United States will find a solution under the latest shift in direction.

“Things are not going well today in Afghanistan,” said Sen. Chris Murphy, D-Conn. “The U.S.-backed coalition controls less territory than ever before. Insurgents control more than ever before.”

Murphy and other Democrats on the committee also shared frustration over a lack of transparency from military officials and mixed messages from administration and military leaders.

Last week, Trump said there would be no negotiating with the Taliban in potential peace talks.

The next day, Sullivan said during a visit to Kabul, the Afghan capital, that the United States remained committed to forging peace talks between the Taliban and the Afghan government. Sullivan reiterated that position Tuesday before the Senate committee.

Sullivan tried to explain that Trump was referring to members of the Taliban behind terrorist attacks such as the ones seen last month. But there are Taliban members who might negotiate, he said.

However, Sullivan and Shriver couldn’t detail figures for how many members of the Taliban are in Afghanistan and what share would be open to talks.

The lack of information tied into other concerns for several Democrats on the panel. The senators pointed to a report last week showing a federal investigator was blocked from providing specific details about the U.S. war effort in Afghanistan.

The Pentagon reversed part of that concern the following day, saying the lack of information was the result of a mistake in communications with the Special Inspector General for Afghanistan Reconstruction, or SIGAR.

New details revealed showed 44 percent of Afghanistan is contested or under the control of insurgents such as the Taliban. But other details on Afghan security forces, such as the number of casualties, have not yet been shared.

Despite new assurances of a potential for success, Paul said an assessment is needed on whether the conflict still has anything to do with its original 2001 war authorization.

It is also not clear with whom the United States should negotiate a political settlement and why a smaller U.S. force now will accomplish more than 100,000 servicemembers did when they were deployed to the region in past years, he added.

“There’s an argument to be made that our national security is actually made more perilous the more we spend and the longer we stay there,” Paul said. Instead of the war effort, “I’d give the military all a pay raise and bring all the people home from Afghanistan. I’d upgrade the nuclear arsenal. There’s all kinds of things we could do.”

Sullivan said he agrees there isn’t a military solution in Afghanistan, though the military must be part of the plan and leaders are moving forward with the minimum number of troops and funding needed to back the Afghan government in their quest against insurgents.

Sen. Bob Corker, R-Tenn., struck a conciliatory tone in hopes that the new strategy is indeed the right plan.

“We know you came into office a year and a month ago. This is something you inherited,” he told Sullivan and Shriver. “Most of us appreciate a conditions-based approach. We’re all struggling just like you are trying to figure out a path forward where it’s pretty murky right now. I do think the strategy that you’ve laid out is a better strategy to that end.”