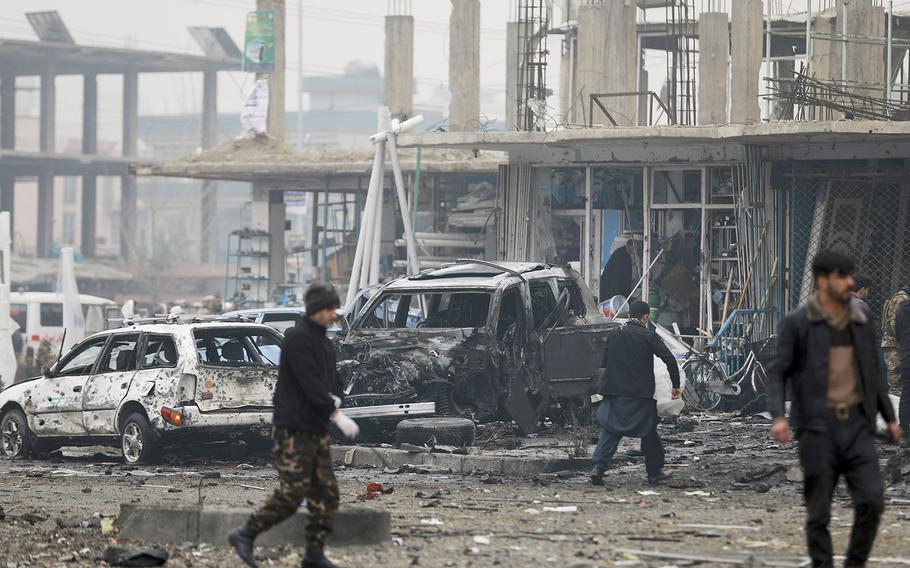 The blast adds to the near daily attacks seen in Kabul since the Taliban and government started peace talks in September, and comes as the U.S. remains on course to reduce the number of American troops in the country to the lowest level since the beginning of the war.

Wardak was wounded but in “good condition,” Andarabi said.

Children and elderly people were among the victims, and homes near the blast site were severely damaged, the Interior Ministry said in a separate statement.

No group immediately claimed responsibility for the blast, which came a day after five rockets were fired onto Bagram Airfield, the largest U.S. base in Afghanistan. The U.S. military said no casualties or damage resulted from that attack.

The Taliban have vowed to refrain from attacking international forces and Afghan cities as part of a U.S.-Taliban deal signed in February, and the local Islamic State affiliate has claimed most large attacks in recent months.

But smaller attacks, such as Sunday’s targeting high-profile Afghans, have become a frequent occurrence in Kabul and other parts of the country, and many government officials have put the blame on the Taliban.

In September, a bomb targeting Vice President Amrullah Saleh detonated in central Kabul, killing 10 civilians. The Taliban denied involvement, but explosives found at the scene were linked to the Taliban-affiliated Haqqani Network, the Interior Ministry said.

In a statement condemning Sunday’s bombing, President Ashraf Ghani said the Taliban should stop violence against civilians and agree to a ceasefire. But he didn’t directly blame the group for the blast.

Wardak, a prominent businessman as well as a member of parliament, was the second lawmaker attacked in a week. On Dec. 13, a bomb attached to the car of parliamentarian Tofeq Wahdt killed his driver and security guard and left him wounded. No one claimed responsibility.

Two days later on Dec. 15, a bomb attached to the car of Kabul’s deputy provincial governor, Mahbobullah Mohibi, exploded, killing him and two others.

The perpetual violence has made Afghans more doubtful about future peace.

Optimism over the ongoing peace process dropped from 86% in the summer to 57% this fall, according to a survey by the Institute of War and Peace Studies, a Kabul-based think tank.

Despite the violence, the Trump administration announced last month that the U.S. would reduce the number of U.S. troops in Afghanistan to 2,500 by mid-January. Under the U.S.-Taliban agreement, all remaining troops could be withdrawn by May if the Taliban meets certain anti-terrorism requirements. Zubair Babakarkhail contributed to this report.wellman.phillip@stripes.com Twitter: @pwwellman