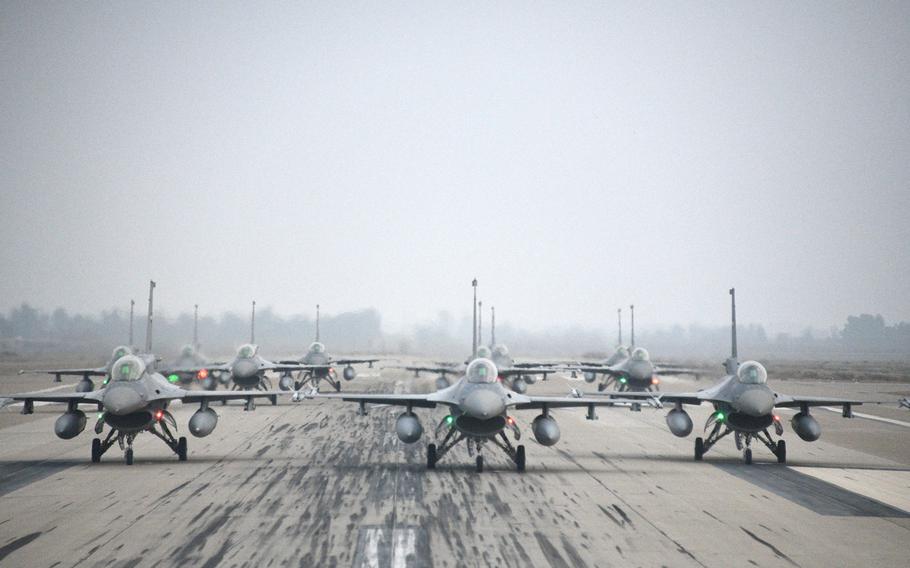 The Iraqi air force performs an F-16 ''elephant walk'' on Balad Air Base, Iraq, in December 2020. An uptick in attacks earlier this year forced U.S. contractors to leave the base where they had been supporting the Iraqi air force's Fighting Falcons. (Jorge Reyes/U.S. Army Reserve)

Increased threats and attacks by Iran-backed militias forced American contractors to evacuate Iraq’s Balad Air Base in March, where they were supporting Iraq’s F-16 program, a U.S. government report said this week.

Without the Americans, the Iraqis cannot perform the full range of maintenance tasks on the country’s fleet of F-16s, which are key in the fight against the Islamic State group.

Thirty-two of the 36 F-16 fighter jets Iraq received from 2014 to 2017 were inventoried at Balad last summer, and 75% were either fully or partially operational in December. In the first three months of 2021 they flew 299 sorties, the Lead Inspector General for Operation Inherent Resolve said in a quarterly report Tuesday.All but four of those sorties were training missions, it said.

The U.S. personnel were evacuated in March after a handful of rockets hit Balad in late February, days after a strike in Irbil killed a Filipino contractor and wounded a U.S. service member.

The contractors returned later in the month, but Defense Intelligence Agency officials told the IG that “the tactics employed by the militias this quarter suggest that they may be planning more attacks.”

The report was released hours after two rockets hit an empty square at al Asad Air Base and a day after several rockets struck Balad. There were no reports of casualties in either attack, but two weeks ago, The Associated Press reported that two foreign contractors were wounded in an attack on Balad.

The violence is aimed at pressuring a withdrawal of U.S. forces from the country, where some 2,500 American troops are helping train and advise Iraqi forces in planning, targeting, intelligence and other capabilities to fight ISIS.

“Each attack … undermines the authority of Iraqi institutions, the rule of law and Iraqi national sovereignty,” Marotto said.

Contractors and coalition military air advisors previously evacuated Balad in January 2020 as tensions between Washington and Tehran played out in Iraq in back-and-forth strikes, including the U.S. assassination of a top Iranian general at Baghdad International Airport and Iran’s retaliatory ballistic missile strike on two Iraqi bases.

Together with “the impact of COVID-19,” the unrest prevented employees of U.S.-based Lockheed Martin and Sallyport Global from directly supporting the F-16s, the IG said in a previous quarterly report. That caused Iraqi pilots “to lack confidence that their aircraft would be adequately supported,” U.S. Central Command told the IG.

As a result, the Iraqi F-16s didn’t fly combat missions from April to September 2020, when the contractors began returning.

Military air advisors are no longer housed at the base, and while U.S. Air Force advisers regularly visit Balad, the lack of a dedicated advising presence and secure communications have so far kept the F-16s of Iraq’s 9th Fighter Squadron off the coalition’s air tasking order.